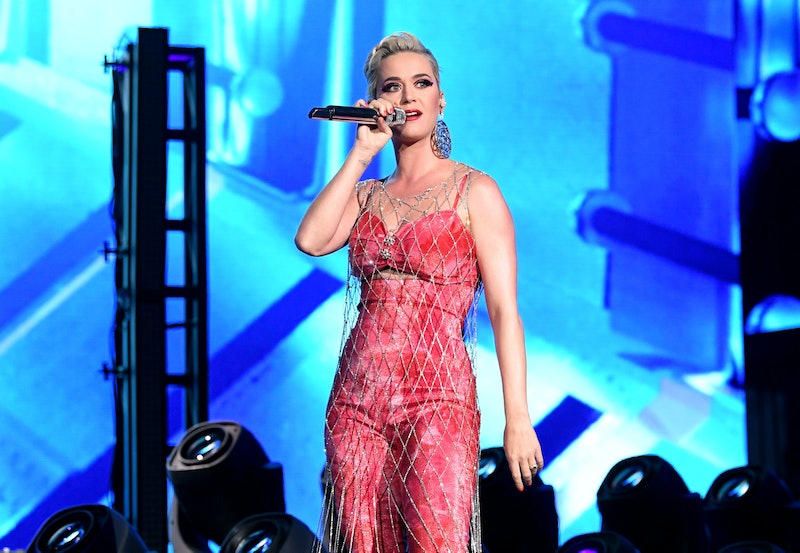 It's not every day that a niche artist wins a copyright infringement case against a mega pop star, but it does happen. On Monday, July 29, the AP reported that Katy Perry's "Dark Horse" lawsuit reached a verdict, and it wasn't good news for the singer. In court, a jury determined that "Dark Horse" had, essentially, copied "Joyful Noise," a Christian rap song by Flame, also known as Marcus Gray. Bustle reached out to Perry's lawyer and representation, as well as a representative for Flame, for comment, but had not received responses at the time of publication.

In the suit, per The New York Times, Gray and his fellow plaintiffs, co-writers Emanuel Lambert and Chike Ojukwu, alleged that the underlying beat of "Dark Horse" was identical to the one heard in "Joyful Noise." Meanwhile, Perry and her co-defendants — rapper Juicy J, Sarah Hudson (who co-wrote the lyrics with Perry), Lukasz "Dr. Luke" Gottwald, Max Martin, Henry Walter (aka Cirkut), and Capitol Records — denied these claims.

According to The Hollywood Reporter, both Perry and Dr. Luke told the jury that they had never heard the song by Flame. The Christian rapper, on the other hand, claimed that the two could have heard it playing during the Grammys or on YouTube or MySpace, where he claimed "Joyful Noise" was played "millions of times."

"Joyful Noise" was released in 2008, as part of Flame's Our World: Redeemed album, five years before Perry's "Dark Horse," which was nominated for a Best Pop Duo/Group Performance Grammy in 2014. That year, Juicy J and Perry performed the song at the Grammys, and the AP reported that it topped the Billboard Hot 100 early in 2014.

According to The New York Times, the similarities between the songs was not the only point of contention between the two parties. The outlet reported that Gray was not a fan of "Dark Horse" video. In fact, he reportedly argued that his reputation had been damaged by the "anti-Christian witchcraft, paganism, black magic, and Illuminati imagery evoked by 'Dark Horse,' especially in the music video version." (This isn't the first time that "Dark Horse" landed Perry in hot water, as the 2013 song's Egyptian-inspired music video prompted reporters to call it out for cultural appropriation.)

Following the ruling by the jury, the trial will move on to the next phase to determine how much money the plaintiffs will receive as a result of the jury's findings. However, Perry's lawyer did file a motion on Thursday, July 25, before the ruling, which asks U.S. District Judge Christina Snyder to essentially overrule the jury's finding based the proposal that "no reasonable jury could find copyright infringement based on the evidence presented at trial," as reported by THR. The motion is still pending.

It's unclear where the case will go next, but, as noted by The New York Times, cases like these can take years. As the paper reported, a case regarding Led Zeppelin's "Stairway to Heaven" is heading to the Ninth Circuit Court of Appeals in San Francisco this fall. So, depending on Perry's next steps, this might not be the end of this dispute.

More like this
Lizzo Twerks While Playing James Madison's 200-Year-Old Crystal Flute Onstage
By Radhika Menon
Everything To Know About Taylor Swift’s 10th Studio Album, 'Midnights'
By Grace Wehniainen and Jake Viswanath
Twitter Is Freaking Out Over Rihanna’s 2023 Super Bowl Halftime Show Announcement
By Stephanie Topacio Long
Snoop Dogg & Michelle Pfeiffer Lead Moving Tributes To Coolio
By El Hunt
Get Even More From Bustle — Sign Up For The Newsletter