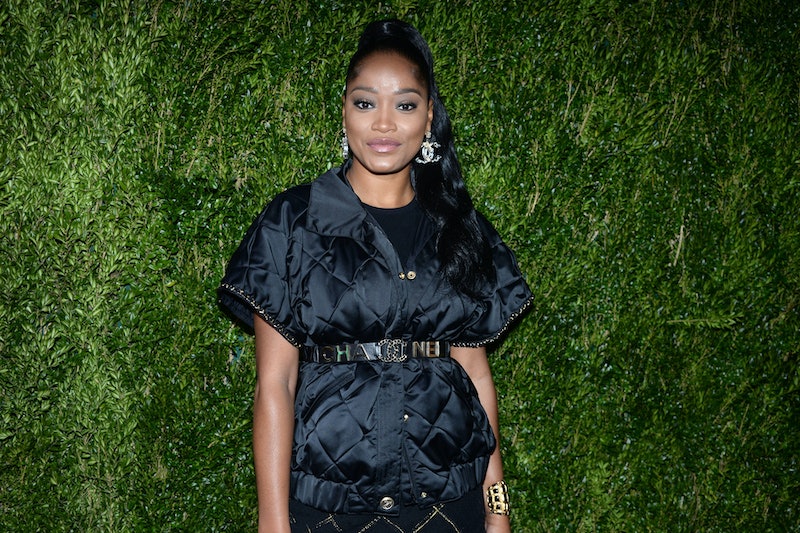 Several celebrities have shown up to march alongside protesters fighting to end police brutality and government oppression this week; however, there's one member of Hollywood's finest that is taking her actions a step further in the hope of creating a real change in the world. During a peaceful demonstration in Hollywood on Tuesday, June 2, Keke Palmer confronted the National Guard, asking them to march with the protesters fighting for racial justice. The powerful exchange was recorded by NBC News correspondent Gadi Schwartz, and has since gone viral.

"You have to pay attention to what's going on or else we have a president that's trying to incite a race war," Palmer explained in the video, referencing Donald Trump's recent comments where he threatened to mobilize armed soldiers against the protesters. "The borders are closed. We can't leave. We have people here that need your help," she implored. "This is when y'all stand together with the community, with society, to stop the governmental oppression. Period. We need you, so march with us."

But while the guards seemed to agree with Palmer and everything she had to say, they ultimately declined to join the protest itself, with one of the guardsmen insisting that he's unable to leave his post since they needed to remain in the area as "patrol" for businesses. "I’m at a loss," Palmer replied. And when they agreed to take a knee as a show of support for the cause, the Hustlers star is heard remarking off-camera that, at this point, taking a knee is simply "not enough."

The clip has since gone viral on social media, with many commending Palmer for her call to action. Palmer recently spoke with Good Morning America about her publicized plea to the National Guard and explained what inspired the conversation in the first place. "I was just talking to the people that I was marching with. I just posed the question of 'Why are they not with us? Why are they not able to be with us?'" she explained on GMA. "Here we are marching in peace and with purpose, and I'm sure many of them feel the same way as we do. I wanted us to just unite as human beings above all."

She also addressed why she didn't think their gesture of kneeling served a great enough impact. "Though the kneeling — it can be seen as a walk in the same direction — we all can also see that just moments after in some of these cities where we've seen the kneeling, we've seen the teargassing and everything, the chaos afterwards," Palmer stated. "I want to know that the people that are in these powerful positions of saving or taking a life, I want to know they're with the citizens and committed to taking a stand against the system and injustices."

She added, "If we are unified no matter who you are or what you're wearing we can create change. Buildings can be rebuilt, but once lives are taken, they're gone."

More like this
Twitter Is Identifying With Sally Field & Jane Fonda’s Friendship In New Viral Video
By Jake Viswanath
6 Organizations Fighting Police Brutality That You Can Support Right Now
By Syeda Khaula Saad and JR Thorpe
24 History-Making Black Women You Probably Didn't Learn About In School
By Ayana Lage and JR Thorpe
25 Inspiring Quotes From Black Women To Celebrate Black History Month
By Kyli Rodriguez-Cayro and JR Thorpe
Get Even More From Bustle — Sign Up For The Newsletter
From hair trends to relationship advice, our daily newsletter has everything you need to sound like a person who’s on TikTok, even if you aren’t.