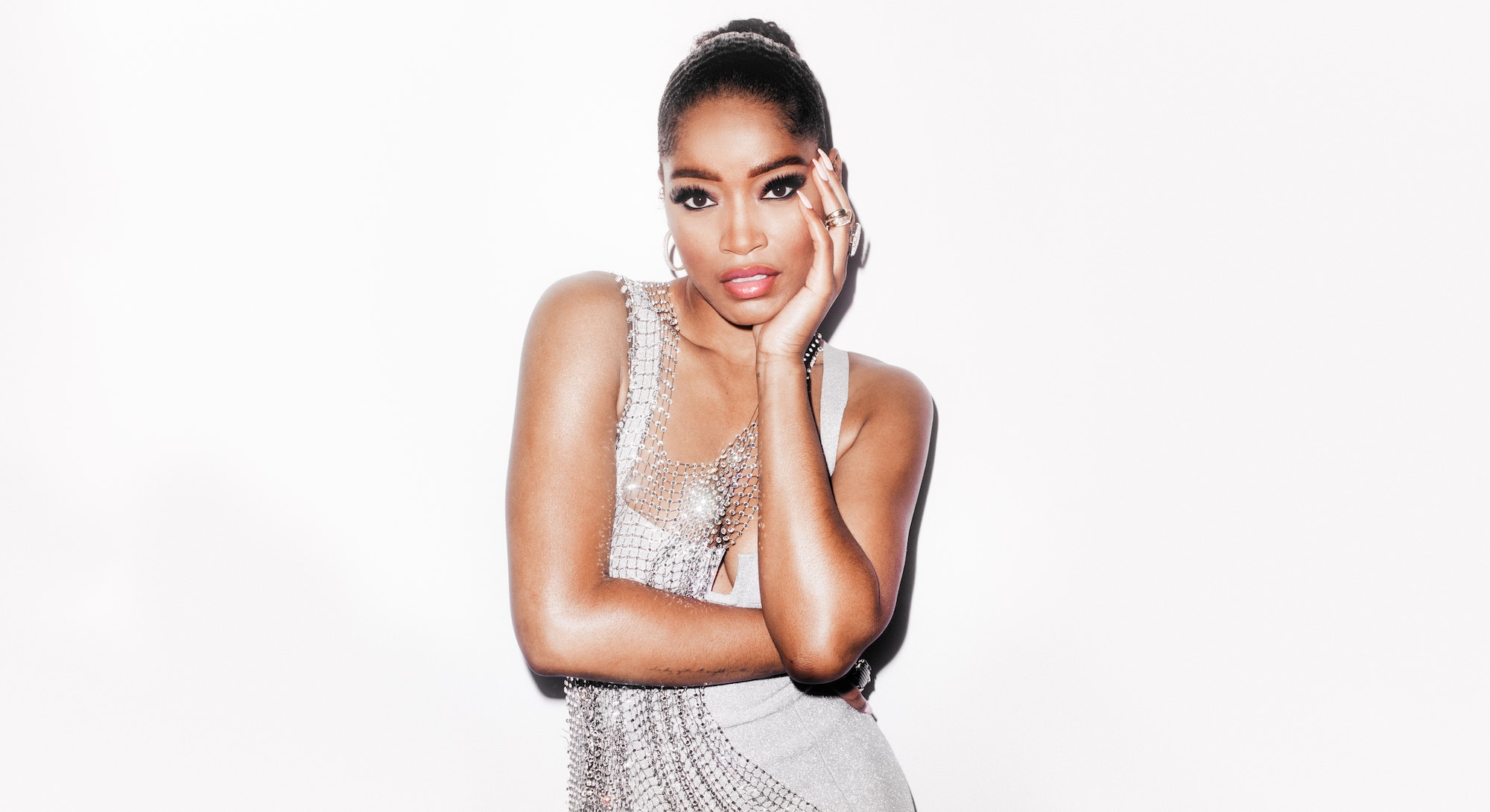 Keke Palmer is starring in a huge movie this fall, she recently released another single called "Twerk N Flirt," and two days before we meet in late August, she landed a gig hosting the third hour of the Good Morning America franchise, GMA3: Strahan, Sara, and Keke. There's a lot of newness in her life, and just when I think we've covered it all, she hits me with a curveball: "I'm getting ready to go to culinary school," she says, taking a sip of green tea. "That's something I really wanted to do in my 26th year."

Moments earlier, the actor-singer-host-chef and star of Hustlers (out Sept. 13) completed a photoshoot, striking pose after fierce pose in a Christian Cowan shimmering tank dress draped with strands of rhinestones. Now, the sparkles are covered by a black zip-up hoodie and her six-inch heels are promptly removed. After being in the entertainment industry for 15 years, she's a pro. And by her own definition — and pretty much anyone else's — Palmer is also a hustler.

"If you're trying to get from point A to point B and you're the kind of person who has a plan or has an idea of how you're going to get there and you're actively pursuing it, you're someone that I would consider a hustler," Palmer says, defining the title of her new film.

In her opinion, the characters in Hustlers fit her description, too. The film adaptation of the 2015 New York magazine article "The Hustlers at Scores" is about a group of former strippers who scam wealthy men out of large sums of money by drugging them, leading them to clubs, and running up their credit cards. Palmer plays Mercedes, a woman who gets involved primarily to make money to help get her fiancé out of jail. And, like the other women, played by Jennifer Lopez, Constance Wu, and Lili Reinhart, she also treats herself to expensive clothes and designer handbags.

But while the women in the film are hustling to get what they want, they're also working under another definition of hustling: straight up defrauding people, and doing so by spiking their drinks with MDMA and ketamine. The film puts a comedic spin on their scam at times; there are shopping montages and other displays of particular aughts excess. But these are not people to emulate; they're not heroes. In fact, the woman Mercedes is very loosely based on was sentenced to weekends in jail for four months and five years of probation in 2016 for her participation.

She keeps it real. She's loyal. She's a team player. She's daring. I think a lot of those things I can really relate to.

To get into her role, Palmer looked beyond the criminal parts of her character to the parts in which she could see herself. "[Mercedes is] really grounded. I feel like she always says what's on her mind. She keeps it real. She's loyal. She's a team player. She's daring. I think a lot of those things I can really relate to. And then just the fact that she has a sense of humor. That's me all day, every day no matter what is going on," she says.

Palmer also had to look at the actions of the characters without passing judgment, which allowed her to understand why they did what they did.

"They've experienced a lot, and they've experienced a lot with this specific type of group of people," she says of the four women and the rich Wall Street men they once performed for, but eventually hustle. In addition to the challenges each of them meet in their personal lives — being abandoned by parents, partners ending up in jail, single motherhood — the women also deal with men at the club who demean them and can be aggressive. The men have "dehumanized" the women, Palmer says, so when the women decide to turn them into targets, "You can see how the lines between what's morally right and morally wrong get blurred."

Though Palmer has so much going on in her career at all times, her outlook on hustling is based on following her heart first. Her choices — the ones that have brought her an accomplished career working alongside heroes like Queen Latifah in 2012's Joyful Noise and, now, Lopez — seem like they've been easy for her to make because of that.

It wasn't that I thought to myself, 'I want to be an entertainer or I want to act.'

But it wasn't always about making specific career decisions for the Chicago native, who found her breakout role when she was 12 years old in 2006's Akeelah and the Bee.

"For me, it was just that I liked to sing in church, and I just continued to follow that passion," Palmer explains. When she was a kid, her mom found her an audition for a local theater, because it allowed her to sing. That led her to acting. "It wasn't that I thought to myself, 'I want to be an entertainer or I want to act," Palmer continues. "I didn't know anything. All I knew was I liked to sing. I liked to bring joy to people. I liked to put myself out there. And that one little seed of passion of something I found to be enjoyable is what made me all of a sudden realize what I am: I'm an artist."

Once she knew that, she was able to put all of her effort behind her art. And when her dreams come true, Palmer is able to see them as both pinch-me moments and achievements she worked hard for and deserves. "I would hope that I would get to the point to work with all those people that I looked up to as a kid," Palmer says.

For Palmer, Jennifer Lopez was one of "those people".

"She's such a girls' girl. Very just cool, smart. Someone that when you watch [her in action], you're impressed by." And inspired by. Palmer says that the reason making Hustlers was so special was the respect she had for her co-stars. They motivated her to "do her thing," because they were all doing theirs.

Even though Palmer is working with dream-come-true co-stars, she's focused on keeping things down-to-earth for herself and for her fans. Palmer's Instagram — on which she shares behind-the-scenes looks at her career, makes herself into memes, and posts a series of hilarious videos about a character named Janet — has over 8 million followers and is a space for the star to have a "sense of ownership" over how she's perceived.

"It was very important to me to make sure that... I'm not going to be able to help being famous, but that my audience knew that fame didn't make me someone better than they were," she says. It's important to Palmer to use this platform to keep herself grounded, "to make sure that people don't put me on a pedestal," she explains. After all, she's human and despite having millions of people following her on social media, she wants the younger generation that's following her to see her and think, "'I can do exactly what she's doing,' as opposed to, 'This is far beyond my reach.'"

Palmer loves having her passions overlap. That's how she's gone from singing to acting to hosting to... culinary school, without leaving any of those interests behind. Even though that last part of the trajectory might seem unexpected to some, to her, it makes total sense.

"There's an umbrella of what we're all into, and I think it's important that we all try to taste a little bit," she says. "When I take time to do music, I have something ... to take back to acting. When I spend time on my acting, I have something to talk about when I'm expressing myself on a platform like GMA. And, hopefully, when I decide to go to culinary school that also inspires my other creative work."

If Palmer comes across like someone who can just go, go, go without ever getting overwhelmed, that's because she sort of can. At this point, slowing down feels unnatural to her. "If I'm not doing something, then I feel kind of like, 'Oh my gosh, what's going on?'" she says. With her plate so full, that shouldn't be an issue.