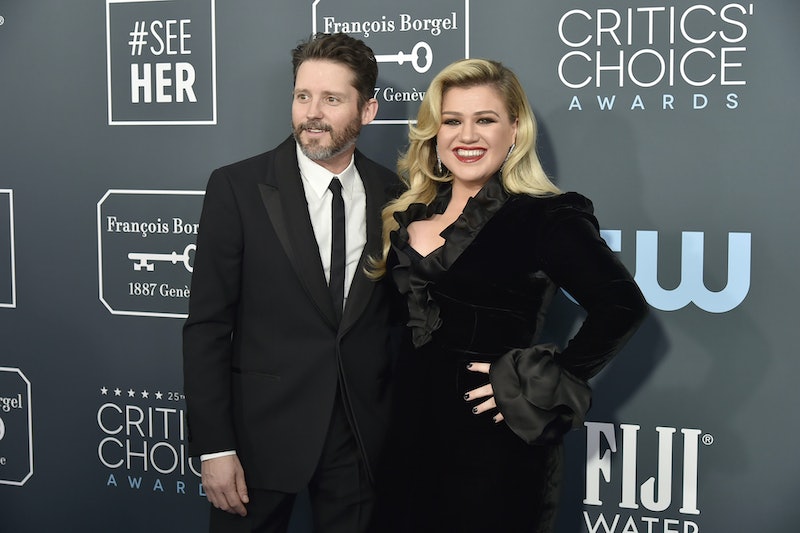 After nearly seven years of marriage, Kelly Clarkson has reportedly filed for divorce from Brandon Blackstock. According to documents obtained by The Blast, the singer-songwriter-talk show host quietly filed divorce papers in Los Angeles on Thursday, June 4. Bustle has reached out to representatives of Clarkson for comment, but did not receive an immediate response.

In the legal documents, Clarkson reportedly listed their date of separation as TBD, according to TMZ, requested joint custody of their children, and asked that their prenup be enforced. The couple has two children together, five-year-old daughter River Rose and four-year-old son Remington. Blackstock also has two older children from a previous relationship, Savannah and Sam, who Clarkson was a proud stepmom to.

The split comes as a shock to many, as Clarkson and Blackstock were just recently quarantining with their children at their Montana ranch, where she has also been remotely filming segments of her Emmy-nominated talk show The Kelly Clarkson Show amid the coronavirus pandemic. "Brandon and I love wide open spaces and coming to the ranch because both of us grew up in the country side, one," she said in a video tour of the ranch, called Vintage Valley. "We literally work almost seven days a week, if not seven days a week. So when we have time off, we really like to check out."

Clarkson married talent manager Blackstock in Blackberry Farms, Tennessee, near their former residence of Nashville, in October 2013. They initially met at the 2006 Academy of Country Music Awards, when Blackstock was working as the Rascal Flatts' tour manager. "We were just in a room together, and then he came up and said he was from the same hometown as me and I was like, 'Oh, we're so getting married'. I was so that girl," she told Ryan Seacrest in October 2012.

They were formally introduced to each other again in early 2012, at the behest of his father Narvel Blackstock, who was Clarkson's manager at the time, and were engaged within ten months of dating. "I'M ENGAGED!!!!," she wrote on Twitter that December. "I wanted y'all to know!!! Happiest night of my life last night! I am so lucky and am with the greatest man ever." Neither Clarkson nor Blackstock have publicly commented on the news as of yet.

More like this
Watch Kelly Clarkson Sing A Taylor Swift Breakup Song About A Toxic Relationship
By Alyssa Lapid
Meghan Trainor & Daryl Sabara Are Expecting Their Second Baby
By Jake Viswanath
Adam Levine & Behati Prinsloo Welcome Their Third Child Together
By Jake Viswanath
Hilary Duff's Husband Matthew Koma Has Her Name Tattooed On His Butt
By Jake Viswanath and Stephanie Downs
Get Even More From Bustle — Sign Up For The Newsletter
From hair trends to relationship advice, our daily newsletter has everything you need to sound like a person who’s on TikTok, even if you aren’t.