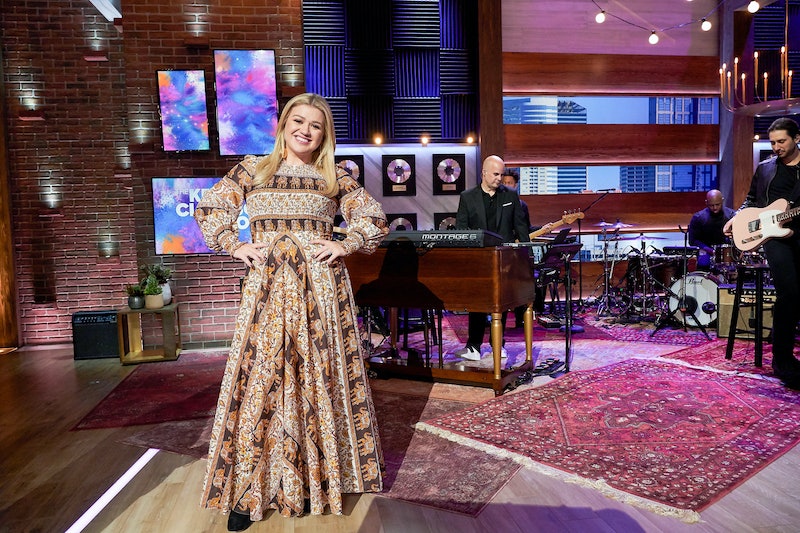 It's truly a beautiful day in the neighborhood anytime Kelly Clarkson busts out her impressive vocals; though this week she's already exceeding everyone's expectations. Clarkson performed a cover of Mister Rogers' "Won't You Be My Neighbor?" during a segment of her Dec. 3 episode of The Kelly Clarkson Show. The popular tune served as the theme song from Mister Rogers' Neighborhood for the 31 seasons the show was on the air.

The lyrics are known and loved by all, which makes altering it in any way a risky undertaking. But this is Clarkson we're talking about. She rose to occasion and delivered a reimagined version of the song that's guaranteed to hit you right in the feels. As if that alone wasn't enough, a shadow figure of Mr. Rogers is shown dancing behind a screen as Clarkson performs, adding yet another layer of nostalgia to an already emotionally-charged moment.

But, of course, this rendition isn't just coming out of nowhere. The cover was a nod to her guest Tom Hanks, who is playing Fred Rogers in his latest film, A Beautiful Day in the Neighborhood. During his appearance, Hanks revealed that it took 27 takes of Mister Rogers' famous opening number to "Won't you Be My Neighbor?" until he got it just right for the film. "It was nearly impossible," he told Clarkson.

Performing on her show isn't a new concept for Clarkson. The Voice coach regularly covers various artists at the opening of each episode, which is referred to as her Kellyoke segment. From Whitney Houston and Cher to One Direction and Lizzo, the American Idol winner has flawlessly covered them all. According to Clarkson's music director, Jason Halbert, who spoke with Vulture back in November, the concept of Kellyoke stems from a tradition of what she does while on tour. As fans know, Clarkson had made it a habit of performing a fan requested cover when on tour. "I brought her the idea of, ‘Why don't we do a fan request every day?'" Halbert recounted. "She loved the idea, and I think we've been doing it since almost the very beginning"

Given Clarkson's musical talents, it shouldn't come as a surprise that she can belt out classic hit songs and make them her own without comprising the integrity of the original, but watching her in action never gets old. And since The Kelly Clarkson Show has already been picked up for a second season, she'll be able to continue wowing fans for the foreseeable future.

More like this
Britney Spears Shares & Deletes Photos Of Justin Timberlake From 22 Years Ago
By Jake Viswanath
Man Meets Politics: ‘Boy Meets World’ Star Ben Savage Is Running For Congress
By Jake Viswanath
Hilary Duff's Husband Matthew Koma Has Her Name Tattooed On His Butt
By Jake Viswanath and Stephanie Downs
The Jonas Brothers' New Album Has A Very Meta Name
By Alyssa Lapid
Get Even More From Bustle — Sign Up For The Newsletter
From hair trends to relationship advice, our daily newsletter has everything you need to sound like a person who’s on TikTok, even if you aren’t.