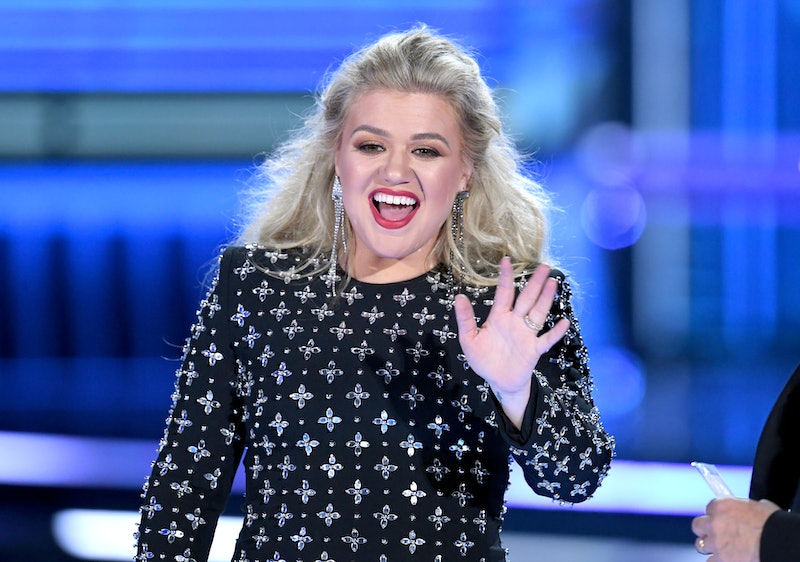 There's probably no one quite as excited for the premiere of The Kelly Clarkson Show as Kelly Clarkson herself. The singer is set to premiere her first talk show this September on NBC, and she's making sure that everyone knows just how enthusiastic she is about her unexpected new job. Kelly Clarkson gave a peek at her new talk show set to her fans, and just like she said in the video, it truly feels like home already.

On Wednesday, Aug. 12, Clarkson posted a video to the talk show's official Instagram account where she proudly shows off her brand new studio, hilariously admitting that she's making the video for fans even though absolutely no one told her to.

She first shows off the set's "band space", where her in-house band will be set up, raving "look how cool it is!" The space is complete with faux scenic windows and a ton of platinum records on the walls, presumably representing all of her many hits. "What up?," she yells happily to her crew. "Nobody asked me to do this, I'm just excited," she added, making her band erupt in laughter. "Like not one person asked me to do this."

She then panned the camera to show off the audience area, including cool spaces built into the stage where fans can sit up close to the host. “Look at it! Don’t you want to come here?” she asked viewers. “Doesn’t this feel like home?” The only appropriate answer to both questions is a resounding "yes."

Finally, she gave fans a glimpse at the stage itself, pointing to a lit-up neon purple Kelly Clarkson Show sign. "Look at it! It’s The Kelly Clarkson Show! I have a show,” she exclaimed. "They ran out of everyone [else] to ask. It's fine." She ended the video with a final look at the set, including the colorful entrance and guitars hanging on the wall, and some necessary self-encouragement. "It's really exciting, I have a show! Hope I don't suck."

If the show lives up to Clarkson's promises, there is no way that it will suck. The new host appeared on another talk show, The Tonight Show With Jimmy Fallon, back in September 2018 to announce her big endeavor and spill all of the details. The Kelly Clarkson Show will air right before The Ellen DeGeneres Show on weekdays, and true to the host's roots, it will have many musical elements. Clarkson even told Jimmy Fallon that she got guests to do music skits with her during the pilot. “It’s very musical, as well,” she said. “It would be weird it wasn’t! But if you don’t like music you probably shouldn’t watch.”

Despite her obvious excitement, she admitted that she's going to have a tough time with one aspect of the job. “I love talking — it’s my favorite pastime,” she told Fallon. "It’s hard for me to shut up, though. You have to listen to people who come on your show, and I just keep talking! The only thing I’ve gotta work on is listening.” It's a good thing that hearing Clarkson talk is an absolute delight, then.

More like this
Lizzo Proved She’s Team Jeremiah During Her ‘The Summer I Turned Pretty’ Review
By Grace Wehniainen
Sadie Sink Would Escape Vecna From 'Stranger Things' With This Taylor Swift Song
By Grace Wehniainen
Kate Bush Reacts To “Mad” Revival Following 'Stranger Things' Cameo
By Sam Ramsden
What Is Ariana Grande's Net Worth? When It Comes To Money, She Has No “Problem”
By Hugh McIntyre
Get Even More From Bustle — Sign Up For The Newsletter