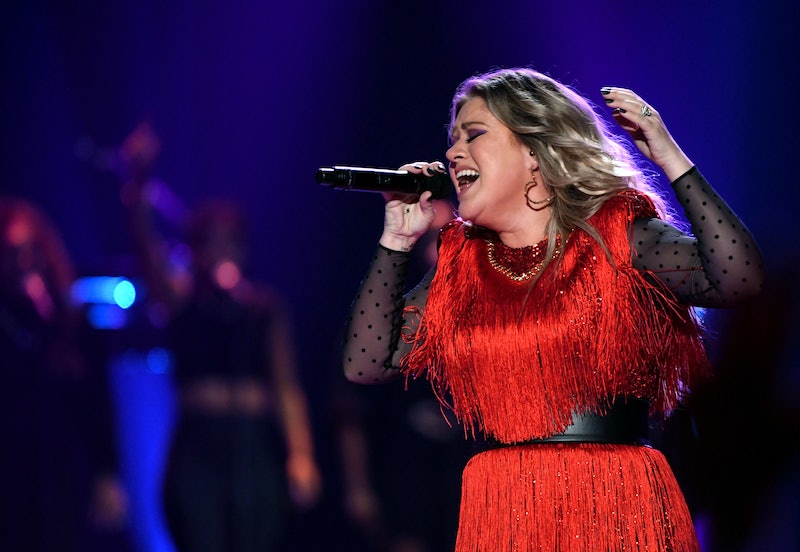 Two musical icons, two different and amazing versions of a hit, Oscar-nominated song. What more could one ask for? As Entertainment Weekly noted, Kelly Clarkson covered Bradley Cooper and Lady Gaga's "Shallow," and it's sure to be a delight for every Star is Born fan out there.

On Feb. 15, during the Green Bay, Wisconsin stop for her The Meaning of Life tour, she announced that she was going to switch things up by covering the popular song, originally sung by Cooper and Gaga in the Oscar-nominated film, A Star is Born. Luckily, for everyone who couldn't witness the fun moment in person, Clarkson uploaded her "Shallow" cover as part of her A Minute and a Glass of Wine segment on Facebook.

“This song, I love it… I thought she and Bradley Cooper did an awesome job,” she announced to the crowd, “We’re gonna do our version of it ’cause obviously, I don’t have a Bradley Cooper here. So I’m just holding it down.” She also added, "I hope I don't suck. And if I do, I hope she doesn't see it." Of course, since this is Clarkson, after all, her cover absolutely did not disappoint. And based on the crowd's reception to her version of "Shallow," it's clear that they were living for it, too.

Clarkson also had some incredibly sweet things to say about Gaga during her recent tour stop. As she recounted to her audience, the "Million Reasons" singer is truly a class act. She said:

“We’re really different but we’re really similar in the fact that she loves music and that’s why she’s doing what she’s doing. Honestly, I remember her first single, we actually did a show together combined for some event and she is one of the only artists that has ever [sent] me a hand-written letter saying, ‘Thank you so much, it was an honor to open for you.’ She’s the nicest lady ever.”

It's apparent that Clarkson and Gaga go way back, seeing as though they do have a history together. In addition to the "Behind These Hazel Eyes" songstress' recent comments, the two women previously had a fun interaction on social media way back in 2014. As ABC News noted, Clarkson posted a photo of her daughter River Rose in September 2014 with the little one showing off her Gaga-inspired outfit. She wrote, "Watch out Lady Gaga!! River Rose is on the scene!!"

Gaga replied to Clarkson's post with nothing but love and a little bit of humor. She responded with:

"oh my miss River Rose is given' me a run for my money!! Look at those shoulders, like Grace Jones! Can I borrow that bib?"

While Clarkson and Gaga have not yet blessed the world with some kind of musical collaboration (which needs to happen ASAP, by the way), the singers clearly have nothing but love for one another. Given this recent cover of "Shallow," maybe the two could join forces on another, new take on the track? I don't think any fan of A Star is Born would be averse to that level of musical superstardom.