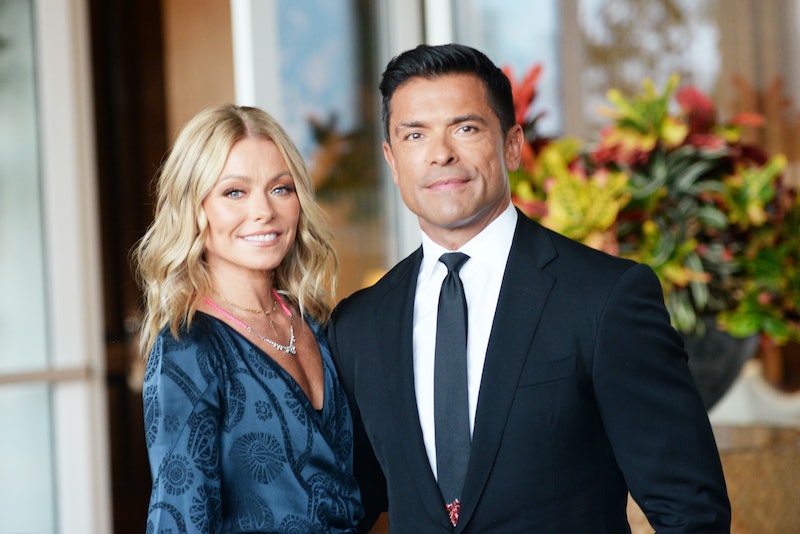 Riverdale is known for having some pretty hot and steamy hook ups, but an upcoming character is about to take that concept to a whole new level. Kelly Ripa is joining Riverdale and she quite honestly couldn't be more qualified for the role, given that she's had almost 23 years of experience in the matter. Ripa, who is married to Riverdale star Mark Consuelos, who plays Veronica's father Hiram Lodge, has been cast to play his character's alleged mistress.

Ripa announced the exciting news via Instagram on Tuesday night and from the sound of things, she couldn't be more thrilled to be diving headfirst into all the Riverdale drama. “It’s a family affair," the talk show host wrote in the caption. "Hiram’s mistress. 23 years of auditioning for a role I was born to play. Coming soon to the @thecwriverdale.”

The photo itself pictured Ripa looking as stunning as ever in a film noir-type setting while wearing a gorgeous dress and holding a silver-tipped cane. Could this be part of her wardrobe for the show or something she just happened to have lying around the house. Eager fans will just have to wait and see, but one thing's for sure — this will definitely be one episode of Riverdale you aren't going to want to miss.

As for how she'll fit into the story, according to Us Weekly's description of Ripa's character, she'll be portraying the part of the confident Mrs. Mulwray, “a beautiful, icy femme fatale who gets caught up in a conspiracy that’s much bigger than she initially realized.” Perhaps this will lead to a run-in with Hiram's wife and current Riverdale mayor Hermione Lodge. Now that would be a showdown worth seeing.

At this point in time, there's a limited amount of information about Ripa's guest-starring stint on Riverdale, so it's hard to say when exactly she'll show up and for how long, but given the caption of her Instagram post, which includes the words "coming soon," it may be safe to say that she'll be popping up to make her grand debut in the very near future. But something tells me she and Consuelos are going to have great chemistry together on-screen and that their attraction for one another should be pretty convincing.

Granted this won't be the first time the dynamic duo have ever shared screen time together. In fact, the two of them originally met while working on the set of the popular daytime soap opera All My Children.

However, Ripa and Consuelos won't be the only members of their family making their mark on Riverdale this season. During this week's episode, titled “The Midnight Club," their son Michael will be portraying a young version of Hiram Lodge in a highly anticipated flashback sequence. And as you can probably imagine, the resemblance is simply uncanny.

Unfortunately, that means Michael won't be sharing any scenes with either of his parents, but it still had to make for some fun times on set. Thus far, Hiram has proven time and again that he answers to nothing and no one. Perhaps Mrs. Mulwray will end up becoming his one weakness. Only time will tell.