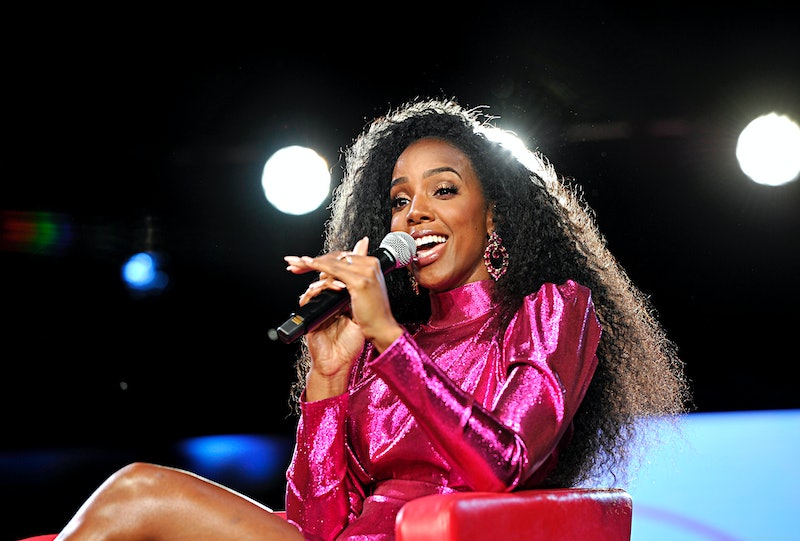 It may only be the middle of August, but Christmas will be here quicker than you think, meaning that it's almost time for cozy Ugg boots, throwback holiday movies, gingerbread lattes, and Kelly Rowland. Yes, you heard that right. This season, the former Destiny's Child member will be a very important part of your holiday celebrations. Kelly Rowland is starring in a Lifetime Christmas movie, and it's based off of a holiday disaster that actually happened to the singer, which means fans are in for a wacky ride.

Rowland will star in Merry Liddle Christmas, playing the lead role of Jacquie, a successful single tech entrepreneur who recently bought a new home and decides to host her family for Christmas, as reported by Entertainment Weekly. But as with most loving families, hers is a little dysfunctional, meaning the holidays are about to go a little haywire. Stars, they're just like us!

Of course, no good Christmas movie is complete without some sort of holiday love story, and Merry Liddle Christmas is no exception. The plot also involves Jacquie having a really good shot at romance with her new neighbor, even though she'd be breaking one of her dating rules by embarking on it, and "a glossy video shoot of the perfect Christmas." We're not sure what that means, but hopefully it entails a musical number from Rowland, just for the fun of it. The people deserve a sequel to her cover of "Wonderful Christmastime".

The film is based off Rowland's “own recent Christmas catastrophe,” according to Lifetime, and while it's currently unknown what that disaster exactly was, it does mean fans can expect something wild to go down. Rowland and her husband Tim Weatherspoon will serve as executive producers on the project.

Although this is Rowland's first foray into holiday movies, the singer has done a lot of acting work lately, appearing on shows like American Soul, L.A.'s Finest, and A Black Lady Sketch Show in the past year. She's even appeared on Lifetime before, starring in the highly underrated TV movie Love by the 10th Date, so it's no surprise that a Christmas movie is next on her list.

And of course, she's already an expert at spreading holiday cheer. Remember when Destiny's Child released a Christmas album in 2001? If not, you're in for a treat. Rowland, Beyoncé, and Michelle Williams provided fans with beautiful covers of Christmas classics, including a jaw-dropping harmonious medley, as well as timeless original songs that can truly be listened to year-round without judgment.

Of course, Rowland's film isn't the only future holiday classic viewers can expect from Lifetime this season. The network is planning to release 28 new original films during their "It's A Wonderful Lifetime" series from Oct. 18 to Dec. 25. Other offerings will include Christmas movies starring Melissa Joan Hart, Tia Mowry-Hardict, and Marie Osmond, meaning your Christmas schedule is about to get very filled up before Halloween even comes around.

Merry Liddle Christmas will premiere sometime this year on Lifetime, and although no date has been announced, it's probably the only thing on fans' Christmas lists. Well, other than a Destiny's Child reunion.