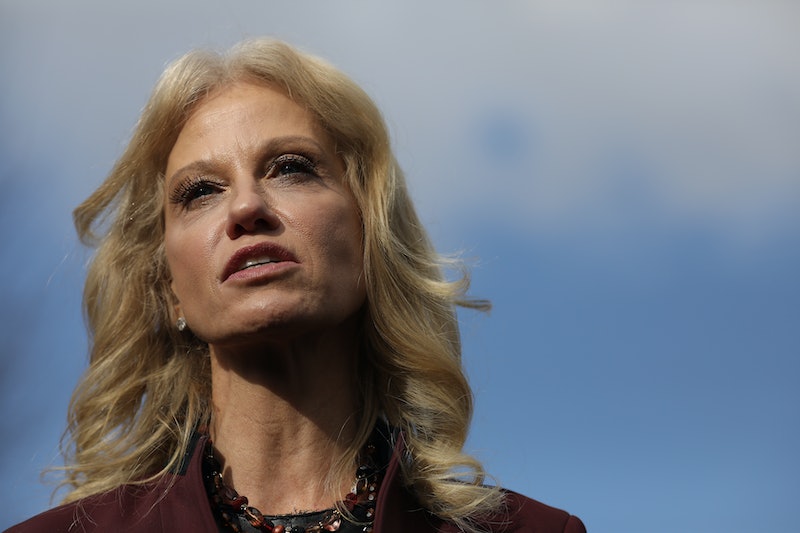 Many Trump administration officials have been verbally confronted by their critics in public places, but a counselor to the president has now alleged that one incident went beyond words. In an excerpt from a CNN interview published Friday, Kellyanne Conway claimed a woman assaulted her last October while she was at a Mexican restaurant outside of Washington D.C.

"I was standing next to my daughter and many of her friends at dinner," Conway told CNN. "Somebody was grabbing me from behind, grabbing my arms, and was shaking me, to the point where I thought maybe somebody was hugging me." She explained that she turned around to see a woman whose "whole face was terror and anger."

"She ought to pay for that," Conway said of the woman.

Although the alleged assault occurred in October, this is the first time that it has become public. The New York Times' Maggie Haberman tweeted Friday that it's "unusual" that the incident didn't leak to the public. The Trump administration has notoriously had trouble keeping information from leaking to journalists.

Conway told CNN that she called the police, who later charged Mary Elizabeth Inabinett with disorderly conduct and second-degree assault. Inabinett's attorney, however, insists that she did nothing wrong.

"Ms. Inabinett saw Kellyanne Conway, a public figure, in a public place, and exercised her First Amendment right to express her personal opinions," her attorney, William Alden McDaniel Jr., says in a statement to Bustle. "She did not assault Ms. Conway."

Inabinett is scheduled to go on trial in March in a court in Maryland. Her lawyer says she will plead not guilty. "The facts at trial will ... show Ms. Conway's account to be false," McDaniel says in the statement. Conway says that her daughter managed to capture some of the incident on video, but according to CNN, it's not clear whether the video shows Inabinett making physical contact with Conway.

Conway said in the interview that Inabinett "was out of control." Per CNN, court documents claim that she shook Conway for a few seconds. Inabinett allegedly then broke physical contact but continued to yell "comments believed to be about Conway's political views." After nearly 10 minutes, restaurant workers escorted Inabinett out, the documents say.

The incident occurred around the time of Brett Kavanaugh's Supreme Court confirmation process. At the time, Conway expressed doubt about the sexual assault accusations against him. After three women came forward with allegations (all of which Kavanaugh denied), Conway told CBS that the events were "starting to feel like a vast left-wing conspiracy."

Conway is far from the first Trump administration official to be publicly rebuked by private citizens. In June, White House Press Secretary Sarah Huckabee Sanders was asked to leave Virginia's Red Hen restaurant by an owner who was critical of the president. Protesters also confronted Homeland Security Secretary Kirstjen Nielsen at a Mexican restaurant that month. When incoming Vice President Mike Pence attended the musical Hamilton in the fall of 2016, an actor addressed him after the curtain call: "We are the diverse Americans who are alarmed and anxious that your new administration will not protect us."

But Conway argues that Inabinett's protest went beyond a verbal demonstration of dissent. The court will decide on a verdict when her case comes to trial in March.