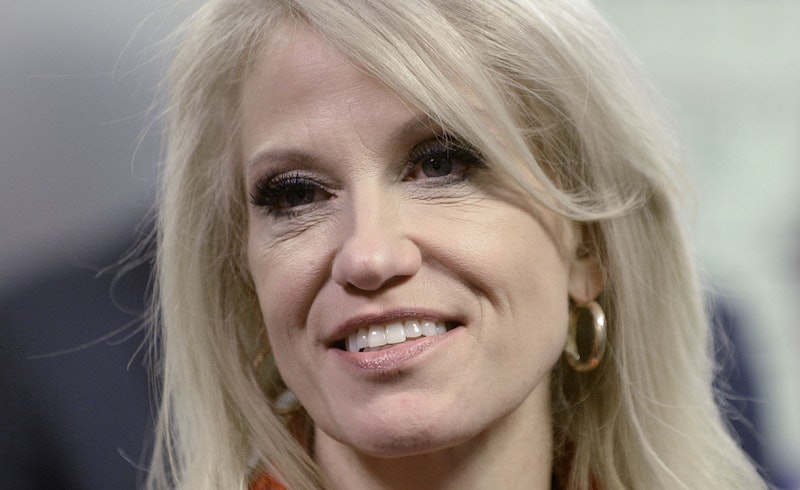 On Sunday, Kellyanne Conway expanded wiretapping allegations against former president Barack Obama in an interview with Bergen Record columnist Mike Kelly. "What I can say," she told Kelly, "is that there are many ways to surveil each other now, unfortunately." However, in an interview with CNN host Chris Cuomo on Monday, Conway denied that she suggested wiretapping claims against Obama, and said that her comments — including "microwaves that turn into cameras" — were taken out of context. But just like Trump's allegations of surveillance, so too were Conway's surveillance claims made without evidence.

In response to Kelly's question on whether Trump Tower had been wiretapped by Obama, Conway went on to say, "There was an article this week about how you can surveil someone through their phone, certainly through their television sets, any number of different ways. Microwaves that turn into cameras. So we know that that is just a fact of modern life."

Making such egregious claims is fraught with several disconcerting problems. Firstly, it is unethical, since speculation about Obama wiretapping Trump is nothing but that — speculation. There's a lack of empirical evidence, the fundamental component needed for a claim to be authentic.

Secondly, these are statements emanating from an administration that has lampooned a list of media outlets by calling them "fake news." There is a moral and ethical inconsistency in criticizing news for being "fake" while simultaneously issuing unverified statements. And what's even more ironic is that soon as headlines were made about Conway's microwave spying remark, she criticized them and called them "fake news" and described them as the reason "why people don't trust what they read." To put it simply, Conway is calling reports of her very own quotes "fake news."

And lastly, an allegation of such magnitude leveraged by a president against a predecessor is no trivial matter. As Sen. John McCain said, Trump should either prove or retract his claim.

In the CNN interview, when Cuomo pressed on Conway's comments regarding wiretapping, Conway said that she "was answering a question about surveillance techniques generally. I was reflecting what people saw in the news last week, which were several articles about how we can surveil each other generally." Cuomo responded, "You may have responded generally but you were asked specifically [about the alleged surveillance of Trump]."

To investigate, the House Intelligence Committee set a deadline for the Department of Justice to present wiretapping evidence, according to CNN. That deadline asks that the Department of Justice provide documents related to Trump's accusation that the Obama administration wiretapped communications at Trump Tower prior to the election. A spokesman for former president Obama has denied the allegations.

After criticism of her spying comments picked up pace in various media outlets, Conway retweeted Trump's Monday morning tweet that criticized "the media." "It is amazing how rude much of the media is to my very hard working representatives. Be nice, you will do much better," Trump tweeted.

If the media quoting Conway's statements about "microwaves that turn into cameras" verbatim is the media not being nice, the senior advisor to Trump is in for a rude surprise.