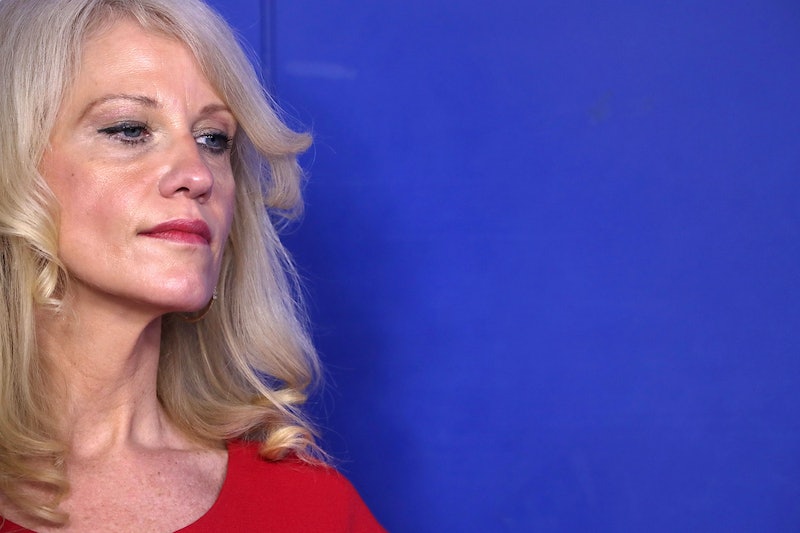 President Trump has made it clear he's no fan of leakers, as evidenced by his tweets lashing out against them. Well, it looks like none other than his former campaign manager and current adviser Kellyanne Conway might be a White House leaker herself, according to POLITICO Playbook.

According to the report, Conway was observed holding an off-the-record conversation with numerous reporters during a Thursday night event at the British Embassy. She reportedly made fun of several of her coworkers, including Chief of Staff Reince Priebus, and shared details about instructions she'd been given by the president on former FBI director James Comey.

White House Press Secretary Sean Spicer told POLITICO that Conway denied the account. He said she was mocking the press rather than Priebus, and that she did not go against President Trump's instructions on how to answer questions regarding the existence of tapes of his conversations with Comey.

The anonymous observer who brought these claims to the public created the Twitter account @KellyanneLeaks through which they published quotes of specific comments made by Conway accompanied by photos of her at the event; POLITICO Playbook reported that two other sources confirmed the claims posted on the account.

"She held court for an hour or so as folks cycled in/out of her circle," one of tweets begins. "She said Trump gave her a line to talk about 'the tapes' to press." Then, it continues, "She said Trump told her to say 'Jim Comey will have to wait and see about the tapes'; she added 'I chose to convert that to 'no comment'...and laughed.'"

Conway also allegedly mocked Priebus' pleas to put a stop to leaks. Another tweet reads: "'No leaks guuuys' she said, mimicking him in a dopey voice." It adds, "He should just be honest: 'I'm upset because there's someone working on a story who pronounces it RAYNSE instead of REINCE.'" Spicer pushed back against it, saying Conway was mocking the press for "how wrong they’ve been," not Priebus.

The person running the Twitter account also sent a pointed message to the president by quoting one of his tweets calling Comey a leaker, writing, "Trump/Pence people are a bit sloppy and fratricidal; what else is new. But if 45 wonders who the leakers are..."

Though an off-the-record conversation is technically different from leaking information to the press as an anonymous source, Conway's alleged remarks about the inner workings of the White House could land her in the bad books of a president who has lambasted reported anecdotes suggesting inner turmoil among his staff — he did so during the campaign and shortly after winning the election.

Whether the tweets hold truth, it will be interesting to see how a president who seems allergic to suggestions of drama within his administration will react.