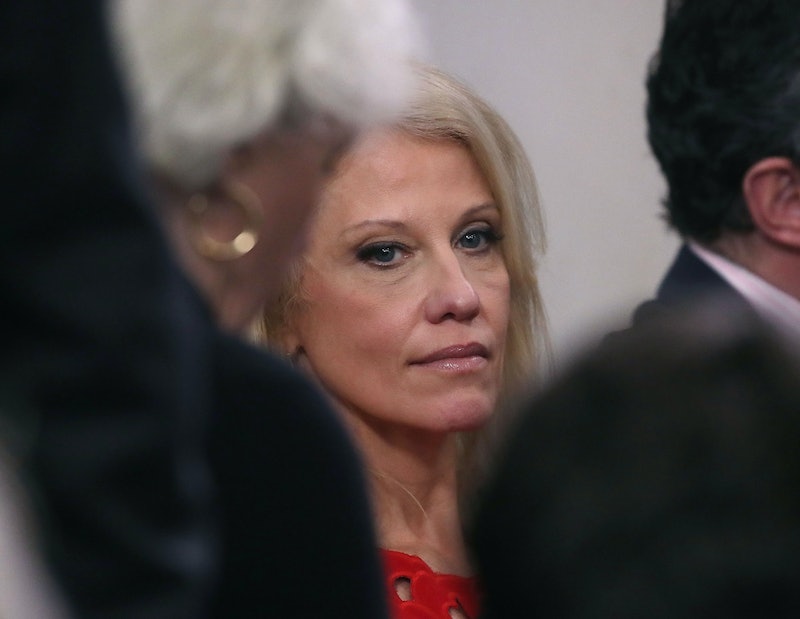 In a testy back-and-forth with CNN reporter Abby Phillip, White House counselor Kellyanne Conway insisted that President Donald Trump's border wall should not be referred to as a "wall." CNN's chief White House correspondent Jim Acosta tweeted a transcript of the conversation, which he noted took place between Conway and Phillip, his colleague.

Per Acosta's transcript, Phillip initially pointed to a CBS poll concerning the ongoing government shutdown, which began at midnight on Dec. 22, 2018 and is longest shutdown in American history yet. The government partially freezing over is the result of Trump's insistence on $5.7 billion in a spending bill for a U.S.-Mexico border wall, a demand that Democrats have refused to entertain.

In her conversation with Conway, Phillip brought up the poll's question about whether the border wall was worth the government shutdown. (The majority of CBS poll participants, at 71 percent, said no.) Conway first took issue with the question itself, then railed against Phillip's use of the word "wall."

"I'm asking why you and the polling questions respectfully are still saying 'wall' when the president said you can call it whatever you want," Conway said.

Phillip noted that, in fact, the president himself frequently used the word "wall" while discussing the idea. And she had a point: On Wednesday alone, Trump specifically referred to the "wall" three times. At one point, the president tweeted, "BUILD A WALL AND CRIME WILL FALL! This is the new theme, for two years until the Wall is finished (under construction now), of the Republican Party. Use it and pray!"

Given Trump's new wall slogan, Phillip asked Conway why couldn't the structure be referred to as just that. That's when Conway said, "He calls it a wall, a steel slat barrier, physical barrier, anything. In other words, we need a physical barrier that you can't crawl under, climb over, drive through, or walk around."

Conway then proceeded to talk about how she had doors in her own house, and those doors had locks for security. "I assume you do also," she said to Philip, "and they actually have locks on them."

"In other words, to protect the people on the inside," Conway added, comparing Trump's border wall to doors in a home. "So I don't understand why it's so difficult to get beyond what you all, most of you want to make a four-letter word, 'wall,' when the president said to Chuck Schumer very specifically and the president has said many times since publicly — call it what you want to call it but let's secure our border."

It's unclear why Conway took issue with a reporter calling Trump's wall a wall, especially since he continues to refer to it as such. Since he first announced his run for presidency in June 2015, Trump has been vocal about building a "wall" between the United States and Mexico.

In fact, under his presidential campaign website, Trump had a step-by-step document titled "Pay for the Wall," in which he claimed Mexico would foot the bill for construction. Some people may just think Conway, who came up with "alternative facts" in 2017, is just looking for an alternative description.