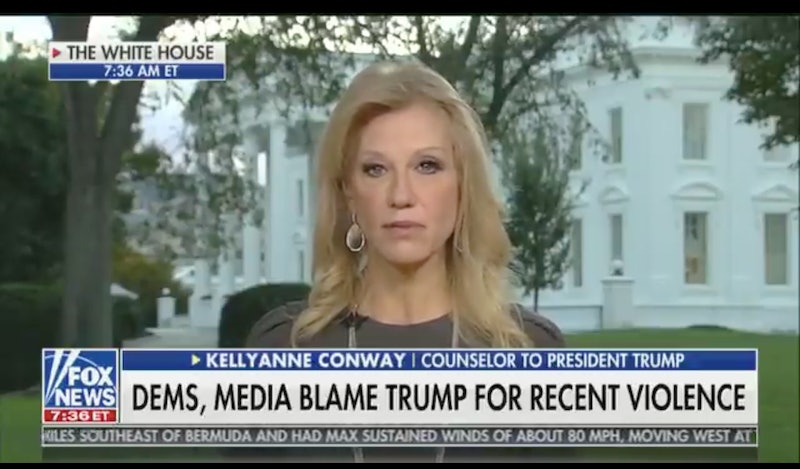 On Saturday, a shooting at the Tree of Life Synagogue in Pittsburgh claimed the lives of 11 people. During an interview on Monday, Kellyanne Conway responded to the Pittsburgh synagogue shooting by suggesting that late night hosts are contributing to an "anti-religiosity" sentiment in the United States. Conway's claims were quite controversial, with many on social media pushing back against her assertions.

As Business Insider reported, Conway made these comments while discussing the Tree of Life shooting on Fox and Friends on Monday. After listening to brief biographies of some of the victims of the shooting, Conway told the hosts:

The anti-religiosity in this country that is somehow in vogue and funny, to make fun of anybody of faith, to constantly be making fun of people who express religion. The late-night comedians, the unfunny people on TV shows. It’s always anti-religious.

The White House adviser also noted that she believes that people should rely on religious faith in order to overcome crisis and divisiveness. "And remember, these people were gunned down in their place of worship, as were the people in South Carolina several years ago, and they were there because they’re people of faith," she said. "And it’s that faith that needs to bring us together. This is no time to be driving God out of the public square, no time to be making fun of people."

Some on social media, including The Daily Show, a late night show hosted by Trevor Noah on Comedy Central, took Conway to task for her remarks. Making reference to Conway's Fox and Friends interview, the show tweeted, "Hey @KellyannePolls, if late night shows are so anti-religious, why did God create TEN THOUSAND of them?"

Others condemned Conway for generalizing the possible reasons behind the shooting. Shamus Khan, the chair of the Department of Sociology at Columbia University, didn't hold back when tweeting about Conway's comments, writing:

F**k Conway for erasing the anti-semitism behind the Pittsburgh attacks, suggesting some kind of generic "anti-religiosity." Reminder: most white nationalists identify strongly as Christians. This wasn't anti-religious. It was anti-semitic. Full stop.

Frederica Wilson, a U.S. House representative from Florida, echoed similar sentiments. "I should be shocked by this assertion, AKA #AlternativeFact. Sadly, I'm not. @KellyannePolls: What happened in Pittsburgh last weekend was clearly anti-SEMITISM not 'anti-religiosity,'" she wrote.

During her interview, Conway also praised President Trump's response to the Tree of Life shooting — and specifically commented on his use of the term "anti-Semitism." As the White House adviser described:

He denounced anti-Semitism in all forms. He said we must rise above this evil. He’s called for the death penalty for this murderer in Pittsburgh, who gunned down 11 innocent people because of their faith, and he said the word "anti-Semitism," "anti-Semite" any number of times.

Conway also appeared to address criticisms about her comments on Fox News in a tweet on Monday. Conway posted a photograph of what appeared to be quotes from her interview and accompanied it with the caption, "We need truth & focus. As I’ve said repeatedly on TV & Twitter for days, the lesson from Pittsburgh is the scourge of anti-semitism and the killing of 11 Jews BECAUSE they were Jews."

Overall, it's clear that Conway's Fox and Friends interview struck a nerve with some. The White House adviser has appeared to push back against these criticisms, though many on social media continue to find her "anti-religiosity" remark problematic.