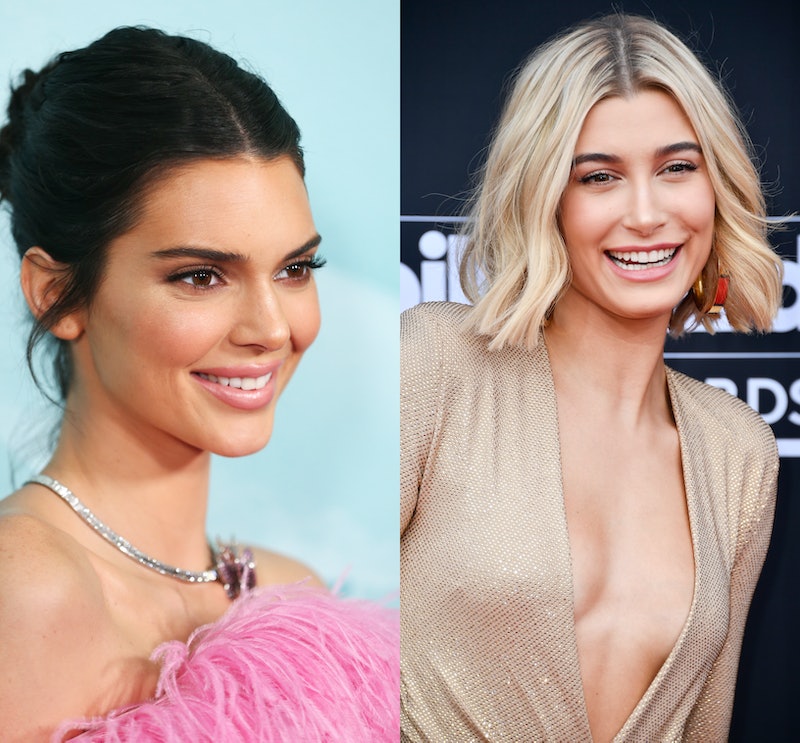 It's the music festival FOMO time of year. On Saturday, April 20, Kendall Jenner shared photos with Hailey Baldwin at Coachella on Instagram, and the snaps show these two are still best friend goals. The post included pictures of Jenner and Baldwin living it up at the festival with friends. The two stars were spotted wandering the festival grounds hand in hand and stopping by Kacey Musgraves' performance, according to People. On Instagram, Jenner and Baldwin posed together backstage, enjoying a drink and sticking out their tongues, and the two also snapped a picture in the crowd during Jaden Smith's set. Of course, both models chose fashionable looks for the weekend, with Jenner wearing a white crushed velvet top while Baldwin wore a satin tube top.

Jenner's love for Coachella is well-documented. The music festival, takes place over two weekends in Indio, California, and Jenner was spotted both weekends, according to E! News. If the photos are any indication, the chance to spend quality time with her bestie Baldwin was a highlight. The model even captioned her post, "glow in the dark friends." The photo-set caught the attention of friends and fans who left plenty of supportive messages in the comments. Justin Bieber, who is married to Baldwin, commented: "Baes boobs" with two fire emojis.

The friendship themed photo-set wasn't the only Coachella update from Jenner and Baldwin. On Saturday, Jenner shared an outfit update on Instagram as well, showing fans her laid-back look from the first weekend of the festival. She posted another assortment of photos from over the weekend, this time without a caption. Jenner also shared pictures with model and DJ Fai Khadra, which sparked romance rumors, per Life & Style.

In February, Jenner explained the need for privacy in a radio interview with Baldwin, according to ET Online. "I don't want to let the world have their opinion on something and let them fully into something if I don't even know what's gonna end up happening in the next couple months because it's something I'm going to have to explain," she said. "I'm in relationships for myself, for me and that other person, not for anybody else, so I don't find the need to be flexing it like that."

If Jenner does have a relationship update, she likely told Baldwin all about it during their Coachella hangout. The two stars are longtime besties, and first got to know each other because of Baldwin's friendship with Kylie Jenner. Kendall and Baldwin bonded during New York Fashion Week, and have been close ever since, according to People. The two still spend plenty of time together — in December 2018, Jenner and Baldwin appeared on Carpool Karaoke for Apple TV. And they even have matching friendship tattoos on their fingers, according to Glamour.

Baldwin and Jenner's trip to Coachella shows these two remain besties, even amid major life changes. Their weekend music festival hang looked like so much fun, though it's not clear if Jenner will be attending the final day of Coachella. Even if she doesn't, fans can still look forward to more social media updates from these two longtime pals in the future.