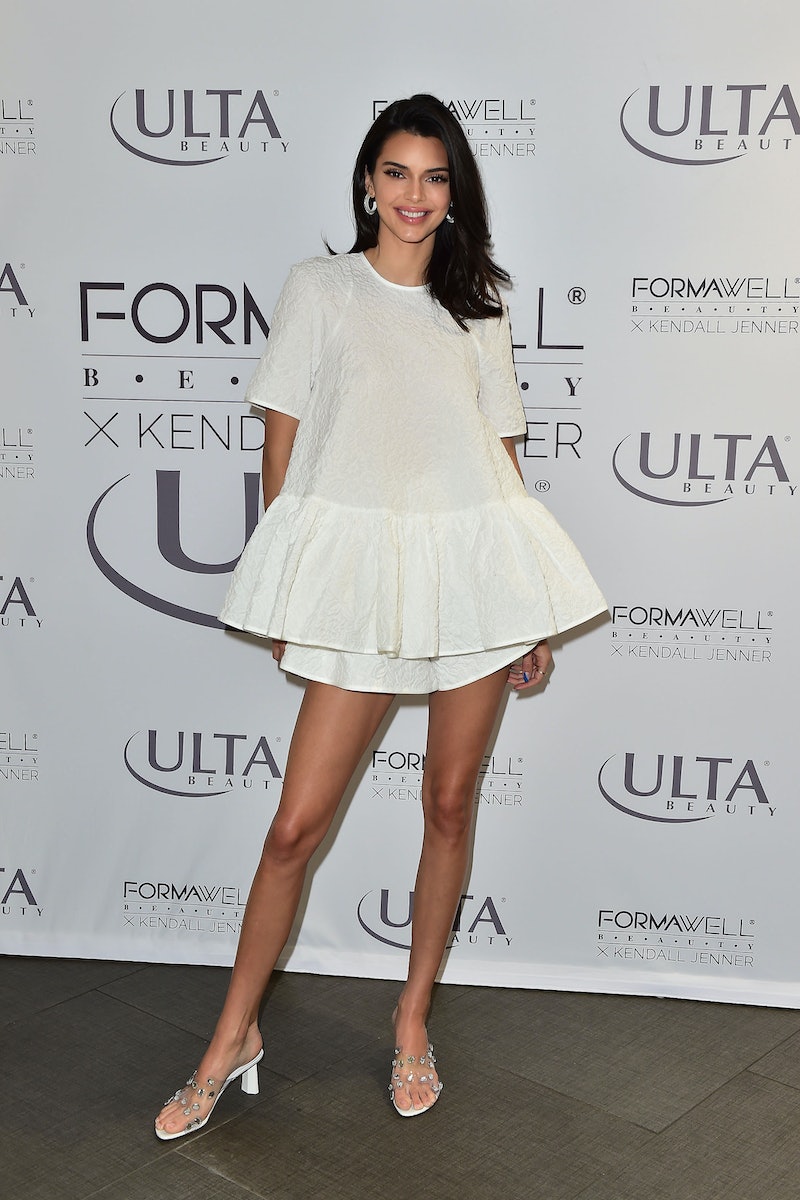 Kendall Jenner should probably still be in bed right now. It's 8:25 a.m. on a Wednesday morning and the night before, she was out late at Travis Scott's gas station-themed birthday party, thrown by his girlfriend (and her sister) Kylie Jenner. Instead, the 23-year-old supermodel is bright-eyed and camera-ready at the ULTA Beauty in Westwood, Los Angeles to celebrate her partnership with Formawell Beauty. She's wearing a darling white Cecilie Bahnsen babydoll dress, her shiny, shoulder-length hair perfectly coiffed with the ends flipped out. It's really no wonder she's a hair care brand ambassador, never mind her 109 million followers on Instagram or her world-famous DNA.

So, how does she get her million-dollar locks to look so good? "I wash my hair every day and for some reason it works for me. I've been doing it since I was a baby," Jenner shares, recognizing that her hair care secret isn't all that groundbreaking, but one that she swears by.

Another reason? She loves her bedhead. Because Jenner was born with such straight strands, her other hair trick is sleeping with her hair wet. "I already was doing it all the time, but this hair stylist on set [reaffirmed that] if you just go to bed with your hair wet, you wake up in the morning and have texture. I have an issue with volume, so it always falls really flat. When I go to bed [with wet hair], I get little bumps and I love that," she explains.

Her answers are the equivalent of an actress describing her skin care routine as being one-step — you know, the ones who claim to "only" use Cetaphil — but I don't think Jenner is being insincere at all. She has always been known as the naturally gorgeous, very "chill" Kardashian-Jenner sister whose beauty and life MO is one that Marie Kondo would likely approve of. It's why she chose to work with Formawell Beauty — she's a fan of how easy the salon-quality tools are to use at home and how they won't damage her hair between gigs. It's why you won't find more than a toothbrush and toothpaste on her bathroom counter ("I'm very minimal," she explains). And it's also why of all her sisters, she turns to Kim Kardashian-West most for beauty advice.

"I think her and I can relate on beauty most of the time because I think I'm a little bit more of the 'less is more' type and I think that she can relate to that more than some of my other sisters can," Jenner says. Even then, her eldest sister is still a little more, well, more than she is. "I don't know if any of them really are on the same level of less is more as I am, but [Kim] gives good beauty advice," she says, smiling.

Jenner recalls one of the first pieces of skin care advice she learned from her sisters. "I remember vividly being really young and like, sitting by the pool with my sisters. One of them had a pimple or something and they were like, 'Girls, never touch your face. Your hands are dirty [and then] you put those dirty hands on your face?!'" she recounts. Jenner doesn't think she touched her face without washing her hands for years after that. "I was mortified," she says.

The Victoria's Secret Angel has always looked to Kim and her other sisters for guidance, ever since she was little. But although she looked different than they did, in no way did they make her feel like an outsider, contrary to what was concluded in a recent interview she had with The Telegraph.

"I never said that in a way of like, trying to pull a pity party. I just meant we had different body types. I had to figure out what suited mine and what made sense for me," Jenner explains of her interview. "My sisters were obviously, [and] still are, the people that I looked up to and when I was younger. I was much more impressionable, so I was trying to dress like them and then I'd [be like], 'Why isn't anything fitting me like it fits them?" she tells me.

Jenner says there was a learning curve, but eventually, she found and defined her own personal style, thanks in large part to her job as a model working with different brands. But for the record, she didn't have a traumatizing childhood because of her sisters. "I wasn't some depressed kid because I didn't have boobs," she laughs.

"I'm so lucky with the sisters that I have — we've all just been raised to be so supportive of each other."

Jenner becomes a little defensive after I ask about feeling left out, perhaps as a way to protect herself and her sisters from the fake feuds the media loves to create between the famous family members. (She is the "sensitive" sister, after all). Despite what we see on camera on Keeping Up With The Kardashians and what we read off camera, Jenner wants to be clear — there are no competitive bones in their bodies and they are all constantly encouraging one another in all of their different projects and endeavors.

"I'm so lucky with the sisters that I have — we've all just been raised to be so supportive of each other," she tells me. Jenner says that while they all have different career paths and interests, at the end of the day they always "come back together as one" and that being jealous of one another has never been an issue. "I literally can't explain it because it has never really even been a thought," she says.

Jenner is quick to dispel anything negative you have to say about her family, her sisters, or herself, which makes sense — she's been in the public eye, at the butt of jokes and on the covers of tabloids for her entire life. She says she's had a lot of years to practice how to deal with all of the haters and the trolls, but it still affects her. "I'm human, I'm not always perfect," she says.

Again, she credits her sisters for showing her how to handle the unsolicited opinions and criticisms everyone seems to have for the Kardashian-Jenners. "I have so many older sisters who I got to watch deal with everything, and it's never easy. I'm not going to sit here and say like, it's whatever. I fall victim to reading those things sometimes, but I think I try and stay away from it. You know, that negative energy that they put into the world only reflects on them. I don't ever try and let it bother me," she explains.

Like Jenner, her burgeoning number of nieces and nephews will share a similar experience growing up famous. I ask her if she has any advice for them.

"I don't think I need to give any advice to North. She has got it covered," she says. I bring up the fact that they recently wore the same top, which she tells me North wore first. "I can't even explain how like, this girl just knows everything. She dresses herself every day in the most fire outfits. She's just got it together. I don't need to tell her anything ever. World, look out for North," warns Jenner.

It's still too early to tell what the budding fashionista will do with her innate talents as she continues to grow up. But if North is as in tune as Jenner says she is, at the very least she'll be the next family member to continuously shape celebrity pop culture, all while defending her sister, cousins, aunts, and uncles from all the haters, just like her auntie Kendall.