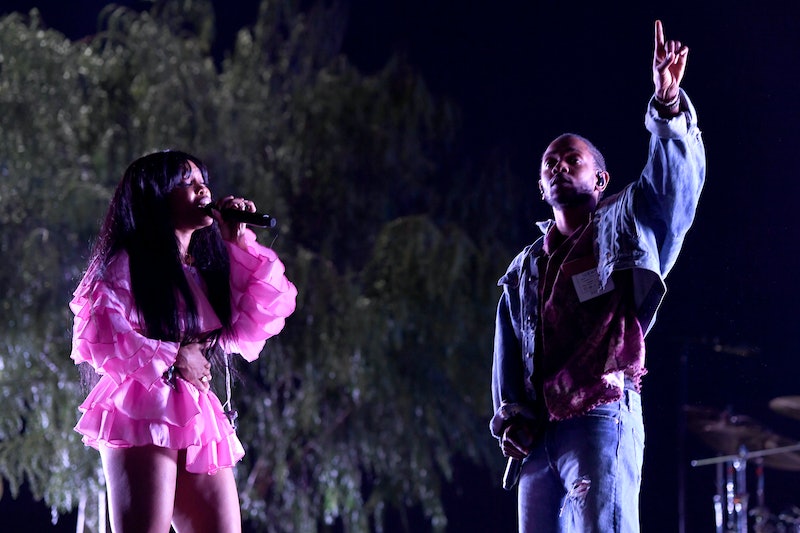 It's official: All of the Oscar-nominated songs will be performed at the awards show this year — except for one. Kendrick Lamar and SZA won't be singing "All the Stars" at the Oscars this weekend, the Academy has confirmed to Bustle. And fans aren't happy that the song from the Black Panther soundtrack won't be featured at the ceremony. (Bustle reached out to Lamar and SZA's reps for comment, but has not yet heard back.)

"All the Stars" is one of five nominees for Best Original Song at Sunday's upcoming awards show. The other four songs — "I'll Fight" from RBG, "Shallow" from A Star Is Born, "When a Cowboy Trades His Spurs for Wings" from The Ballad of Buster Scruggs, and "The Place Where Lost Things Go" from Mary Poppins Returns, will all be performed at the Oscars, Variety reported on Thursday.

The news is definitely disappointing for Black Panther fans. The Marvel film is nominated for Best Picture this year (unlike RBG, Mary Poppins Returns, and The Ballad of Buster Scruggs), so it would have made a lot of sense for the song to be included in the show. And fans aren't happy that they won't be hearing "All the Stars" performed live on Sunday.

"Lol well there goes any chance of me watching," one person tweeted. "Emily blunt isn't singing, kendrick and sza aren't singing this oscars is officially the worst," another fan wrote.

And at least one fan pointed out that it's a bit odd there are performers at this year's show who aren't actually nominated for any awards. Adam Lambert and Queen will be performing at the Oscars. So it does seem like there should be time for "All the Stars" to be performed, if there's time for the other musicians to be included in the show. (And if Lamar and SZA weren't available to perform, the Academy could always have gotten someone else to sing "All the Stars.")

"Y'all have Adam Lambert +!Queen performing songs that aren’t even nominated but don’t have Kendrick Lamar + Sza performing their nominated song?? Cool, all for ratings," one fan tweeted.

A few other fans tweeted, wondering what could have been if the two artists did perform at the Oscars.

The news even found its way into a popular meme, too.

According to Variety's report, the Academy did reportedly try to get SZA and Lamar to perform at the show. It's not clear if their absence is due to their own schedules or another reason, but fans are definitely disappointed either way.

In addition to Best Picture and Best Original Song, Black Panther is also nominated for Music (Original Score), Costume Design, Production Design, Sound Editing, and Sound Mixing at the upcoming Oscars. So while the fact that the song won't be performed is disappointing, there could still be plenty of good news for fans at the ceremony, if the movie takes home some of those awards. But for fans who were already skeptical about the upcoming show, this isn't a great sign.