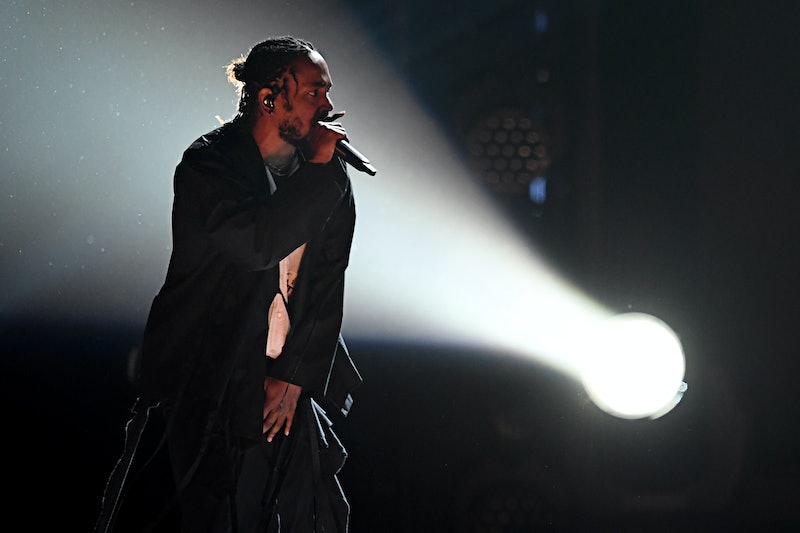 Rap legend. Grammy-winner. History-maker. On April 16, Kendrick Lamar won a Pulitzer Prize for DAMN., and his album is the first rap album ever to receive the prestigious award. After Lamar released DAMN. in 2017, it was widely praised by critics for its politically-charged lyrics and timely, cultural significance. But now the album is significant for another reason. In all of the 75 years that the category has existed, no album in the rap genre has even been nominated — much less won — the Pulitzer Prize for Music, according to The Ringer.

In past years, as per CNN, the award has typically gone to a classical or jazz album. In fact, from 1943 — the year the award for music was first established — to 1996, the winners in the category were strictly works from the classical genre, according to the Verge. It wasn't until 1997 that a jazz musician — trumpet player Wynton Marsalis — received the award. And now, more than 20 years later, rap music is finally being honored as it should be.

On the official list of the 2018 Pulitzer Prize winners, Lamar's album, DAMN., is described as, "a virtuosic song collection unified by its vernacular authenticity and rhythmic dynamism that offers affecting vignettes capturing the complexity of modern African-American life." That description is definitely accurate, but Lamar's insight about the album gives it even more meaning.

In July 2017, Lamar spoke with comedian Dave Chappelle in a feature for Interview magazine. When Chappelle asked the rapper what goes through his mind when he's writing an album, Lamar replied,

"I really focus on what my fans will take from it, people living their day-to-day lives. At the end of the day, the music isn’t for me; it’s for people who are going through their struggles and want to relate to someone who feels the same way they do. I’ve got to take Mom out of the equation. I’ve got to go all-in, expressing myself, right there in the moment."

At the 2018 Grammy Awards, "Humble" — one of the album's best-known tracks — brought home three separate wins. A second track, "Loyalty," tallied up another, and the album itself won Lamar a fifth Grammy that evening — his twelfth over-all — in the "Best Rap Album" category.

Now, Lamar's album, DAMN., has earned him a Pulitzer Prize for Music. It's undoubtedly an incredible accomplishment for any individual, but its historical significance makes it a major honor for the entirety of the hip-hop community as well. Congratulations to Lamar on this massively important win.