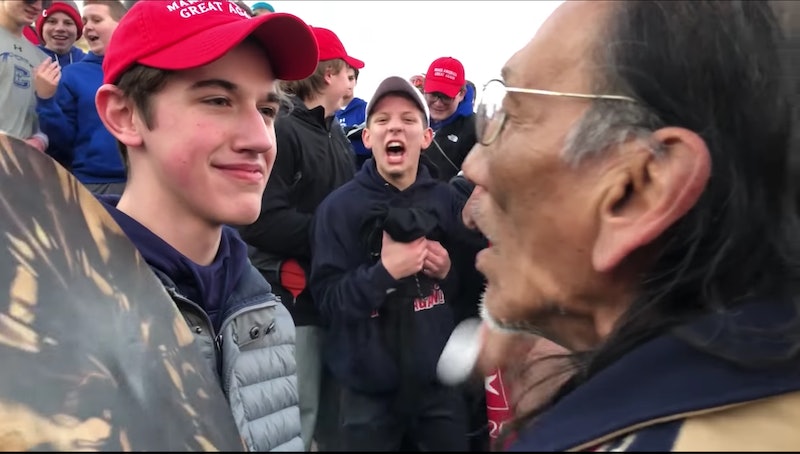 A Catholic school has responded after video of their students allegedly taunting a Native American elder at the Indigenous Peoples March went viral, sparking nationwide outrage and condemnation. In a statement shared to their website the Kentucky Catholic school condemned the students' behavior and said action would be taken against those involved following an investigation.

Footage surfaced online Saturday that appeared to show a large group of mostly white teenage boys crowding a small group of Indigenous Peoples March participants, including Omaha elder and Vietnam veteran Nathan Phillips. In the footage, many of the boys can be seen wearing Trump's signature "Make America Great Again" hats or sweatshirts while others appear to be wearing clothing baring Covington Catholic High School's insignia.

According to the Kentucky high school, students had been in Washington, D.C. on Friday to attend the March for Life event, which was held near the Indigenous Peoples March on the National Mall. A message posted to Covington Catholic High School's official website noted that the incident was "being investigated" and "appropriate action, up to and including expulsion," would be taken.

"This behavior is opposed to the Church's teachings on the dignity and respect of the human person," both the school and the diocese said in a statement. According to comments Phillips made in a video shared on Instagram by user ka_ya11, the boys had chanted, "Build that wall, build that wall" at him and other Indigenous Peoples March participants.

An eyewitness who filmed the incident told WLWT that Phillips had stepped in with his drum and chant when he saw the group of students beginning to clash with other nearby protestors. "He was trying to break up the conflict," Kaya Taitano told the news channel. "We ended up being surrounded by this group of kids." Taitano alleged the students were mocking Phillips' chanting. "I was amazed at the amount of disrespect shown," she said.

Phillips has shared a similar account of the incident, telling CNN the students were "angry at somebody else" and he chose to "put myself in front of that." He said one student then put himself in front of him, effectively blocking him from being able to move without having to make physical contact with the boy. "That would have been the thing that the group of people would've needed to spring on me," Phillips alleged.

Along with issuing an apology to Phillips, the Diocese of Covington and Covington Catholic High School also sought to apologize to all March of Life participants and pro-life supporters for "tainting" the event. "We know this incident also has tainted the entire witness of the March for Life and express our most sincere apologies to all those who attended the March and all those who support the pro-life movement," their statement said.