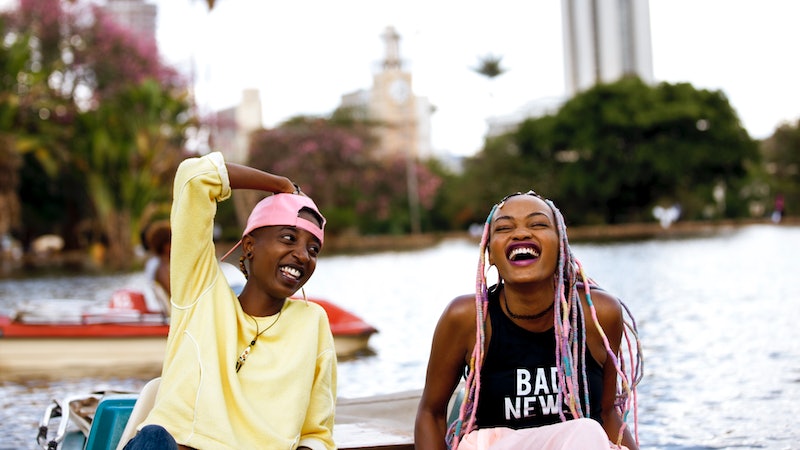 While being openly queer in some parts of the world might be illegal or difficult, it is not impossible. That's what Wanuri Kahiu's film Rafiki (opening in New York theaters April 19) shares, and beautifully so. Basing the film on Monica Arac de Nyeko's short story "Jambula Tree," Kahiu moves the setting from Uganda to Kenya, where she was born and raised. Rafiki (which translates to "friend") follows two young women, Kena and Ziki, who are instantly taken with one another, and almost as quickly come to understand their feelings are more than friendly. Many other lesbian and otherwise queer coming-of-age and coming out films have traversed similar territory in other parts of the world. But Rafiki is grounded in its modernity and specification and also in Kahiu's focus on exploring the joy of first love rather than its extreme hardships.

Homosexuality is currently illegal in Uganda and Kenya, though advocates are working hard to to change that, according to The Washington Post. But Kahiu tells Bustle she wasn't looking to make a political film — instead, she was looking to tell a love story from Kenya, with Kenyans.

"When I started reading books that I wanted to adapt to the screen, 'Jambula Tree' really, really leapt off the page because it was so sweet, so sensitive, so naive and had such courage and to me," Kahiu says over the phone. "Courage is something that's required to be in love and more so when you have a difficult type of love. So for it to be two women of color was a natural thing. I don't think it's a political statement."

Stars Samantha Mugatsia (Kena) and Sheila Munyiva (Ziki) are fearless in their respective roles — Kena is a shy, tomboyish introvert, while Ziki's personality is loud and colorful. Kena prefers to blend in, but begins to feel seen for who she is for the first time by Ziki, who embraces her queerness and her fearless flirtations with Kena despite knowing the consequences of being caught. The time they spend together on secret dates on the tops of buildings and on boat rides is a magical imagining of what life could look like for them if only they could spend it together. And they do, for as long as they can. One scene in particular has Zika performing a private dance for Kena, who blushes, shy in wanting to watch and enjoy something just for her — something she feels like she shouldn't have.

In some films, such as Carol, Disobedience or Desert Hearts, there's a kind of heat around the forbidden quality of two women being together this way, but Rafiki is less about the sexual draw of the secret than it is about the sweetness in Kena and Ziki experiencing first love. And yet the stakes are arguably higher in modern day Kenya compared to 1950s America or contemporary London. Homosexuality (included under the umbrella term of "unnatural sex") is not only illegal, but currently punishable by a 14-year prison sentence, as reported by The Guardian.

"Everybody's experience — especially for LGBT communities around the world — are completely different, and [the film is] so heavy influenced by those local factors," Kahiu says. "So in Rafiki, it wasn't only what you saw in the film which was religion and the conservative society, but it was also about state and privacy."

Outside of their family and religious community, queer people in places like Kenya, Kahiu explains, also have tribes they are part of, and an individual's class can also dictate how they are able to live. Kena and Ziki are members of different tribes, and Kena comes from a working class home, while Ziki's family is affluent.

"Class and tribe play a much larger part in the city that I come from than they would in a place where same-sex relationships are legal," the filmmaker says.

Because of Kenya's stance on homosexuality, Rafiki had a difficult trajectory to getting screened there. The Kenya Film Classification Board, operating under the government, banned the film ("due to its homosexual theme and clear intent to promote lesbianism in Kenya contrary to the law," according to their official statement) after Kahiu refused to change its ending, as The Hollywood Reporter details. (Without spoiling too much, Rafiki ends on a positive note rather than a punishing one for its central characters, another change from most other lesbian-themed films of the past.) But for Kahiu, infusing a Kenyan love story with optimism was Rafiki's raison d'etre.

"I thought [the end of the film] was important because there are so many LGBT films that I have watched in the lead up to this where, if it was a lesbian couple, they'd either end up with a man or they would have some kind of tragedy befall them," she says. "And I thought that negated the whole idea of being in a society that works toward a more hopeful way of being integrated despite your color, your sexuality, or anything. So it was incredibly important and very, very deliberate how we use hope and joy as parts of the language of the film."

After the Classifications board banned Rafiki, Kahiu fought to have it screened there for the seven days necessary to be eligible for an Academy Award, as reported by The Globe and Mail. It was the first Kenyan film to screen at Cannes, where it received high praise and enough buzz that in September 2018, the Kenyan High Court lifted the ban for one week of screening in Nairobi, where it was completely sold out, as CNN noted. The Kenyan Oscars selection committee ultimately chose a film called Supa Mod as their Best Foreign Language Film nominee over Rafiki. Regarding the decision, head of Kenya's Classifications Board, Ezekiel Mutua, tweeted, "Had the Rafiki producers complied with the recommendations of the Board to delete the portion of the movie that glorifies homosexuality, we would have rated it 18. I can bet it would have qualified for nomination to the Oscars and would have won an award. See now!"

Kahiu says the backlash from Mutua and the board surprised her. "And mostly because he just made it as sort of a public vendetta to come out after me in press and in that state," she adds. "So while we knew there was a possibility of the film being banned, it felt like sort of a vicious attack with the way he kind of personalized this idea of this work I created and that was surprising. I did not expect that."

It wasn't just homophobia Kahiu was up against, but misogyny. She says she was taken aback by how patriarchal viewpoints are so internalized by men in power (as well as the women who support them), but that dealing with it in such a pointed way made it feel tangible for the first time.

"The extent of it and the depth of it and the complexity of it became very, very evident as the result of making this film," she said. "And that's something I think I need to make another film about — the idea of toxic masculinity."

In some ways, it's ironic how beleaguered the road to theaters was for the film. Because while Rafiki could have easily been more focused on the hardships Kena and Ziki face, it's most successful in its portrayal of a first love and how heightened those feelings can be, especially when being together requires more courage than being in a conventionally accepted relationship.

"It's such a magical time, that moment of falling in love," Kahiu says. "And I really really wanted to honor that time, and the only way I could do that was through hope and joy."