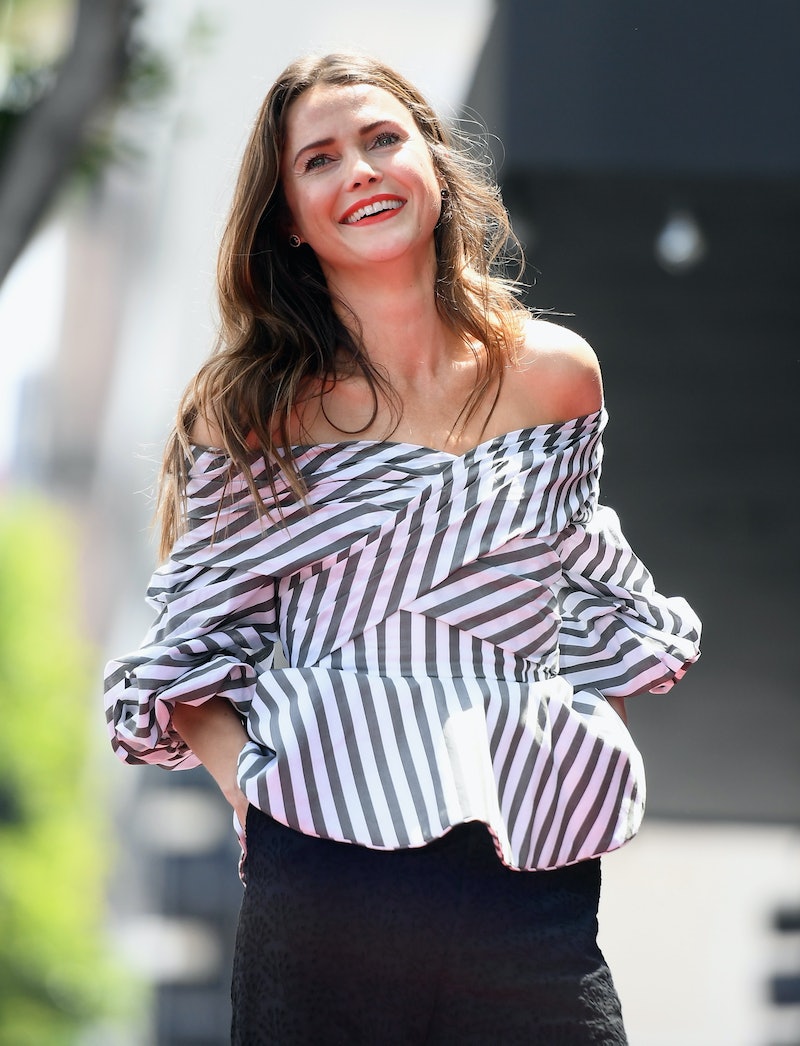 Keri Russell is heading to space. The Americans actor is reportedly being considered for the next Star Wars film. That's right, Keri Russell might join Star Wars: Episode IX. As reported by Variety, sources say that Russell is currently in talks with writer-director J.J. Abrams for a role in the very secretive franchise. (Bustle reached out for comment to Russell's reps and Lucasfilm, but they did not immediately respond.)

Abrams and Russell previously worked together on the hit series Felicity, making this casting, if true, one hell of a '90s reunion. As of now, the potential casting is just a rumor, but that has not stopped fans from going wild on Twitter and speculating who Russell might be playing in a galaxy far, far away. According to Variety's report, the only thing known about Russell's potential Star Wars character is that the role "calls for action-heavy fight scenes." But that's not a ton to go on.

Luckily, Star Wars fans have another clue to turn to when it comes to figuring out who Russell might play in the franchise: her hair. As a white, brunette actor, Russell definitely fits the Star Wars leading lady mold. Carrie Fisher's Princess Leia of the original trilogy, Natalie Portman as Padmé in the prequels, Rogue One's Felicity Jones as Jyn Erso, Emilia Clarke's Qi'ra in Solo, and the new trilogy's Daisy Ridley as Rey are all brunettes, sparking endless fan theories of potential familial relationships. (Star Wars loves a good surprise parentage twist, after all.)

News of Russell's potential casting will no doubt also inspire some rumors as to how she fits in relation to other established characters. Some fans on Twitter are already asking whether Russell will play Rey's mother.

And if she is not Rey's mom?

Maybe she will play someone who is part of Rey's family tree.

She could be Rey's, like, aunt. Or cousin. Or long-lost sister. And the predictions don't stop at "possible relative of Rey."

For all any of us know, Russell could play any Star Wars character's relative.

Or heck, maybe she will play a baby in a galaxy wahhh wahhh a-wahhhh?

Now that would be something. Or, you know, her character may very well not be related to any existing Star Wars character.

Russell could play a villain. A Force-sensitive villain who works with Kylo Ren. *Gasp.*

Whatever it is, Russell stans are cool with it.

Speaking of the Force, how about this theory? It is quite the intriguing prediction. What if Russell plays a Jedi who helps Rey sharpen her Force skills? After all, Rey — Star Wars: The Last Jedi spoiler ahead — may be looking for a new Force instructor after what happened at the end of Episode VIII.

Oh, man. If Star Wars: Episode IX returns to Canto Bright within the first few minutes of the movie, it won't be a second too soon. That planet is a feast for the eyes.

And for good measure, here is one more "Russell will play someone's mom in Episode IX" theory.

Aaaand that is the Star Wars fanfic we never knew we needed.

If the casting report is true, it will be a while before we get to see Russell in the forthcoming chapter in the Star Wars franchise. Episode IX will not hit theaters until Dec. 20, 2019. Patient or do not be patient, there is no try. May the Felicity, er, Force be with you.