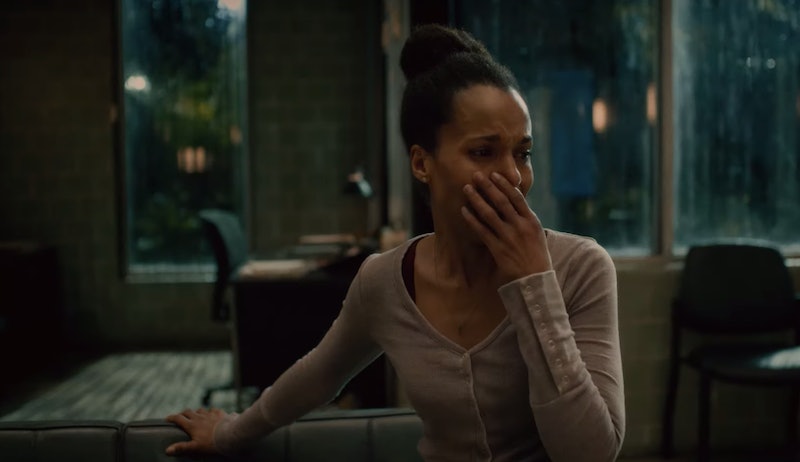 Although she wasn't up for any awards at the 2019 Emmys, Kerry Washington still managed to steal the show when the trailer for her Netflix film, American Son, debuted during a commercial break. The film is an adaptation of the Broadway play written by Christopher Demos-Brown. Like the play, the movie also takes place in a Miami police station on a stormy night as Washington's character Kendra Ellis-Connor and her white husband, played by Steven Pasquale, face off with detectives, played by Jeremy Jordan and Eugene Lee, as they all search (in some capacity) for her 18-year-old son, who might have died at the hands of cops.

In the teaser, a clock ticks as Washington anxiously paces around and confronts the officers. Jordan's character tries to assure the distraught mother by saying, “I have kids, too.”

“Any of them Black?” Washington’s character retorts. When he raises his eyebrows, not understanding her questions, she takes an Olivia Pope-style moment to sigh and dig in.

“Let me start again,” Kendra says, her hair in a messy top knot as she paces around the set. Cue everyone furiously adding the Netflix movie, which premieres on Nov. 1, to their watchlists.

The subject matter of the play and film are uncomfortable but especially timely given current conversations around police brutality — and the success of Ava DuVernay's Netflix docuseries about the real-life events of the Central Park 5 case, When They See Us, which was nominated for 10 Emmys and won one on Sunday night.

The premise doesn't always sit easy with critics. The play was controversially not nominated at the 2019 Tony Awards, and this film version of American Son also received mixed reviews at the Toronto International Film Festival in September 2019. Variety wrote of the Netflix adaptation that the film was a "strong spur for discussion on various hot-button topics" but that it "feels very much like an overly schematic recitation of talking points whose acting histrionics still seem scaled for the boards— a little too big and loud in their 90-minute close-up. The result is worthy yet heavy-handed, too often coming off as an editorializing lecture or essay in thinly fictionalized form."

Still, people on Twitter who caught the trailer during the 2019 Emmys were immediately drawn to the premise of the new Netflix movie — and the idea of getting to watch Washington onscreen again.

But if you're waiting for a reprise of Washington's Olivia Pope character from Scandal, think again. Washington told People that her character here is "like the un-Olivia Pope." "She's about as different from Olivia Pope as you can possibly get, and I think that’s probably why I was drawn to her. She was such a huge challenge for me as an actress to spend seven or eight years playing somebody and then try to have the pendulum swing in the total opposite direction. She is not — there is no Prada in this one folks, sorry.”

Washington's new Netflix movie American Son might not be as glamorous as her previous projects, but given the reception from fans and critics, it will most definitely be the movie everyone is talking about come November.