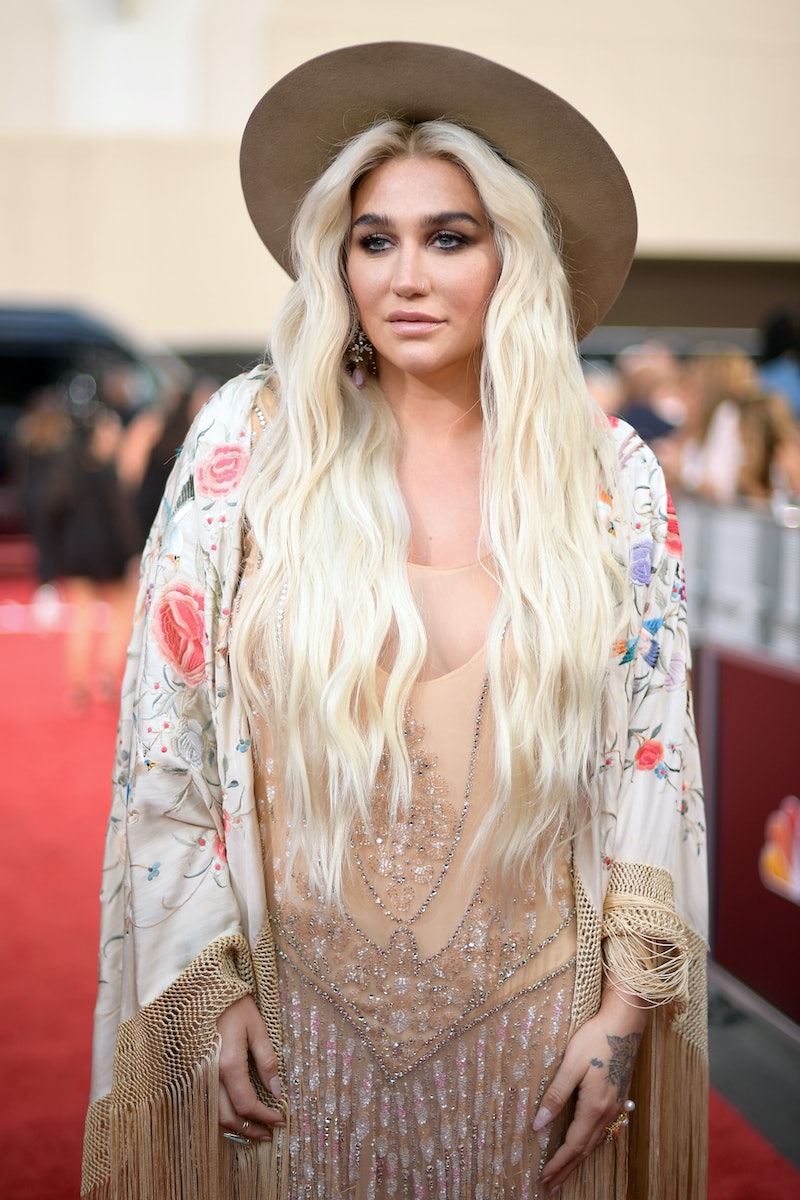 Kesha has just made a major hair change, swapping in her trademark blonde locks for an unexpected shade. Kesha is a brunette now, and she looks completely different thanks to the drastic color swap. The "Praying" singer debuted her new look on June 4, during a Pride-themed launch party for the Saks x Stonewall Inn collection. Kesha performed at The Paradise Club in Times Square, and she had fans doing a double take as she stepped on stage with her dark brown hair.

As of right now there is no mention of who did Kesha's hair, but with a little bit of sleuthing it looks like stylist Samantha Burkhart might be behind the transformation. Burkhart is a Los Angeles-based stylist who is frequently enlisted by musicians such as Billie Eilish, Sia, and Kesha for everything from red carpets to photo shoots.

Vittorio Masecchia, who did Kesha's makeup for The Paradise Club, welcomed Kesha "to the dark side," and tagged Burkhart in the photo. Bustle reached out to Burkhart but has not received a comment.

Seeing how Kesha was formally welcomed into the dark hair club, this could be a permanent hair change and not simply a wig for the event.

On June 4, Kesha also posted a series of photos onto Instagram with her new brown hair, along with an announcement that she is dropping new music. The new single is called "Rich, White, Straight Men," and it's carnival-esque, angry beat matches her new dark hairstyle.

Before she announced her new surprise track, Kesha first invited fans to "check out my hairs." Fans in the comment section weren't completely convinced that the hair transformation was permanent. Some believed it was simply a wig for an upcoming music video, especially since Kesha announced a new album that was dropping soon.

Ever since she dropped her debut single “TiK ToK” in 2009, Kesha has been a devout blonde. Seeing her trade in her bright platinum waves for an Ashlee Simpson hairstyle circa 2004 hairstyle is pretty unexpected. But maybe Kesha decided that having the same look for a decade warranted a change.

To be fair, Kesha did have some hair change-ups throughout the last 10 years, but all of them revolved around out-of-the-box shades. In 2014, Kesha sported a pale lavender hair color, jumping onto the pastel hair trend. That same year she also tried out a light blue look, as well as a rainbow striped look.

In 2015, Kesha revealed lime green hair that came courtesy of Manic Panic. According to People, the singer mixed a combo of “Electric Banana” and “Electric Lizard" to get her shade.

Later in 2016, Kesha tried out the silver hair trend, lightening her blonde locks into a slightly chrome color.

Then in 2017, Kesha tried out the cotton candy pink hair trend, coloring her long waves a soft pink hue.

It appears that this brunette shade is the first time Kesha changed her hair into a different natural color, so let's see how long this shade lasts before she switches back to her iconic blonde.