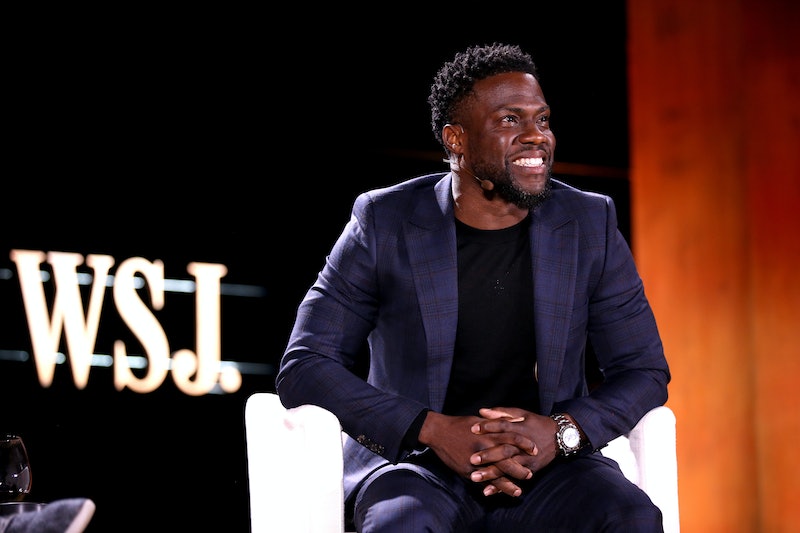 The Oscars might still seem far away, but the planning for the big Hollywood evening is full steam ahead. Comedian Kevin Hart confirmed he will host the 2019 Oscars in a heartfelt Instagram post on Tuesday night, where he said that it's been a goal of his for years to take the stage on such a historic evening. So as happy as you are that the hysterical performer will take the reins for the big event, it's safe to say that Hart himself might be even more thrilled.

On Instagram, Hart wrote, "For years I have been asked if I would ever Host the Oscars and my answer was always the same...that it would be the opportunity of a lifetime for me as a comedian and that it will happen when it's suppose to."

Hart went on to say how happy he was to announce that the day had finally come. He continued, "I am blown away simply because this has been a goal on my list for a long time...To be able to join the legendary list of host[s] that have graced that stage is unbelievable."

Hart then honored his late mother, and thanked his family, friends, and fans for their support in getting him to this moment. "I will be sure to make this years Oscars a special one," he promised.

The 2019 Oscars are set to air on Feb. 24. The last two years have been hosted by Jimmy Kimmel. In a Variety cover story last year, Hart spelled out his Oscar aspirations, saying, "It would be something I would definitely do just to say I did it in my career. It would be great to say I had that moment."

He also emphasized the same point that he made in his Instagram post on Tuesday night: that he wished his mother could see him do it. Hart spoke about his mother, who died of cancer in 2007, at length, sharing how she paid his rent when he first moved to New York to pursue being a comedian, and how she swore her family to secrecy about her illness at first because it coincided with a film Hart was set to be in, Fool's Gold.

Hart's older brother recalled to Variety that his mother said, "I need him to be able to go forward because I see him doing great things.”

Hart said of his mother, “Anything I’d ever done, she had it. She never missed anything.”

It's undoubtable that the 2019 Oscars are going to be a massive milestone for Hart, personally. But they also might signify a milestone for the awards show on a grander level. The Academy has been criticized heavily for its utter lack of diversity in recent years. This lack of diversity triggered a viral hashtag #OscarsSoWhite leading up to the 2018 Oscars, and still, none of the 2018 acting Oscars were given to people of color.

Of course, the decision to cast Hart arguably has no impact on who will win the Oscars. But Hart will only be the second person of color to host the Oscars since 2001. One can hope that this decision represents a concerted effort by the Academy to shift in a more inclusive direction.

More like this
Britney Spears & Sam Asghari Called Out Kevin Federline’s Claims About Her Kids
By Grace Wehniainen
All The Celebrity Relatives Revealed On 'Claim To Fame' So Far
By Brad Witter
Will Smith Apologizes For His Infamous Oscars Slap In A New Video
By Marina Watts
John Travolta, Elton John, & More Celebs React To Olivia Newton-John's Death
By Radhika Menon
Get Even More From Bustle — Sign Up For The Newsletter