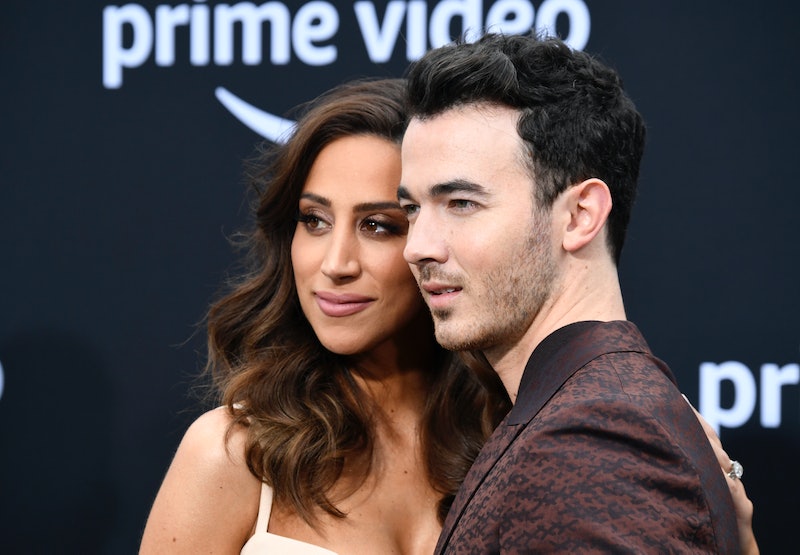 One of the J-Sisters just had a birthday, and her husband really went all out for the occasion. He actually went so all out for her big day that he's probably going to have a tough time outdoing himself for years to come. Kevin Jonas' birthday present for his wife Danielle was a gift that keeps on giving. It was also a gift that keeps on licking, wagging, and barking. Yes, that's right — he got her a puppy, as Danielle revealed on her Instagram Story. Kevin also dedicated an incredibly sweet social media post to his wife as well and — oh, right. He threw her a surprise party on a private plane. No big deal, very low-key.

On Sept. 18, Danielle turned 33, and her famous husband marked the occasion by sharing a black-and-white photo of the two of them looking all dressed up and dapper. "You light up my life every minute of every day!" Kevin captioned the shot on Instagram. "I hope today I can make sure you know how much you are loved and cared about! I love you always and forever baby. Happy birthday!"

But wait — there's more. So much more. Danielle got not one, but two surprises on her special day, as well as a ton of well-wishes from family and friends.

Danielle gave fans a glimpse of all the fun via a few clips on her Instagram Story, and the whole thing kicked off with a surprise party on the Jonas Brothers' private plane, as a pic from her celebrity party planner pal @mikierusso revealed. The inside of the plane was decked out with all kinds of decorations when she arrived, and she legitimately looked shocked to see her friends on-board.

The third clip in Danielle's birthday series shows her snuggling up to her new pup. "She's the cutest thing," Kevin can be heard saying off-camera. "She's calming down so much for you right now," he admitted, as his wife continued to lovingly pet her present. "Ohmygod, she's so sweet," Danielle said and gave the dog a snuggly squeeze.

The next clip shows Kevin, Danielle, and the puppy in what appears to be a hotel hallway, which suggests that they didn't just party on the airplane, they actually took a trip somewhere, too. In the video, Danielle gently places the pup down on the carpeted floor and takes off sprinting down the hall. Almost immediately after she starts running, the puppy starts running right behind her. OK, it was actually more of like, a pouncing-hop-run, and it's so hilariously cute.

The final photo she shared simply shows the pooch sitting still and being a very good girl. "My new baby," Danielle captioned the pic. It doesn't seem as if they've decided on a name for the little girl yet, but wow — that face! Those teeny-tiny eyes! Her little white tuft of fluffy fur! It's almost too much to bear.

Kevin and Danielle have been together for more than a decade now, after first crossing paths while they were both vacationing in the Bahamas way back in 2007. They tied the knot on Long Island in December 2009, and have since welcomed two daughters into the world: Alena, 5, and Valentina, 2. It appears as if the little girls skipped their mom's airplane party, but they're definitely going to have a ton of fun with the family's new pup when their parents get home.