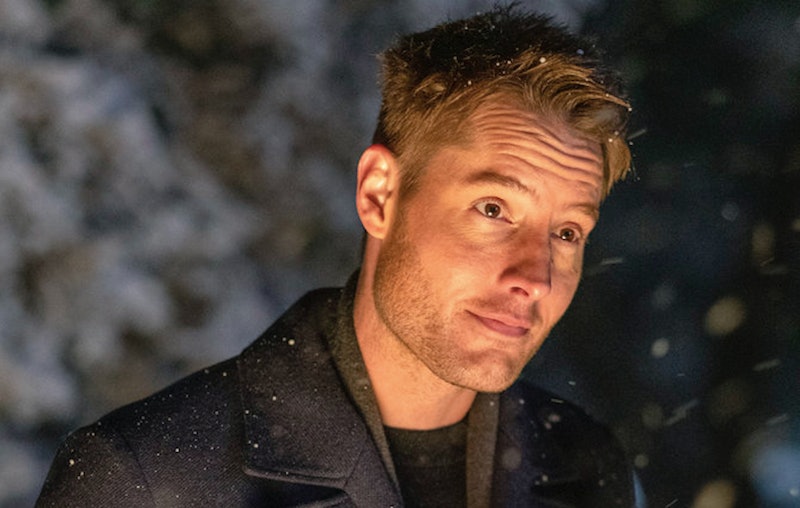 There's still a lot of mystery surrounding the flash-forward to the way, way future when the Pearsons gather around Rebecca's bedside. However, last Tuesday's This Is Us episode "The Cabin" gave a glimpse at Older Kevin and a little more background on how his future house came to be. In fact, the scene prompted one fan to look back and recall an interesting detail about Old Kevin in a previous This Is Us flash-forward that hints at major career success in the years to come.

The last time fans journeyed forward to this particular moment in time was during the Season 3 finale, which revealed a bed-ridden Rebecca and her loving family flocking to her side. At one point, Old Randall wanders off to go visit with her and while doing so he helpfully gives viewers a tour of Kevin's house. Reddit user Marty5151 pointed out that it's quite possible that some of those gold-looking figures on Kevin's bookshelves could very well be Academy Awards that he wins throughout the course of his budding acting career. "I bet Kevin's career takes off in his 40s," the user theorized.

If you go back to the scene in question, it's difficult to tell what those figures exactly are, given they're so far away. They could just be decorative figurines, though it's difficult to deny that they do seem to resemble the shape and overall appearance of an Oscar.

It's possible that this detail turns out to be nothing at all, but then again, when has This Is Us ever done something for no reason at all? The show has a habit of sprinkling clues throughout various flashbacks and flash-forwards to see if diehard fans will pick up on them. (Do you have any idea how often the infamous Crock-Pot showed up in flashbacks prior to the fire?) So we shouldn't put it past the show to drop various hints like this along the way.

And it's not like Kevin doesn't deserve a little bit of good news in his life, given what a difficult journey he's had along the way. The poor guy has more than earned a happy and successful ending by this point.

Whether or not this theory turns out to be true, it's still heartwarming to know that Kevin ends up building his own family in the dream house his father had envisioned. Jack may be gone, but thanks to Kevin, a part of him will live on forever.