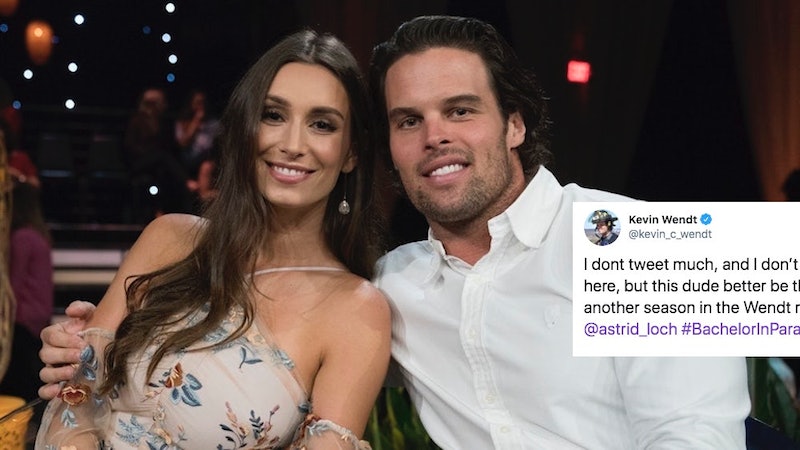 Kevin Wendt may be one of the lucky few who found love on Bachelor in Paradise last season, but that doesn't mean he's afraid to call out the franchise when he deems it necessary. This was made especially clear in a recent tweet Kevin made about Mike becoming the next Bachelor. Prior to Tuesday night's episode, the former Paradise star took to his social media account and declared that if Mike isn't eventually crowned as next year's new rose-distributor then he and the members of his household are going to stop watching the show altogether out of protest.

"I dont tweet much, and I don’t read spoilers so I may be way off here, but this dude better be the Bachelor if we are watching another season in the Wendt residence," Kevin tweeted out on Tuesday. Needless to say, he appears to be firmly on the side of Team Mike and honestly, who can blame him? Many fans want to see Mike as the next Bachelor, not only because he would be the first black Bachelor ever in the show's history, but also because he's just a really, really great guy who is sweet, charismatic, and more than worthy of finding love.

Naturally, it didn't take long for Mike to see Kevin's message about him and tweet out a heartfelt response over his kind words. "Dude. I've read this tweet multiple times tonight and still have no words to effectively express my gratitude," Mike wrote. "Whoever is the bachelor, I'm certain the ppl in charge made the right decision for what they are looking for."

Just leave it to Mike to come up with such a respectful sentiment. The way he phrases that last part, though, makes it feel like he knows he wasn't chosen, but still wants to be a gentleman about the whole thing. We'd expect nothing less from him, but for now let's still just try to hold out hope that his Bachelor chances haven't come to a close just yet. After all, if ABC just needs some convincing about how much Mike is beloved by all, the producers simply need to go on Twitter and see what fellow Bach alums like Kevin are saying about him. And he's not alone in that endeavor.

During his departure from Paradise last night, the internet was flooded with sweet messages about Mike's character and how much the world collectively hopes he ends up finding his special someone.

Suffice it to say, Mike certainly has plenty of people in his corner who want to see him nab the position. But will it happen? Fans will just have to wait and see. He wasn't given a ton of screen time on Paradise, which could indicate producers aren't planning to go in that direction. You never know, though. Nick Viall and Colton Underwood were both on Paradise before becoming Bachelor. Perhaps Mike will be given a similar treatment. Only time will tell, but if things don't work out, there's a solid chance the series will lose a notable viewer in Kevin.