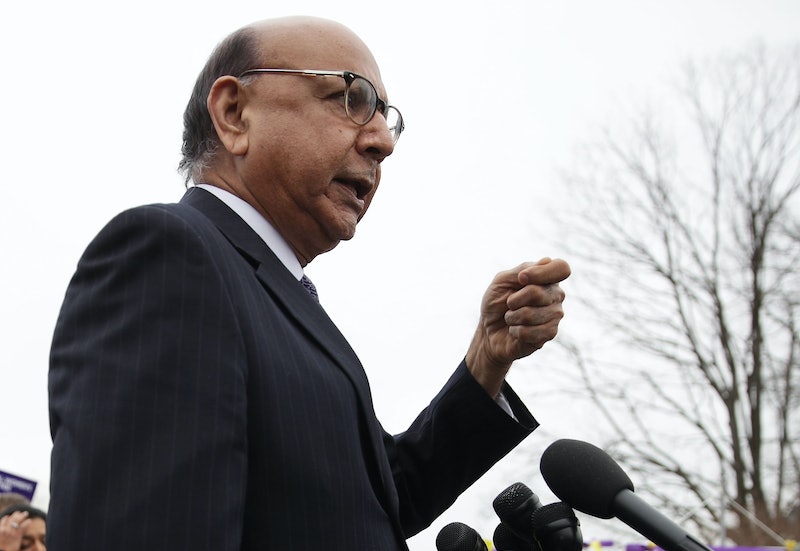 During an appearance on The View on Monday, Gold Star father Khizr Khan defended John McCain against Trump's recent attacks, inspiring a heartwarming moment of shared understanding with Meghan McCain. Khan is the father of fallen Army Captain Humayun Khan, and appeared at the 2016 Democratic National Convention to give a fiery speech in support of Hillary Clinton and in condemnation of Trump.

During his time on the show, Khan spoke out against Trump's recent remarks on late Senator McCain,

Khan then went on to explain that his relationship with McCain began in 2005, when he gave McCain's book, Why Courage Matters: a Way to a Braver Life, to his son. Khan said, "[The book] was the last book I sent to Captain Humayun Khan ... I asked him in my last conversation, 'Did you receive the book?' He said, 'This is a wonderful book. All of my camp is reading it and we are encouraged.' That is Senator McCain."

Khan concluded his speech by bringing the topic back to the present. He said, "This president forgot to read the chapter that teaches how to be commander in chief of the United States. Somebody should read it to him … so that he could learn to take care of those who have sacrificed so much."

In response, Meghan acknowledged the ways in which she and Khan have had similar experiences. In 2016, Trump attacked the Khan family following the death of their son, suggesting that Khan's speech at the DNC was scripted and that Khan's wife didn't speak at the DNC because her faith forbid it.

Meghan told Khan, "It's hard for me to talk about because I don't want to be emotional on TV all the time, but I don't know how you and your wife got through this. It is horrific."

Khan then explained that he endures the criticism of Trump and others through the "example of Senator McCain." He said, "Such examples elevate us as a nation." You can watch the video in full above.

Meghan addressed POTUS' remarks about her father last week, as well. Last Wednesday, she said on The View, "If I had told my dad seven months after you’re dead, you’re gonna be dominating the news and all over Twitter, he would think it was hilarious that our president was so jealous of him that he was dominating the news cycle in death as well."

Then Meghan clarified to viewers that she wasn't asking for sympathy. She said, "Do not feel bad for me and my family. We are blessed, we are a family of privilege." She continued, "Feel bad for people out there who are being bullied that don’t have support. That don’t have women of The View to come out and support their family.""