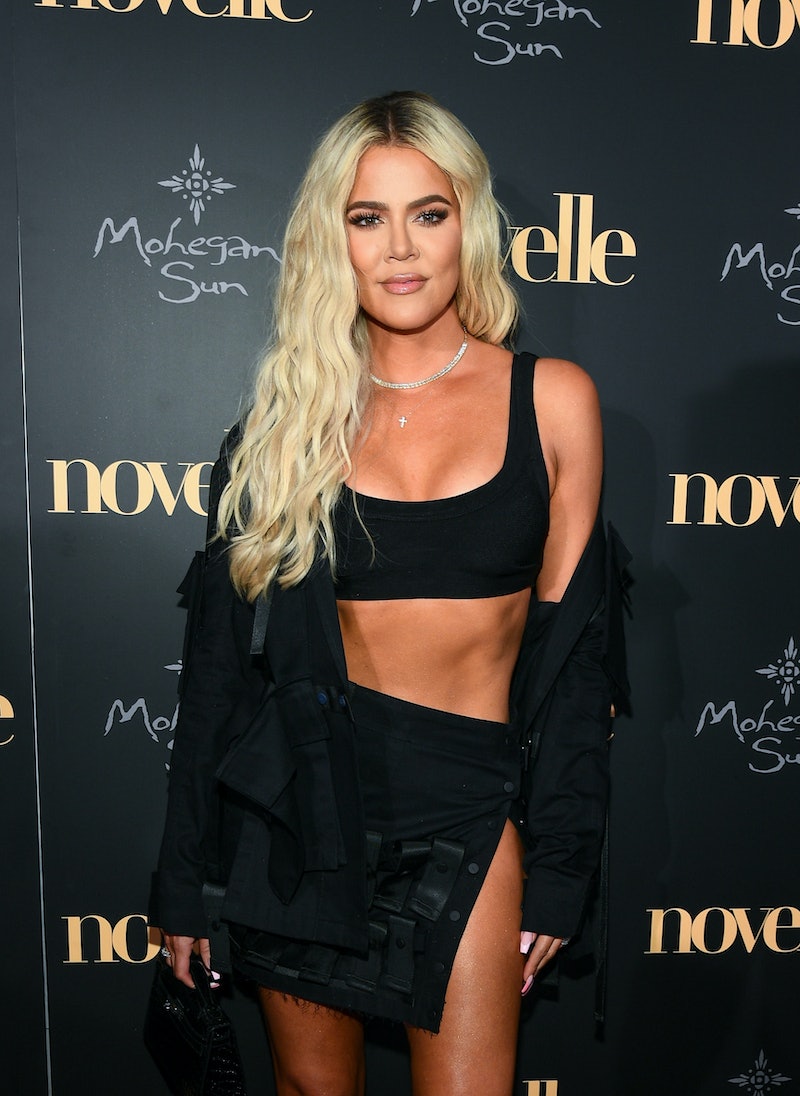 At this rate, they might as well change the title of Keeping Up With the Kardashians to Keeping Up With The Criticism — they can even spell criticism with a "K." If it seems like this family is constantly clapping back at haters, it's because they are. Recently, Khloé Kardashian shut down a claim that she uses her daughter as an accessory on Instagram, as reported by People.

On Aug. 19, the reality TV star posted a photo of herself strolling along the beach in the Bahamas while she was holding her daughter True. Khloé innocently captioned the post with, "I meant to post these yesterday" and some blue butterfly emojis. It's a sweet family photo. The backdrop is great. They're even wearing coordinating swimsuits. Who could find a reason to hate on this picture?

Well, someone did actually find a "reason" to be critical and even commented on Khloé's post directly. An Instagram user wrote, "U do know that your baby isn't an accessory right?" Even though her Instagram is (probably) blowing up with notifications at all times, Khloé did actually see this comment and she had no problem clapping back. The mother-of one-asked,

"Would you like a parent NOT to create memories and traditions with their child? Would you like someone else to watch my child and me to do these things on my own?"

Khloé continued, "I am her mother and we will celebrate life together everyday. True and I are creating magical memories TOGETHER FOREVER." And that includes taking photos, which plenty of other moms do as well.

Khloé isn't the only one who objected to the comment. Plenty of her fans stepped up on her behalf. One Instagram user wrote, "Do you know if you have nothing nice to say you shouldn't say anything? It's her baby and her life. Go find something else to do honey."

Another fan commented, "You're a great mom and don't worry about what other people say. What people think of you is none of your business. Keep on keeping on gf!!" That is true (pun intended), but it has to be hard to receive so many comments on her own post and not respond to at least one of them. (For the record, Khloé also responded to the many positive replies on the photo.)

A different commenter responded, "That's a pretty rough statement to make. I'm pretty sure it's called being a mom. You carry your kid and do stuff with them and take pics. That's what Instagram is for!"

And, let's be honest, if Khloé didn't post photos with her daughter, she probably would be criticized for that, because people would assume she wasn't spending time with her. Unfortunately, the woman can't win. Anyone who's actively looking for something negative will find it. Trolls are going to troll, so Khloé just has to keep it moving.

Regardless of anyone's opinions, Khloé and True are "making magical memories together forever." Hopefully, Khloé keeps her own words in mind, disregards the unwarranted opinions, and just continues to enjoy the vacation with her family.