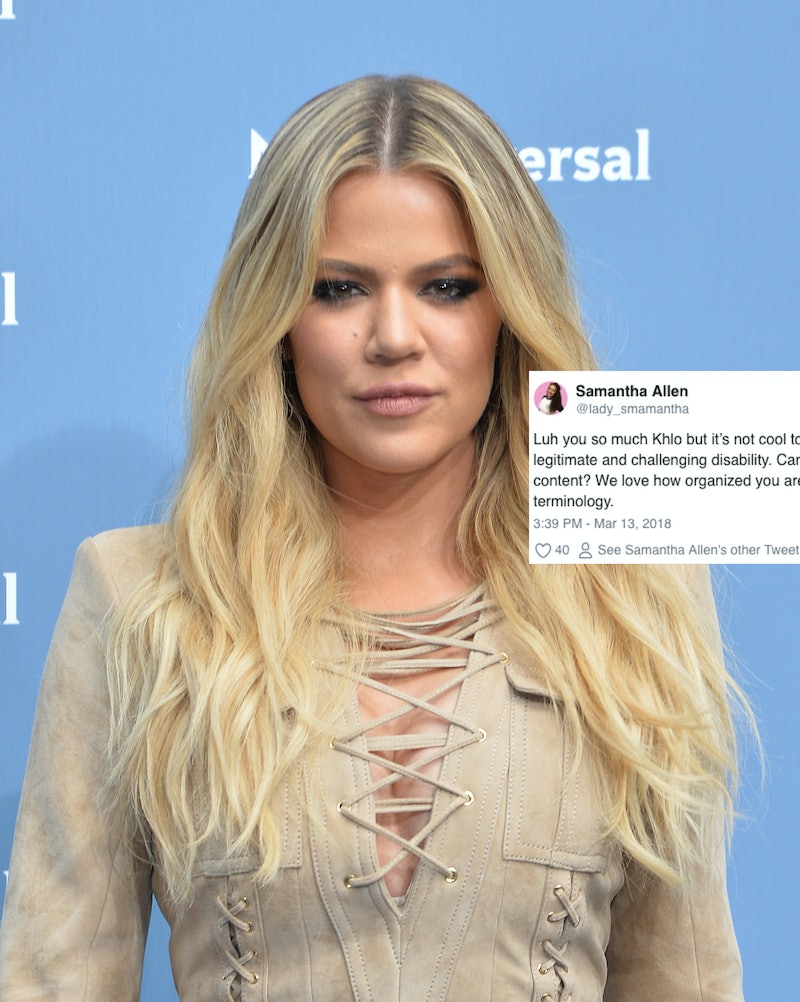 The Kardashian-Jenner family is no stranger to backlash, so it's no surprise Khloé Kardashian's "Khlo-C-D" posts are causing an uproar on Twitter. Kardashian is known for being organized. The Keeping Up With the Kardashians star has even coined a term for her neatness: "Khlo-C-D". Obviously, it's a play on OCD, obsessive-compulsive disorder, and fans are angrily pointing out to the 33-year-old reality star that OCD is a serious mental illness and not as simple as she seems to be making it. (Bustle has reached out to Kardashian's rep for comment on the backlash, but did not receive an immediate response.)

"Khlo-C-D" first started in 2015, according to Cosmopolitan, when Kardashian posted a YouTube video of herself organizing cookies and called the segment: "KHLO-C-D: Cookie Jars". Since then, it's become her thing whenever talking about organizing. Three years later and Kardashian continues to use the term. In a March 12 post on her website, the Revenge Body star explained why she has "Khlo-C-D" by saying: "I have always been Khlo-C-D — and I have Kris Jenner to thank, LOL. The interesting thing is my mom is a hoarder, but she demands cleanliness and structure from me (and all her kids)."

On March 14, in a post ranking her sisters from messiest to most organized, she wrote on her website: "I may put the Khlo in Khlo-C-D, but I'm not the only person in my family who likes things neat and orderly."

This week in particular, Kardashian has been putting the focus on "Khlo-C-D." She announced on Snapchat Monday she is hosting a week-long "Khlo-C-D" series on her app and website focusing on "cleanliness and organization", per Cosmo. She said she'll be sharing "lazy-girl hacks for cleaning everyday objects" and secrets to staying organized.

Fans are appalled that Kardashian would reference an issue that is actually quite serious to make a pun for her posts about organization and cleaning. Here are just a few of their responses:

She's So Far Off

She Needs To Rebrand Immediately

She Can Use Her Platform To Raise Awareness

These People Actually Suffer From OCD

Unfortunately, there are many common misconceptions when it comes to OCD. Sometimes people equate it to the need to have objects in the right place at all times or, like Kardashian, being neat. Organization can be part of the obsessions and compulsions stemming from the disease, but it's on a much more severe level compared to Kardashian taking 10 minutes to arrange a cookie jar.

The International OCD Foundation calls the disease "a mental health disorder", and according to the Mayo Clinic, "Obsessive-compulsive disorder (OCD) features a pattern of unreasonable thoughts and fears (obsessions) that lead you to do repetitive behaviors (compulsions). These obsessions and compulsions interfere with daily activities and cause significant distress."

As OCD UK explains, "According to some studies, OCD is the fourth most common mental disorder after depression, alcohol and substance misuse, and social phobia and thought to affect as many as 12 in every 1000 people (1.2 percent of the population) from young children to adults." Furthermore, "In fact, it can be so debilitating and disabling that the World Health Organization (WHO) has actually ranked OCD in the top ten of the most disabling illnesses of any kind, in terms of lost earnings and diminished quality of life."

So, yeah, OCD is serious and it should be treated as such. Ellen Scott, a lifestyle editor for Metro, wrote a piece titled, "Why Khloé Kardashian's 'Khlo-C-D' is so harmful". Scott is someone who battles OCD and shines a personal light on why Kardashian's terminology could be dangerous. She wrote,

Every time someone publicly links OCD with cleanliness and organization, they strengthen that stereotype, and make those struggling think that there's no way they can have OCD unless they’ve got a neatly arranged pencil case. If you don’t realize you may have OCD, it’s hard to get help. But KHLO-C-D doesn’t only reduce OCD to one symptom, focusing on an obsessive need to clean. It dismisses that serious obsession as a quirk. KHLO-C-D is simply about organization and cleanliness — not the obsessive thoughts behind it.

As many fans have pointed out, they love Kardashian's neatness and her organization tips, but she needs to make sure she's not offending anyone or trivializing OCD, a debilitating mental heath disorder, in the process.