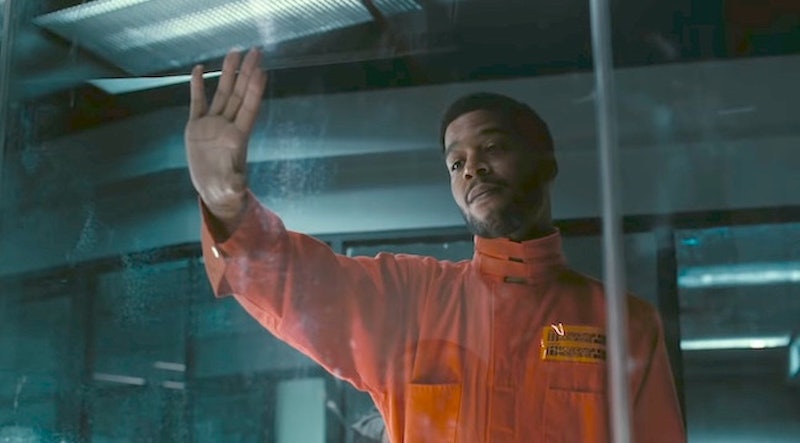 Caleb, a military veteran struggling to cope with his PTSD and adjust to an increasingly technology-driven world, spends the episode having various phone conversations with Francis, a fellow soldier. He appears to be one of the only people Caleb is close to, and thus one of the few he can genuinely confide in. Toward the very end of the episode, however, it's revealed that Francis is actually dead; Caleb was merely subscribed to some sort of technological counseling service that replicates Francis' voice and personality, so that he would feel like he was talking to his late friend. But the AI voice couldn't truly replicate Francis, leaving Caleb feeling just as empty as he would have been anyway.

This is similar to an episode from Black Mirror's second season called "Be Right Back," in which a woman named Martha becomes increasingly involved with a service that replicates her late partner Ash. The technology uses the deceased person's social media, blog posts, and other digital imprints to create an AI version of them, first via phone calls and texts, and then an actual physical replica. But as with Caleb, Martha's dependence on a fake version of the person she once loved eventually pushes her back into depression, and she decides to limit her interaction with him to only a few times a year.

This may be the case for Caleb, too. Though he ultimately decides to unsubscribe from the service, according to IMDb, Kid Cudi is also slated to be in the fifth episode of Season 3, and potentially more beyond that. Will his story get a happier ending than in Black Mirror? Knowing Westworld, that's unlikely.