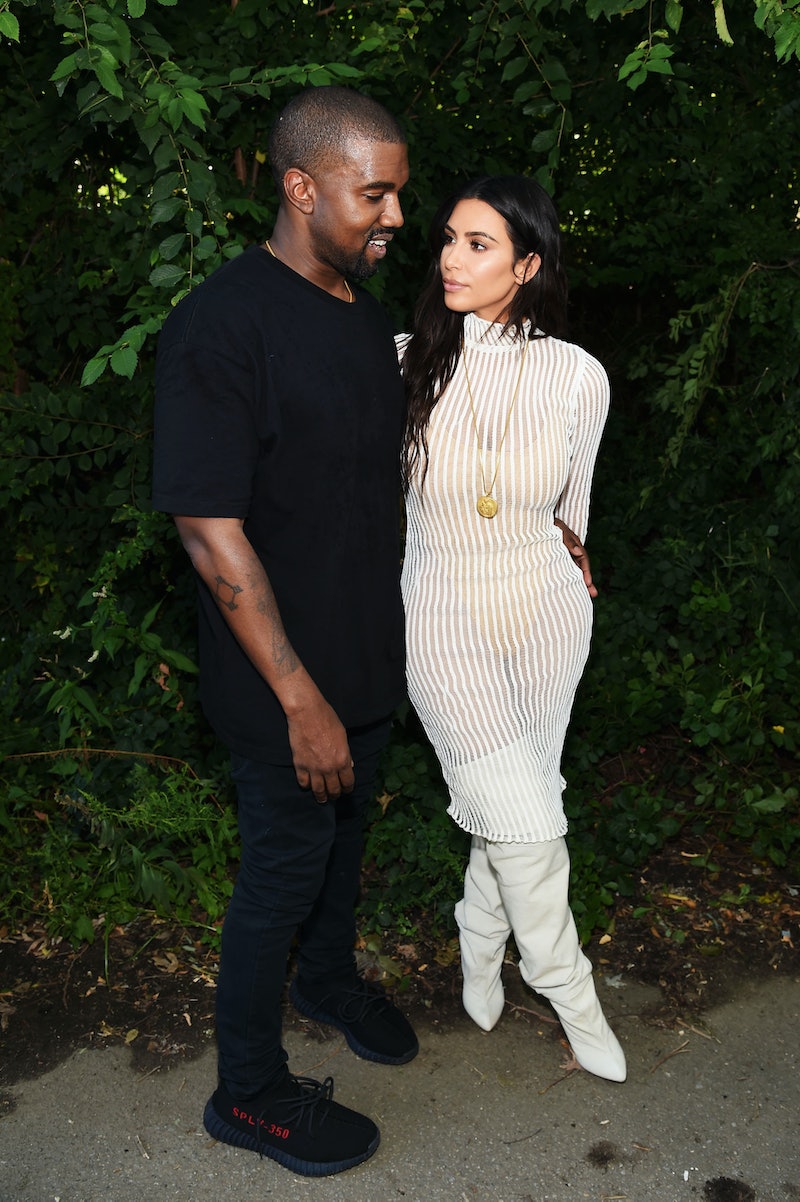 Having a partner handy doesn't just mean stealing each other's hoodies and using each other's skincare products when the other isn't looking — it also means swapping hair dos every now and again. Kim Kardashian and Kanye West switched hair colors, and it gave the world some major relationship goals.

Kimmy K has been on something of a hair adventure this past year, trying on different shades and cuts almost bi-monthly. During the fall she wowed the sartorial world by going an icy platinum color, but she soon found it to be a lot of maintenance. Not only did that amount of bleach damage her hair, but getting naturally dark locks that blonde took a lot of time and energy. This became especially apparent when Kardashian tweeted from her salon chair in December, sharing with the world that she has been stuck at her appointment for a whopping 13 hours to retouch her hair.

"Spent the last few days bleaching my roots (we do it in stages so it doesn't break off). OMG 13 hours & still going. This blonde is very high maintenance," she tweeted. She told Chris Appleton, her long-time stylist, that she loved him, but she was very much getting over all the work.

But that wasn't necessarily true — just a month later she shifted her hair color from a bright silver to an ashy grey with black roots, partly to change her look a little, and partly to better match the new Yeezy Season 6 line that she had been modeling all over L.A.

"We toned the hair ashy so it was fresh and it bounced back from her clothes so it looked blue,” Appleton told PeopleStyle. “I also used a lavender toning mousse by Color Wow to enhance the cool blonde.” Appleton called it "the new platinum," explaining that it was fun to find new reiterations of an in-vogue shade. But the KKW mogul didn't sport that ashy look for too long, opting to go a bubblegum pink just in time for her holiday trip to Tokyo with her sisters, Khloe and Kourtney. Which was very fitting, especially seeing how she shared that the pastel look was inspired by Japanese anime.

When a fan on Twitter wrote that she “literally looks like an anime character,” Kardashian responded "I am obsessed with anime. That was legit my inspo." When she returned back home from Tokyo, she hopped onto Instagram and shared a photo of Zero Two, the pink haired character from the series Darling in the Franxx, revealing her hair inspo.

But now that she's back to her usual brown locks, Kanye picked up the pink theme where she left it off. After celebrating Khloe's baby shower, Kim and Kanye packed up and headed to Wyoming for a ski weekend, where they debuted their new looks.

Kim teased their new hair colors on Snapchat, where she didn't post full-out selfies like she's prone to do, but instead shared snippets. For example, on Snapchat she took a photo of the snowy mountain tops with just a portion of Kanye's pink head in the shot, as if he got in the way of the picture at the last second.

She also shared a fuzzy photo of her reflection in a shop window, sporting dark locks. That's when people started realizing they swapped hues.

While in town fans took photos with the couple, which leaked the news of the hair swap even faster. Their pictures were captured by the Instagram account TeamKanyeDaily, which showed a better close up of West's pastel crop.

Maybe West wanted to try out the shade to play with some anime inspiration of his own — especially considering that Kardashian revealed Japan is one of West's favorite places to go and pull inspiration from. Or maybe he just thought the color was fun and out-of-the-box, and he wanted to try something new. Either way, the color swap has been amazing.