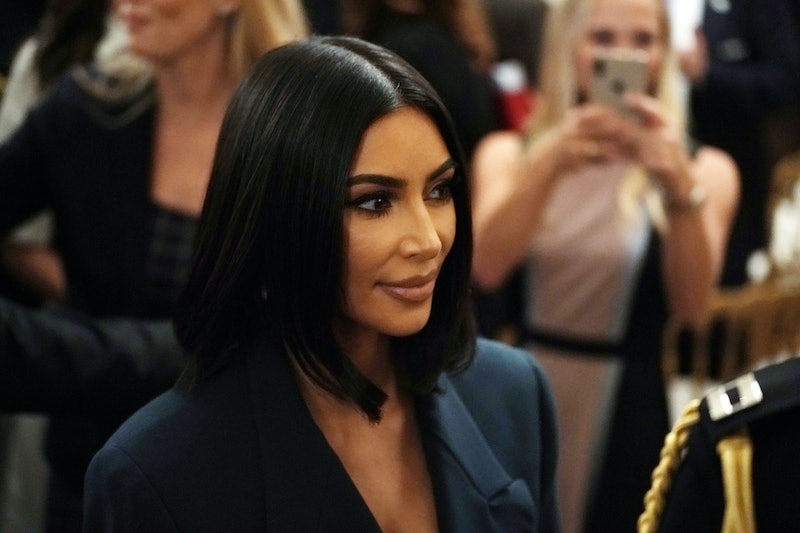 The lawyer-in-training was interviewed by her husband Kanye West for a Vogue Arabia feature. He asked her where she sees her life in ten years and she gave a pretty surprising answer. Kim shared, "In my mind I’m already living in those 10 years. I see us living on a ranch in Wyoming, occasionally going to Palm Springs and our home in Los Angeles — and becoming a lawyer."

It's unclear if this was the first time that Kanye heard about Kim's intent to relocate, but he hit her up with this very logical follow-up question: "Would you set up your practice in Wyoming and fly in and out to work on prison reform?"

Kim revealed, "I would probably do it from there and fly into DC, NY, and LA." If anyone can make that commute work, it's Kim Kardashian.

At another point in the interview, the rapper asked his wife, "What motivated you to start studying law? Did you choose law to feel closer to your father’s heritage?"

Kim's late father Robert Kardashian, Sr. was a lawyer, but he actually wasn't the reason Kim got into the field. She shared, "No, I’ve always been interested in law, in studying law. As I started to become interested in criminal justice reform, I felt the urge to learn more so that I could do more."

As influential as Kim has become, she recognized the limitations she has without a law degree. The mother of four recalled, "I knew that the only way I could help was if I was really educated on the laws and the system."

Even though her father is not the reason she decided to study law, Kim did admit, "But I know that my dad would love it, he would be so proud. He would totally be the one helping me study and would have taken the job of helping me with my flashcards away from you – he would have been so happy to do that." Aw. That is so sweet.

Obviously, Kanye is very supportive of his wife's studies, but she has also taken his preferences into account with her ten-year plan. Wyoming might seem like a pretty random place for the California-based family to relocate, but it does have the Yeezy seal of approval.

In Spring 2018, Kanye spent time in Jackson Hole, Wyoming recording music. And, of course, Kim and the kids made plenty of visits.

Kanye even premiered his album Ye with a listening party in Wyoming, which Kim, Scott Disick, Scooter Braun, Jonah Hill, Chris Rock, and other stars attended.

It may seem like an out of left field impulse for Kim to move to Wyoming, but Kanye has thrived there professionally and their family enjoys spending time there, so it might be the perfect place for the Wests to get some privacy.