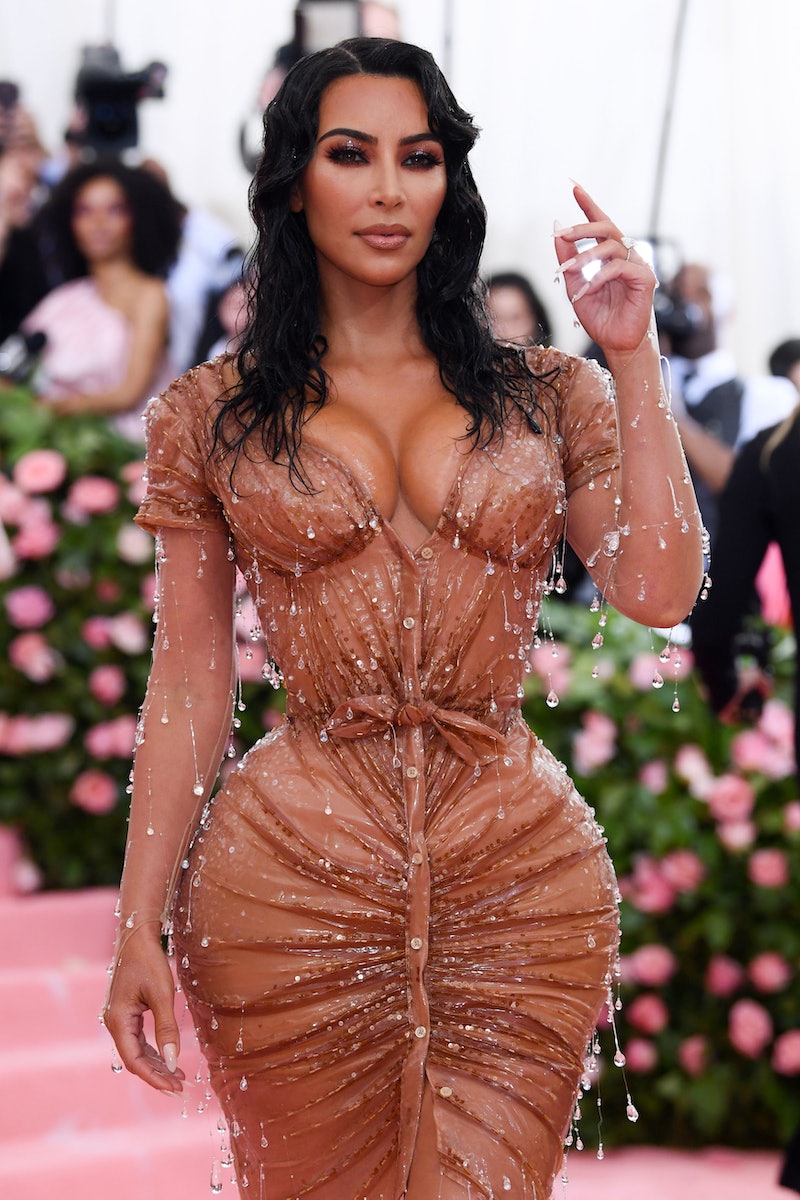 David Fisher/Shutterstock
By Kayla Greaves
May 7, 2019

With tonight being one of the most talked about night's in fashion, surely Kim Kardashian's 2019 Met Gala outfit would be one to make a statement.

This year, the reality TV star wore a short, latex Mugler dress with beading, paired with clear pumps. Her hair was styled into a wet and wavy look, which perfectly framed in face. In typical style, Kardashian didn't skimp when it came to her glam, sporting a shimmery, smokey eye look tonight, created by none other than Mario Dedivanovic using Tatcha and KKW Beauty products.

“This is the first time in 20 years Mr. Mugler has designed for the House of Mugler. So to come and design this gown for me is such an honor,” she told Vogue on the red carpet, according to People. “This is about eight months in the making. He envisioned me, this California girl, stepping out of the ocean, wet, dripping.”

At last year's event, which had a "Heavenly Bodies" theme, Kardashain wore a form-fitting, metallic gold Balmain gown, paired with two diamond cross necklaces. As per usual, the star went all out when it came to her makeup, rocking a bold, smokey eye, with sky-high lashes, her signature contour, and a creamy, nude lip. As for hair, Kardashian opted for a sleek, half-up half-down 'do.

With so much attention to detail when it came to 2018's look, one would think that Kim had her outfit sorted weeks in advance, but it turns out, it was actually a bit of a last minute scramble.

Sharing with Vanity Fair in May 2018 that she didn't actually try on the dress “until the night before," Kardashian was in a bit of a panic before hitting the red carpet. But thankfully, things ended up working out.

“We had gone through sketch after sketch, perfecting it," she said to the publication. "They took my measurements, but inside I was freaking out a little bit. Was it going to fit? I had lost six or seven pounds in the last two weeks, doing a cleanse, and so I really wanted to make sure that it fit me. So I was freaking out a little bit, and then it just fit me like a glove — like, it was perfection. It was so good.”

But despite her dress being a knockout that year, she also shared that it wasn't her favorite aspect of the night — it was actually a performance from Madonna that took the cake.

“I was, like, singing, like, monks were singing ‘Like a Prayer,' she detailed. "I mean, I saw her in concert so I’ve seen it. But in the Met, in a museum, with the monks. It was insane.”

Last year's fiasco aside, it seems as though the reality star was more than ready for her 2019 Met Gala debut. On the morning of May 6, Kardashian posted a photo of her unforgettable gold dress to her Instagram page with the caption, "Happy Met Monday!!!" And with her longtime makeup artist and business partner Mario Dedivanovic being one of the first time comment, saying, "Can’t wait see u soon," it's no wonder her entire look for tonight was a total hit.