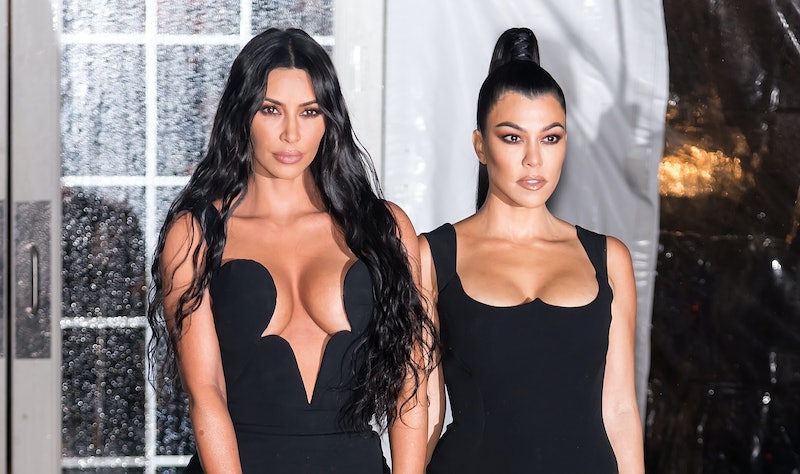 Keeping Up With the Kardashians can get so difficult at times that even the production crew needs a break. And, it turns out, that's exactly what happened behind the scenes of this most recent episode. Kim Kardashian's violent fight with Kourtney on KUWTK caused the show to halt production entirely for a week, as Kim revealed on a special at-home episode of The Tonight Show with Jimmy Fallon on Monday, Mar. 30.

As viewers witnessed on the now-iconic Season 18 premiere of KUWTK, Kim and Kourtney got into a huge fight that quickly escalated into full-blown slaps and punches, with Khloe and Kendall forced to watch the chaos go down. As Kim claimed to Fallon, the fight was the result of built-up resentment from Kourtney over having to film the show without giving an explanation as to why she wanted to stop.

"She's not the type of person to make a decision and say, 'OK guys, I'm not gonna film,' but she would come to work with an attitude every day, take it out on everyone from the crew to us and wouldn't really make that decision," she said. "So we'd just keep on pushing her to figure out why she was so unhappy."

She said that resorting to violence is not something that she ever intends to do, and when their mom Kris saw the clip, she cried. "She was like, 'Who are you guys? What is going on?' I think everyone was really shook for a minute and just was like, 'This isn't our type of show," Kim explained. "What's happening?' We want everyone to be comfortable and safe." Obviously, Kim forgot about her iconic "don't be f*cking rude" slamdown with Khloe, but we'll let it slide.

She also told Fallon that viewers didn't really see what spurred Kim to slap Kourtney multiple times. "She scratched me so hard, I was bleeding," she explained. "You didn't really get to see that detail, but when I looked down at my arm, I saw that she had really scratched me and I felt it all on my back, I just went over and slapped her back. It's not my proudest moment but we were going through it."

Loyal KUWTK viewers know that tensions between Kim and Kourtney have been building for quite some time. Much of Season 17 was focused on Kourtney wanting to spend less time filming, resulting in many arguments between the sisters about her perceived lack of work ethic, with Kim once even calling Kourtney "the least interesting" sister to look at.

Now, Kim said the two of them are completely fine now, with Kourtney's decision to take time off being beneficial for everyone. "I think she really needs it," she said. "I think that'll be so much better for her." But for our sakes, let's hope she's not gone for too long.