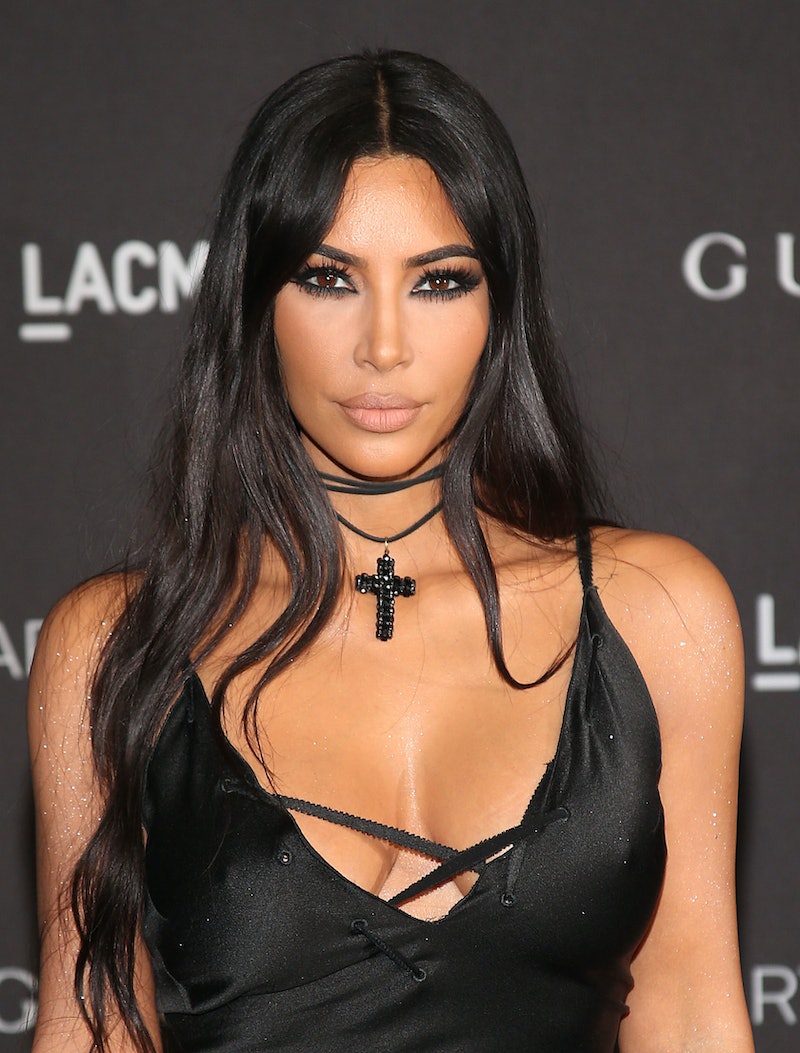 For many people, sibling rivalry can be all too real, no matter how old you are. And as Kim Kardashian hilariously documented in her latest Instagram post, her three kids don't always get along. Kim Kardashian acknowledged North's attitude in the funniest way, writing in an Instagram caption that her and Kanye West's oldest child "is always a mood."

Kim's picture shows her and her three children, and she's smiling slightly at the camera. None of the kids looks as happy as she does, though. Saint is looking away from the camera and trying to lie down, and Chicago is staring at the camera wide-eyed. But North takes the cake in the photo, giving the photographer what can only be described as a withering glare. In fact, according to Life and Style, Kim's original caption was "My babies," but she reportedly changed it after fans pointed out how funny North's expression is.

What makes Kim's latest Instagram photo and caption even more entertaining is the fact that that this isn't the first time she's hinted that North isn't a fan of at least one of her siblings. In August 2017, Kim said during an appearance on Live with Kelly and Ryan that North "does not like her brother." Yes, those were the Keeping up with the Kardashians star's exact words about her first two children — ouch.

"I don't know if it's because she's the older sister. I don't know what it is. I thought it was a phase," Kim said on the show at the time. "She does not like her brother, and it's so hard for me."

Kim explained to the hosts that North was "jealous" of the time she spent breastfeeding Saint. She also said that her older daughter tried to get out of playing with her brother by saying there were "no boys allowed." (To be fair, though, what older sibling hasn't tried similar tactics?)

Of course, North West is only 5 years old, so it's too early to speculate about what her relationship with her siblings will be like as they get older. While sibling rivalry is definitely a thing, it's way too soon to guess what this trio's dynamic will be like.

Plus, as the oldest of six siblings herself, Kim knows how complicated sibling relationships can be. Having brothers and sisters can be a blessing — and give you built-in friends who are with you pretty much all the time — but it can also lead to plenty of disagreements. And since North did have her parents to herself at first, it's understandable why she might have been skeptical to accept her younger brother into the family, at least in the beginning.

Kim's complicated relationships with her own siblings might be part of the reason why she finds North's attitude so amusing in the first place. North, Saint, and Chicago will probably look back on photos like this one and laugh about it when they're older, but it's still pretty funny for now.