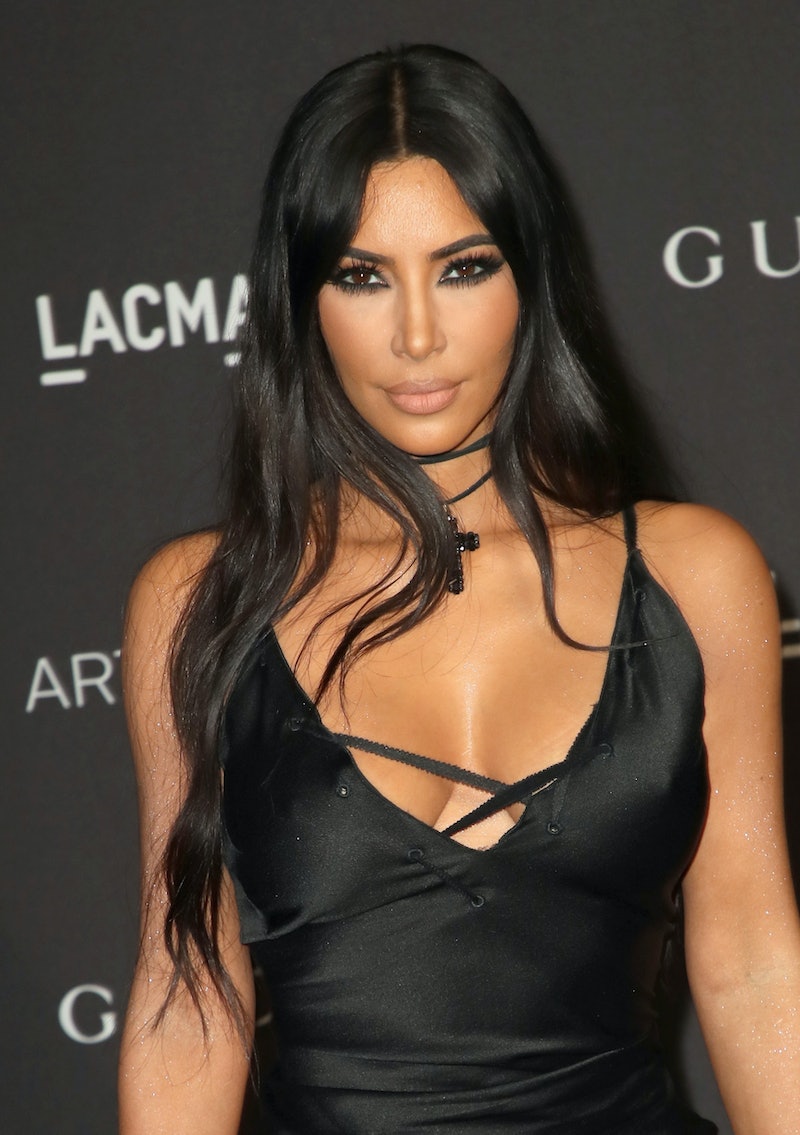 The Kardashian family knows how to throw a fabulous party. In case you weren't aware of that undeniable fact already, the photos Kim Kardashian posted from Chicago West's first birthday definitely prove that because the bash was nothing short of, well, wonderful.

On Jan. 29, Kardashian posted numerous pics on Instagram from the adorable party, which had its very own take on Alice in Wonderland. The Keeping Up With the Kardashians star revealed that the fam threw baby Chicago an "Alice in 'One'derland" themed party to celebrate her first birthday, which fell on Jan. 15. She captioned the set of photos:

Naturally, Kardashian went all-out for her little one's first birthday party, as all of her photos from the event showcase. In the snaps, Chicago can be seen in her custom gown fit for "One"derland as she poses with her mom and some familiar characters from the classic story, including Alice, the Mad Hatter (holding a plush Cheshire Cat), and the Queen of Hearts. Chicago didn't just get a visit from some Alice in Wonderland faves though, the family's house was transformed with garden fixtures galore.

Previously, a source revealed some behind-the-scenes info about the party, per E! News. In an article published on Jan. 19, the insider said, "Kim went all out for Chicago's party and changed her house into a Disneyland/Alice & Wonderland theme. The decor is extreme and she's really excited about it," and continued, "Kim wanted all of the cousins to dress in theme and Chicago has her own custom costume."

E! News also highlighted some of the other fun aspects of Chicago's birthday party. Apparently, there was a table set-up for the kids to have their own little tea party (hopefully, with no interruptions from the Mad Hatter) and some arts and crafts to get into the Wonderland spirit. And the Kardashian family definitely got into all the fun. In one snap from the event, True Thompson and Khloé Kardashian posed for the camera in a fun snap taken by North West herself. Still, these weren't the only exciting details about the party. A source continued to say:

"The inside was designed like an outdoor garden with faux grass, red roses and a fun maze for the kids to run through. Outside they had a bounce house and Alice characters to entertain the kids. The characters had a tea party with the kids and played chess with giant chess pieces. They read them stories and helped them at a Mad Hatter station where they could make different hats and headbands."

As you'll recall, on Chicago's actual birthday (Jan. 15), Kardashian took to Instagram to share a special message in honor of her daughter's big milestone. She posted a super cute photo of her little one and wrote:

"Happy Birthday to my pretty girl Chi!!!! The sweetest baby in the whole world! Mommy and Daddy love you so much!"

It's clear that the whole family had a ton of fun getting lost in "One"derland during Chicago's very merry birthday party.