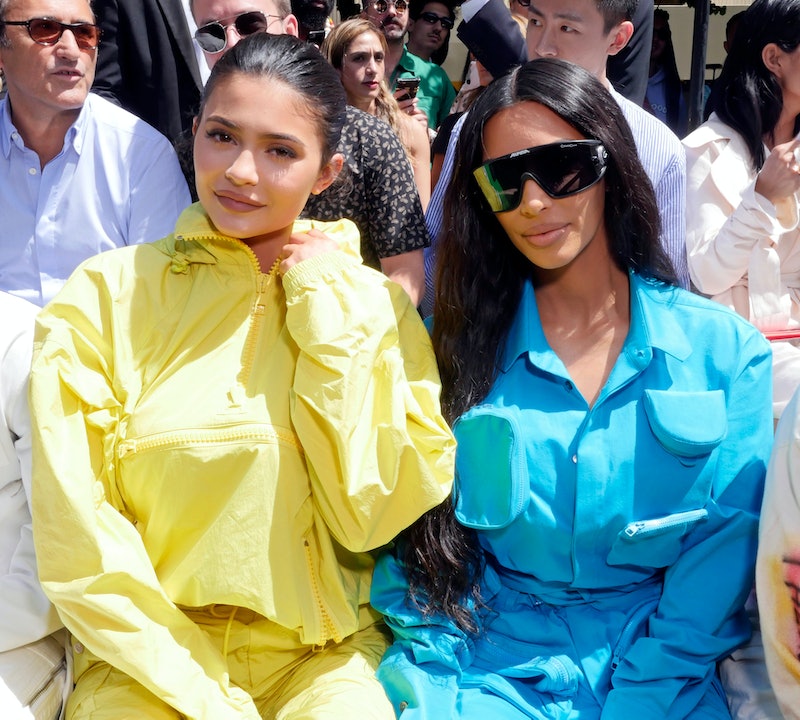 There’s no denying that the KarJenner family has an immense sense of style. However, when two sisters dress alike, fans wonder who initially inspired the look. Take Kim Kardashian and Kylie Jenner’s 2019 Met Gala after-party outfits for example. The sisters both rocked electric aqua and the outfits are imitation in its finest form.

The ending of the Met Gala didn’t stop Hollywood royalty from turning looks for the after party. After Kylie donned head-to-toe purple and Kim rocked a trippy (and drippy) nude hip-hugging dress, the two stepped out in even more campy looks for post-Met festivities.

Kim wore a latex baby blue mini dress that featured a belly-button deep V-neck and mesh covering over her stomach. To top off the look, she wore a very Cher-inspired beaded hair look with beads even cascading into bangs. The Keeping Up With the Kardashians star continued the holographic latex blue in her outfit with detached sleeves and a pair of knee-high boots. Kardashian revealed on her Instagram on May 7 that the after party dress was also designed by Mugler, the creator of her actual Met Gala dress.

Kyle also didn’t stray too far away from her Met outfit in her after party look. Kylie switched from purple to turquois blue in a beautiful see-through sequin gown. The dress featured a shimmery bodice with cut-outs to separate it from the gown’s glittery see-through skirt. Plus, she changed her wig and feathers to the same color as her aquamarine dress.

One color. Two earth-shattering looks for an after party to celebrate fashion.

The 2019 Met Gala theme honored camp and both Kim and Kylie attended, interpreting the concept in two very different ways.

Kylie dressed up in feathers earlier that night wearing a custom Versace gown in lavender with a wig to match in the same bright hue.

The showgirls-inspired gown was held together by Kylie's nude corset bodysuit with purple chains making up most of the dress and transitioned into a small feathery train on the bottom.

Remaining consistent with the dress' feathery theme, Kylie paired it with two giant purple arm pieces made of the same material as the base of her feathered gown.

"I can't breathe a little bit, but I feel good," Kylie told E! on the carpet.

Trust and believe that Kylie's service is very much appreciated.

Kim sported her go-to color at the Met in a form-fitting and faux-dripping nude Mugler dress. According to People, the dress took eight months to design for the occasion.

“This is about eight months in the making," Kardashian told Vogue on the red carpet. "He envisioned me this California girl stepping out of the ocean, wet, dripping.”

From afar, the gown looks like any short-sleeved mini dress, but in actuality, it features see-through sleeves that turn into gloves on Kim, keeping all the droplet details attached to Kardashian's arms.

Regardless of how these two stylish sisters rock the same color, their looks will almost always knock your wig off for two very different reasons.