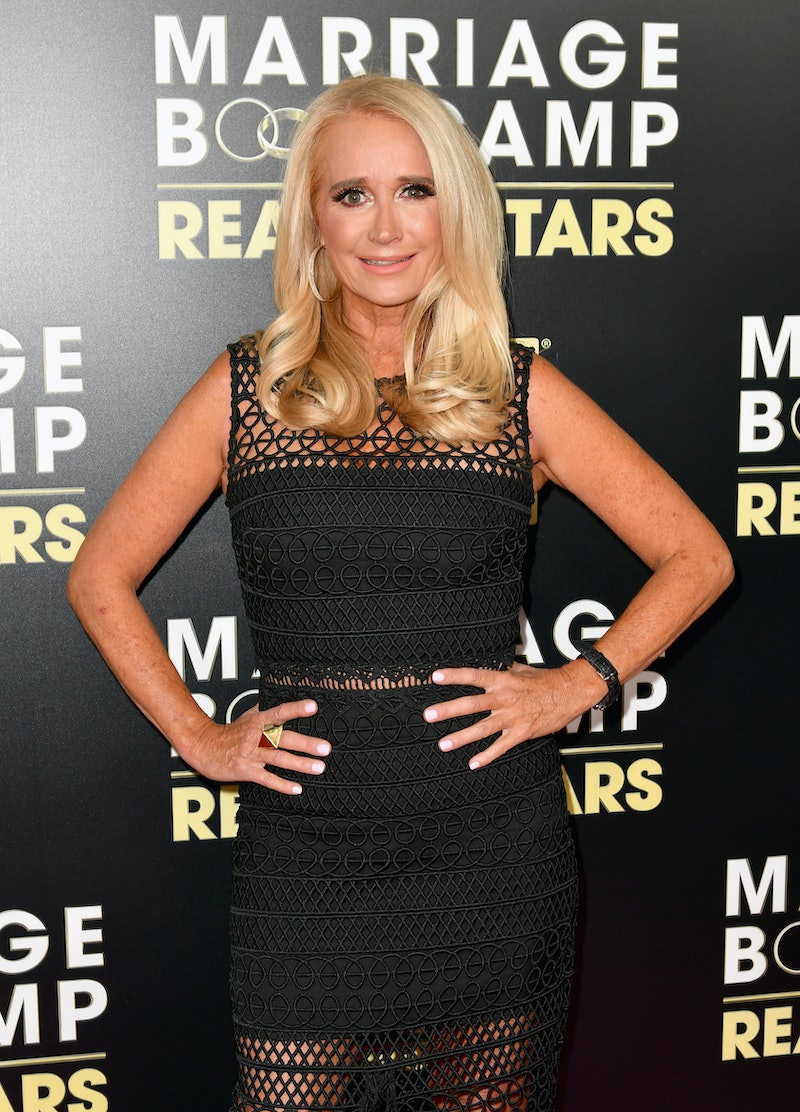 Real Housewives of Beverly Hills fans have Kim Richards to thank for getting the show off to an iconic start. Even though she isn't a cast member, she will always be considered a Real Housewife of Beverly Hills. Plus, she does make cameo appearances sometimes. Aside from those though, updates about Kim Richards in 2019 show that she's really living her best life.

It's tough for some reality TV stars to give up the spotlight, but it seems like taking a break from Real Housewives of Beverly Hills was the best move for Kim. She gets to show up for some events without enduring a whole season's worth of drama, and frankly, she should consider herself lucky to have escaped the constant dog chatter. But she did film a little bit with the ladies this year.

Even though Kim is not down to be a full-time reality TV star again, Kim did appear on Marriage Boot Camp: Reality Stars for the Lovers & Liars edition with then-boyfriend Wynn Katz in 2018. The two of them split for good during the season finale, but Kim isn't letting that keep her down.

Kim discussed the possibility of an RHOBH return in an August 2018 interview with People. The Beverly Hills OG admitted, "I didn’t say that I wouldn’t [come back], I’m just saying I don’t miss the drama and arguing." Fair enough. Who would?

Overall, Kim is very content with her camera-free life. Kim told People, "Right now, I’m really at a peaceful place in my life, being a mom and a grandmother."

Kim emphasized, "It’s just so amazing for me. I like not having the negativity, being at peace, waking up in the morning and going to watch my grandson or having him for a week. I’m super grateful for that." Plus, Kim is getting ready for her second grandchild. On Thanksgiving 2018, Kim's daughter Brooke Wiederhorn announced she is expecting a baby boy on Instagram.

In addition to the joy of being a grandmother, Kim is spending time with other relatives Kim's sisters Kyle Richards and Kathy Hilton attended Brooke's baby shower for baby number two in March 2018. Kyle and Kathy's daughters were at the shower as well.

Sure, it seems like a given that Kim's sisters would attend her daughter's baby shower. However, the RHOBH fans know that the trio hasn't always gotten along. Nevertheless, Kim shared some good news in an August interview with Entertainment Tonight. Kim said,

"I'm good with both my sisters today. I have a great relationship with both of them. Family is important and I just didn't think there's a reason for anybody or anything to get in the way of it, so we're all good."

It seems like the sisters are truly in a good place this time around. There haven't been any rumblings of family drama in a long time.

Aside from hanging out with Kyle, the other RHOBH cast member that Kim seems to be close with is fellow alum Brandi Glanville. In fact, in February, Brandi tweeted that Kim has a book in the works. This isn't something that Kim has confirmed herself, but it let's just hope it's true.

Kim spending her time focusing on the people who are important to her. She is a happy mother, grandmother, and sister, which is more important than being a Real Housewife of Beverly Hills. However, a Kim Richards appearance is always a highlight and the fans would welcome a full-time return. Kim summed it up best with her Season 4 tagline, "Everybody loves a comeback story, especially starring me."