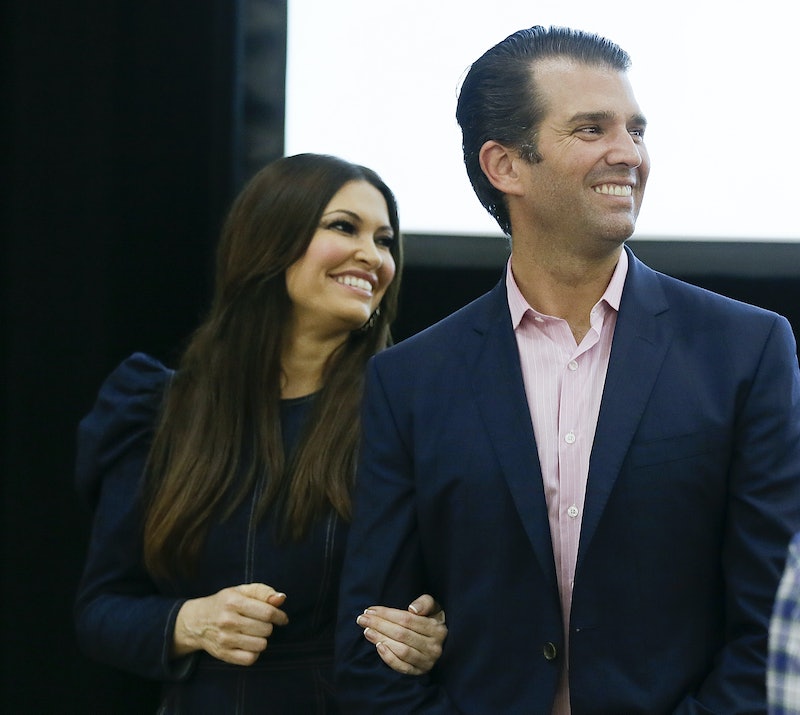 It’s the last day of the year, which also means it’s Donald Trump Jr.’s birthday. He celebrated with girlfriend Kimberly Guilfoyle, who wished him a happy birthday on Instagram and Twitter. Guilfoyle also shared a photo of them and his birthday dessert, which had his name written in what appears to be chocolate.

“Happy Birthday to my best friend and amazing boyfriend @donaldjtrumpjr it’s been wonderful spending the holidays and your birthday together,” Guilfoyle wrote on Instagram on Monday. "Here's to an incredible 2019! ♥️🥰💕🇺🇸🙏XO Kimberly.”

The pair began dating in April 2018, but have known each other for at least a decade, according to Town & Country. Don Jr. and Vanessa Trump — a former actress and model and mother of the eldest Trump's five children — filed for divorce in March, according to USA Today.

But Vanessa has defended the couple online. In June 2018, Vanessa said she and her estranged husband were working on raising their children when critics questioned Guilfoyle's then-employment at Fox News while she dated Don Jr. "The lengths people will go to attack a woman simply because she’s dating Don," Vanessa tweeted in June. "We've been separated for over nine months and respect each other’s decisions & privacy. We’ll focus on raising our great kids. Would be nice if the press did the same rather than obsess over our (private) lives!"

In 2017, Don Jr. had a birthday party for his 40th in mid-December at a Dallas restaurant, according to Time. And one of his friends brought along a chocolate chip cookie cake decorated with frosting in the style of the infamous Obama "Hope" poster created by artist Shepard Fairey in 2008.

Don Jr. posed with the decorated chocolate chip cookie cake along with Republican Texas Sen. Ted Cruz and other friends. "With friends like these... some good friends decided that while my birthday is not for 2 weeks that they would get me an early 40th birthday cake. And what birthday is complete without an Obama cake? I figured it was so good that I would have to share it with Ted. 😂🇺🇸😂🇺🇸😂 #tx #texas #birthday #tedcruz#obama #cake," Don Jr. posted on Instagram in December 2017 to describe the cookie decorated with what looked like the former president's face.

On Twitter, Don Jr. shared a Daily Caller slideshow showcasing what the publication deemed his "pretty fire" Instagram posts to celebrate turning 41. It's unclear if Don. Jr. will be attending the annual Mar-a-Lago New Year's eve bash to continue celebrating his 41st birthday, which he's attended in the past.

This year, President Donald Trump's soon-to-be acting chief of staff said the president will not be attending the party in Florida as the president will be monitoring the government shutdown which began before Christmas. Instead, the Daily Mail reported that Trump gave an interview to Fox News that will be aired during the network's New Year's Eve coverage.

But it looks like the party will still go on, according to the Palm Beach Post, so perhaps Don Jr. will get to continue the celebration.