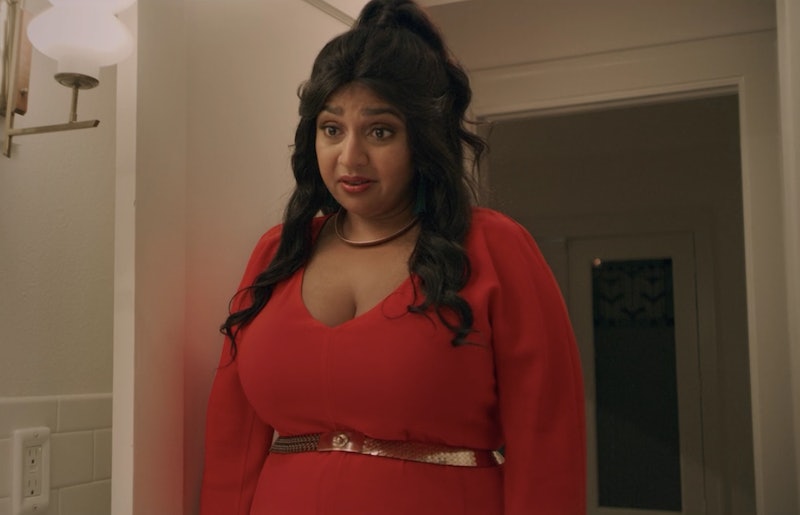 Spoilers ahead for Season 1 of Special. As a show comprised of only eight 15-minute episodes, Netflix's Special makes every moment count. The first season is a frank (and funny) examination of Ryan O'Connell's life as a gay man with cerebral palsy, but it also creates space for people with other marginalized identities — in particular, Ryan's friend Kim, a plus-size woman of color. Her experience isn't given nearly as much screen time as Ryan's — it is, after all, his story — but she does give an emotional speech that will resonate with anyone who's felt like they had to work overtime just to belong.

In Episode 4, Ryan decides to throw a small housewarming party to celebrate moving out of his mother's house for the first time. The friends he invited ditch him at the last minute, so he asks Kim to come over instead. Initially, he pretends like he set up the whole thing for her, but it doesn't take long for her to catch on. He breaks down and admits he feels like a loser, and Kim empathizes — she knows what it's like to feel rejected just for being who she is.

"I'm broke. Ta-da. You can't afford this sh*t on a blogger's salary," she confesses. "Look, I love clothes and looking glam and hashtag-goals, all the time, trust. But sometimes I just feel like as a non-skinny, non-white girl, I've gotta work overtime. Like, 'hey, I'm a voluptuous brown girl, but, I'm wearing a $448 dress and I got a blowout, so I'm safe! Accept me!' It's exhausting, and expensive. I'm in so much debt."

This is definitely unexpected for Ryan — since meeting Kim, he's seen her as a woman who has it all. She's a pro at writing viral content, has killer fashion sense, and always seems confident and put-together. But there's a reason for that: she quite deliberately and tirelessly presents herself that way. Because to her, that's the only way to even the playing field in a world that has always made her feel less than.

Case in point: while at a pool party in Episode 2, Kim encounters two thin, white women who love her body positive writing. They spend the day praising and catering to her, but when they finally explain why, exactly, they relate to her, she only feels more invisible and misunderstood. "Reading about somebody like you finding stuff to love about your body? Clearly we have no excuse. If you can do it, so can we," they tell her, ignorant to the fact that they've just subtly body-shamed her.

Kim and Ryan are dealing with completely different things, but they've both felt like they had to hide or downplay certain parts of themselves just to fit in. Everyone puts that "Valencia filter" on their lives, as Kim says, but that goes doubly so for those that society has historically "othered", like fat women, people of color, the LGBTQ community, or people with disabilities. Hopefully, shows like Special will help to change that — but at that very least, Kim's speech should make them feel a little less alone.