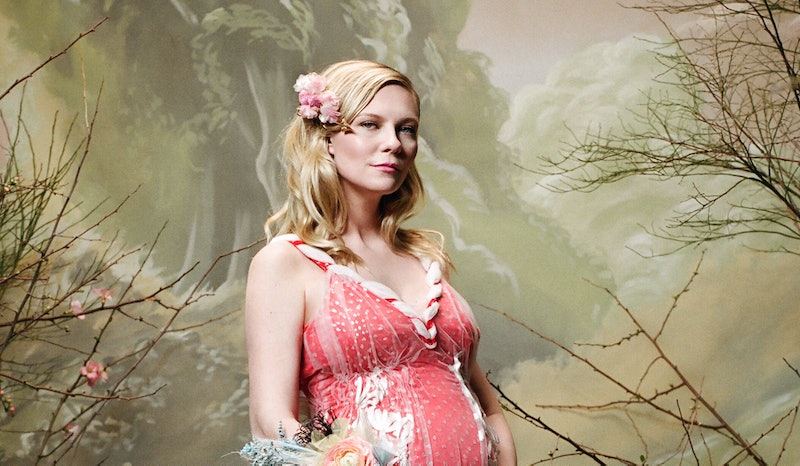 Kylie Jenner might not have given her fans the slightest hint about her rumored baby, but other celebrities are here to make up for it. As E! News initially reported, Kirsten Dunst announced her pregnancy in a Rodarte campaign. The gorgeous floral-centered fashion campaign comes after months of pregnancy rumors and adds to the list of unconventional announcements.

This is anything but your typical Instagram pregnancy announcement. Beyoncé might have stunned the world with her artfully constructed social media post, but Dunst is taking it one step further. The actress and fiancé Jesse Plemons are officially expecting their first child together, and she made the announcement in Rodarte's Fall Winter 2018 look book.

There was no fancy-worded announcement. Just two photos of Dunst wearing the brand's clothing and holding her baby bump. The actress is standing in front of a gorgeous floral backdrop wearing a jacker with a giant bow in the front and a flower in her hair in the first image and a pink and white lace gown. According to the brand, the photos are for the Rodarte portrait series that features 12 other models.

"We are thrilled to feature women who inspire us in our fall winter 2018 portrait series," Kate and Laura Mulleavy said in a press release.

The actress hasn't posted the images to her social media pages, as of Jan. 30, but, according to previous Bustle coverage, the news wasn't exactly shocking. Dunst has hinted that she was ready to be a mother as of recently and has been giving clues for some time now.

"I'm at a stage in my life where I'm like, 'I've been working since I was 3. It's time to have babies and chill.' You know what I mean?," Dunst said in an interview with Marie Claire U.K. "I wasn't one of those 'I need a baby!' people until my goddaughter was born. I love her so much. That love is just like...You can't experience that unless you have a kid. I put her to bed last night and she woke up this morning and said to her mom, 'Where's Kiki?' I just love that love. That's what I want."

Dunst and Plemons announced their engagement in January 2017. They have both kept the relationship out of the public eye, so the somewhat-secretive pregnancy isn't all that shocking. The two played a married couple on the show Fargo before they got engaged themselves.

As for the Rodarte announcement, there is no word on when you will be able to stock up on the gorgeous designs. According to a press release, the photos were shot by Autumn de Wilde, styled by Shirley Kurata and Ashley Furnival, and flowers are from Joseph Free.

Of course, besides it just being a stunning image, the announcement adds another layer of excitement to the typical look book.

According to People, Dunst is very close to the sisters behind Rodarte. The publication reports that Kate and Laura Mulleavy have been working to make Dunst's wedding dress, so it only makes sense that she would chose their brand to announce this milestone, too.

"I think we've actually only done a handful of wedding dresses in our career, and we've only done them for people that we're really close with because it's an emotional thing you know when you wear it to get married," Kate revealed to People. "It's just a magical thing to create that's kind of going to be exciting."

There is no word on when Dunst due date is or when she plans to wed. But congrats are definitely in order.