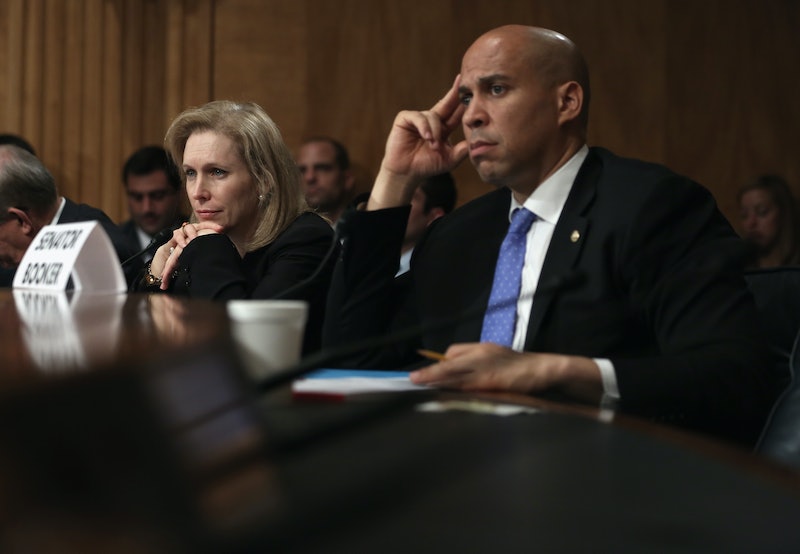 They may be running against each other, but don't let that fool you: Sens. Kirsten Gillibrand and Cory Booker say their 2020 bids for the Democratic presidential nomination won't get in the way of their friendship. The two senators have formed a warm personal relationship during their years serving together, and both made clear on Friday that they'll still be close despite being rivals for the presidency.

"Congratulations and welcome to the race to one of my closest friends, @corybooker!," Gillibrand tweeted after Booker announced his campaign for the presidency. "I'll be cheering you on—just, you know, not TOO hard." She attached an eight-minute video of she and Booker casually interviewing each other for Marie Claire.

"Huge smile!," Booker tweeted in response. "Kirsten, I am glad we are both in. As I told folks today on The View: You are my sister. There may be some sibling rivalry but we will always be family."

Gillibrand was appointed to fill Hillary Clinton's Senate seat in 2009 and has easily won re-election ever since. She announced on Jan. 15 that she will form an exploratory committee to run for president. Booker served two terms as mayor of Newark before being elected to the Senate in 2013.

During their time in the Senate together, Booker and Gillibrand have worked on several pieces of legislation together, including bills that would decriminalize medical marijuana and facilitate investment in small manufacturing businesses.

With his announcement Friday, Booker became the fourth Democratic senator to either declare their candidacy or form an exploratory committee to run for the presidency, alongside Gillibrand and Sens. Kamala Harris and Elizabeth Warren. Reps. Tulsi Gabbard and John Delaney have also thrown their hats in the ring, as have South Bend Mayor Pete Buttigieg and former San Antonio Mayor Julián Castro.

In addition to the aforementioned candidates, former Vice President Joe Biden, Sen. Bernie Sanders and former Rep. Beto O'Rourke are all believed to be considering runs, although none of them have made any announcements yet. Biden and Sanders have consistently placed at the top of Democratic primary polls, but it's worth stressing that polls have little predictive value this early in a cycle.

In their video for Marie Claire, Booker opened up by saying that he's "one of [Gillibrand's] best friends in Washington," which Gillibrand responded was a "true fact." The two then proceeded to quiz one another on their respective biographies, and appeared to be having a great time while doing it.

"It's not exactly the dating game, because we never dated," Gillibrand said.

"Now, don't get me in trouble with your husband," Booker replied, laughing.

The two talked about their friendship in the video, reminiscing about a trip they took together as senators to the Middle East and praising each other's books.

"I listened to your book on book tape," Booker replied. "But you literally dug into my book."