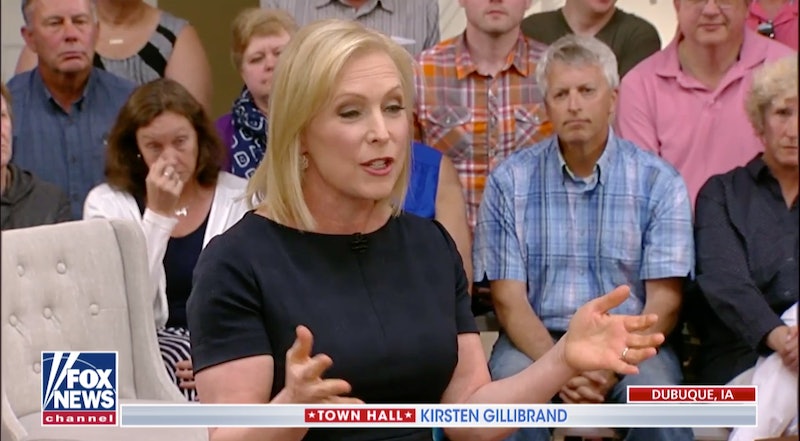 The New York senator running for president "has never been afraid to go into the ‘lion’s den,’" a promo video made by her presidential campaign said in advance of her town hall on conservative cable news. On Sunday she proved it. Sen. Kirsten Gillibrand criticized Fox News' abortion coverage and went toe-to-toe with the network's Chris Wallace on a number of progressive topics, Politico reports. These are some of the key moments from the hour-long program.

Many topics focused on women. "I am the leading presidential candidate on women’s rights today," Gillibrand told the crowd, underlining her argument to voters that had gathered in person in Dubuque, Iowa. In addition to abortion and reproductive rights, she went back and forth with Wallace over women's representation in Congress, her plan for a national paid family leave program, and universal pre-kindergarten.

Gillibrand had plenty at stake in her appearance, namely her need to draw more donors to her campaign. Having at least 65,000 individual donors is necessary, per DNC rules, to appear at the first two Democratic debates. She has not hit that mark and called on supporters to donate to the campaign during the town hall.

These are some of the moments that are key to understanding her appearance in the "lion's den." The clips show she did not hold back and brought her pro-women campaign to Fox News' viewers.