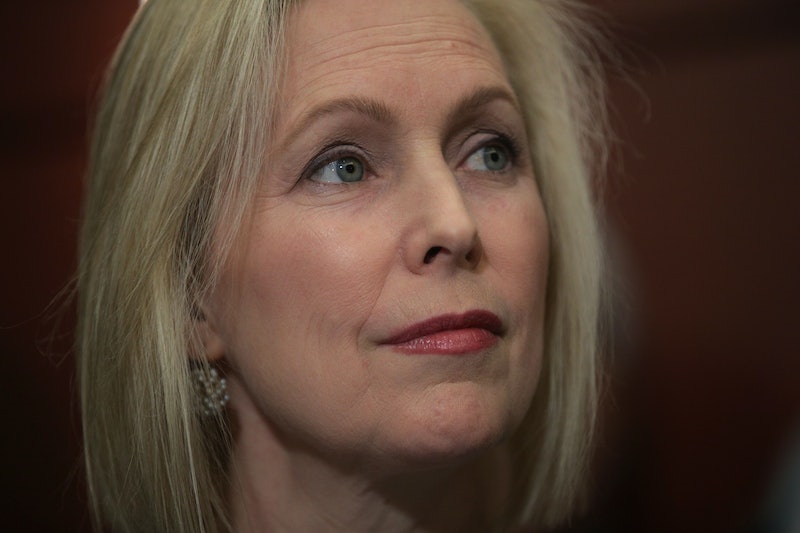 In this op-ed, writer Lux Alptraum explains how Kirsten Gillibrand dropping out of the presidential race shows that women are still being punished for men’s bad behavior.

On Wednesday evening, Sen. Kirsten Gillibrand announced that she would be discontinuing her campaign for the presidency. “I know this isn’t the result we wanted,” Gillibrand said in a video released on Twitter. “But it’s important to know when it’s not your time, and to know how you can best serve your community and country. I believe I can best serve by helping to unite us to beat Donald Trump in 2020.”

The announcement wasn’t particularly surprising, since Gillibrand has struggled to attract the same levels of attention and funding as her opponents over the past few months. As the September debate drew closer with no major shift in support for her campaign, it seemed inevitable that Gillibrand would drop out.

And yet it still felt shocking to see a woman who’d long been viewed as a prominent voice and leader within her party fail to achieve support for her presidential ambitions. Just two years ago, the senator was making headlines thanks to her unparalleled opposition to President Trump’s nominees. While her Democratic colleagues accommodated many of the president’s picks, Gillibrand approved just 9% of Trump’s nominees (fellow presidential candidates Elizabeth Warren, Cory Booker, Kamala Harris, and Bernie Sanders approved 13, 15, 19, and 19% of Trump’s picks, respectively.)

Gillibrand’s boldness hasn’t been limited to her opposition to Trump, either. As a senator, she supported marriage equality before many of her peers, and her support for trans people has been vocal and visible. While on the campaign trail, she spoke eloquently about how white privilege functions and called for the legalization of marijuana. Of course, she’s also been a fierce advocate for the rights of sexual assault survivors, taking pains to highlight the struggles of survivors in the military and on college campuses.

Even with that track record, Gillibrand has largely been seen as an underwhelming candidate, with the press writing her off as uninspiring and dismissing her failure to connect with the electorate as purely a function of her own shortcomings. So how did a woman at the forefront of the opposition to Trump wind up in this position? How did a bold, unyielding champion of equality find herself falling behind candidates like Pete Buttigieg, Beto O’Rourke, and Andrew Yang, who can’t hold a candle to her accomplishments in office?

Sadly, it would seem that the very passion and commitment to change that brought Gillibrand into the spotlight to begin with are at least partly to blame for her campaign’s failure to launch. The conventional wisdom goes that, by publicly siding with the numerous women who accused her former colleague Al Franken of sexual harassment, thus standing up for her belief that powerful men should be held accountable for their actions, Gillibrand alienated major Democratic donors. Undoubtedly, there are people who chose to pin Franken’s downfall on the woman who held him accountable rather than on Franken himself — a conflict that managed to drown out coverage of Gillibrand’s platform and beliefs.

While the press published glowing profiles of many of her opponents, coverage of Gillibrand, her platform, and her stances was notably muted, with little attention paid to what she stands for or why voters should care. Coverage of her role in Franken’s resignation, however, persists. In July, The New Yorker ran a sympathetic profile of the former senator in which Gillibrand’s name appears 24 times, and not because the writer appreciated her defense of the eight women who accused Franken of groping or trying to forcibly kiss them.

From the very beginning, Gillibrand’s presidential campaign centered on women’s rights, arguing that reproductive justice, sexual assault, and equal pay are all issues worth paying attention to. That such a campaign didn’t take her further in this presidential race is a sign of how far we still have to go when it comes to many of those issues. It’s clear that in 2019, women like Gillibrand are still being judged for taking a stand against men accused of harassment and not on their own merits.

More like this
Are John Legend & Kanye West Still Friends? The Singer’s Latest Update Is Candid
By Brad Witter
The 5 Best Underwear For Preventing Wedgies
By Lisa Fogarty
Beyoncé & Madonna’s “Break My Soul” Remix Honors A Group Of Black Icons
By Stephanie Topacio Long
'Scream’s Courteney Cox Has Broken A Major Horror Record
By Sophie McEvoy
Get Even More From Bustle — Sign Up For The Newsletter