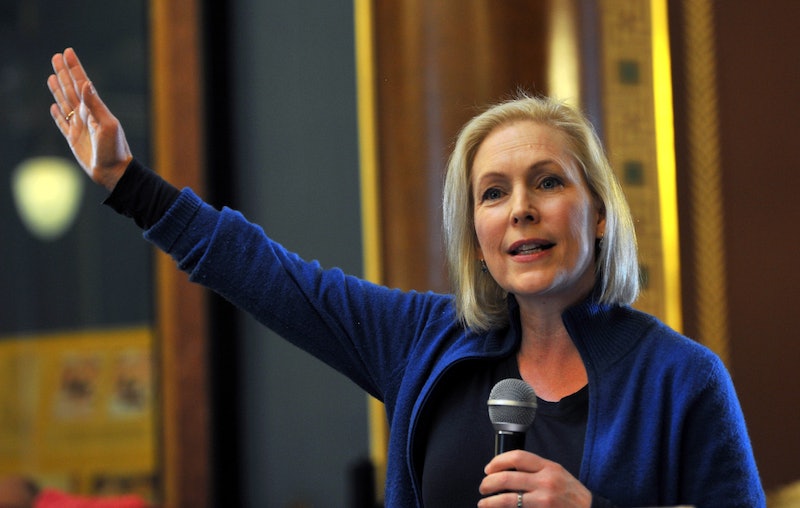 American Civil Liberties Union of New Hampshire organizer Palana Belken, who is also a trans woman, asked the question during an LGBTQ rights meeting, CBS News reported. In New Hampshire, a state lawmaker has introduced two bills for third gender markers in the Granite State, according to CBS.

New Hampshire state Rep. Gerri Cannon introduced the state bills. As one of two transgender women elected to the legislature, Cannon said she knows the importance of unified documentation. "Right now, especially non-binary people, when they go to one state to another some state trooper may take a look at a license with an 'X' on it and go, 'What is this?'" Cannon told CBS News.

Cannon posted about Gillibrand's visit on Twitter. "It was great to Have Senator Gilabrand [sic] in Somersworth today. A real impressive Candidate!" Cannon tweeted on Friday night.

While supporting the third gender marker, The Associated Press reported that Gillibrand said she would also advocate for transgender rights more broadly. She called President Trump's anti-trans policies like the military service ban "an outrage," according to the AP.

While no third gender marker exists on a federal level, numerous states have instituted their own use of an "X" as a gender marker. CBS News reported that Maine started offering an "X" option back in June 2018, starting with stickers for those who signed up for the third option. Permanent licenses can be printed with either M, F, or X starting in June 2019, according to CBS News.

In January, California started issuing identification cards such as driver's licenses with a "X" option, according to The Guardian. "I'm glad that finally non-binary people are recognized, that we exist," one of the first people in line to get a new ID card, Alon Altman, told The Guardian.

In June 2017, Oregon became the first state in the country to offer a third gender marker on official documents for "nonbinary, intersex and agender people," according to NBC News. The rule went into effect in July 2017. "We must proactively break down the barriers of institutional bias," Oregon Gov. Kate Brown told NBC News when the rule passed the state Transportation Commission.

While a handful of states have passed these laws, entire countries have as well. Canada introduced a third gender marker on passports in August 2017, according to The Guardian, joining Australia, New Zealand, Germany, and Pakistan in their efforts to provide accurate documentation with third gender markers.