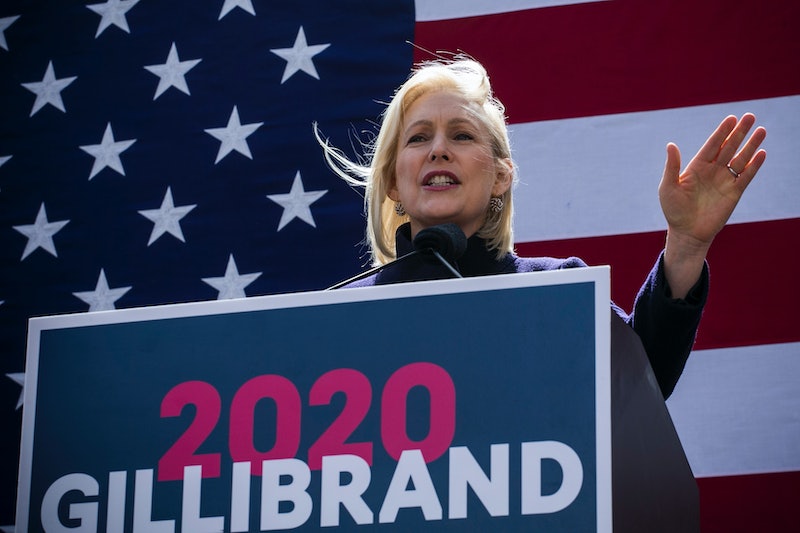 One 2020 presidential candidate is making family life a priority in her campaign — and she just unveiled a new proposal that highlights her commitment to the issue. Sen. Kirsten Gillibrand's "Family Bill of Rights" seeks to ensure that parents' and children's rights are respected and promoted. The senator has committed to passing the sweeping proposal within her first 100 days in office if she's elected president.

Gillibrand's proposal includes a host of investments and protections aimed at improving families' quality of life, As The New York Times reported. Per a Medium post about the plan, some of these initiatives include establishing a national paid family leave program, expanding the child and dependent care tax credit, helping states create comprehensive pre-kindergarten programs, and launching various programs to improve maternal health, among others.

In a statement announcing her proposal, the senator emphasized that she believes it will help "level the playing field" when it comes to ensuring that parents' and children's needs are met. As the senator put it, per The Hill:

My new proposal, the Family Bill of Rights, will make all families stronger — regardless of who you are or what your zip code is — with a fundamental set of rights that levels the playing field starting at birth ... I believe it will transform American families and their ability to achieve the American Dream.

In her Medium post, Gillibrand noted that the initiatives in her proposal are intended to ensure that five primary rights are met. The senator indicated that these rights include: the right to affordable early education and child care; the right to care for family members while still being compensated by your employer; the right to a home nursery that's cost-effective and safe; the right to have a child via birth or adoption; and the right to a safe pregnancy.

Gillibrand also emphasized on Medium that she hopes that her proposal will help make the issues that parents and children face a policy priority. "For too long, crucial issues that inform the well-being of whole families and communities  —  from paid leave to child care to maternal health care  —  have been dismissed as secondary issues or 'women’s issues,'" the senator wrote. "I’ve spent my career fighting for those issues as what they are: front-and-center determinants of our whole country’s economic security, opportunity, and success."

Gillibrand isn't the only 2020 candidate seeking to prioritize family-oriented policies. As CBS News described, this month Senator Cory Booker introduced a bill aimed at decreasing maternal mortality, and earlier this year, Senator Elizabeth Warren introduced the "Universal Child Care and Early Learning Act." The Hill also added that Warren and Senator Kamala Harris have both introduced plans to reduce the maternal mortality rate among black women — an issue that has reached a crisis point in the United States, per The New York Times.

Gillibrand's proposal, along with other candidates' initiatives, makes it clear that children's and parents' rights and needs are going to play an important role in the 2020 election. As campaigning continues, many Americans will likely be watching to see how the diverse field of candidates continues to address these issues.