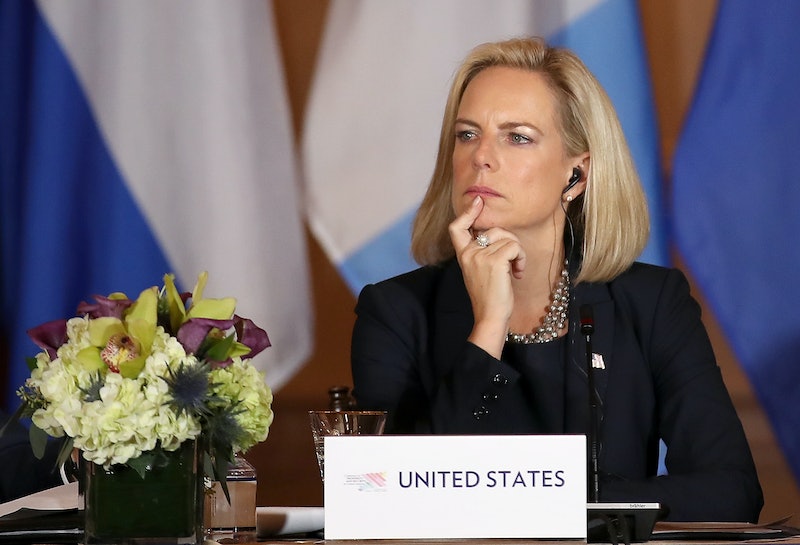 For the past week, the president has raised the alarm on a caravan of Central American migrants headed toward the United States. Trump has tweeted that his administration would not be letting "people into the United States illegally." And on Sunday, his Homeland Security Secretary echoed the sentiment. Kirstjen Nielsen's message to the migrant caravan as it approaches the border minced no words: she made her intention clear that the caravan “is not getting in."

“My general message to this caravan is: Do not come,” Nielsen said during Fox News Sunday. “You will not be allowed in. There is a right way to immigrate to the United States, and this is not it.”

Since the caravan formed (borne from a domestic political fight in Honduras in a move to undercut the newly reelected president, according to The New York Times), the numbers have ballooned to more than 7,000 people. But along with the statement against the Honduran president, The New York Times noted, those who joined may have also done so because of the gang violence in their countries as well as the crippling poverty and unemployment.

“We have a crisis at the border right now ... [and] this caravan is one iteration of that,” Nielsen said. “Frankly, we essentially see caravans every day with these numbers.”

The migrants have been traveling for the past two weeks, with many applying for asylum. The United Nations refugee agency recently reported that around 1,500 people filed claims for asylum in Mexico. During her interview, Nielsen pointed out that the Mexican government has extended asylum to some caravan members, and she urged the traveling migrants to settle south of the United States border instead.

In response to the approaching caravan, the U.S. military has been delivering jersey barriers to the Mexican border as a part of the plan to deploy troops there, U.S. Defense Secretary Jim Mattis said Sunday, according to Time. The presence of the troops will provide aid to the Border Patrol as well as the the approximately 2,000 National Guard forces already gathered at the border.

Along with enforcement, the additional forces will offer logistical assistance in air, vehicle and tent support, Time reported.

Migrants in the caravan have told CNN that the Trump administration's plans to deploy troops has not discouraged them from continuing on until they reach the border. At this point, depending on the daily route and health of the migrants, it's still unclear when the migrants will reach the border, and it's likely that they'll still be in the middle of Mexico when Election Day arrives.