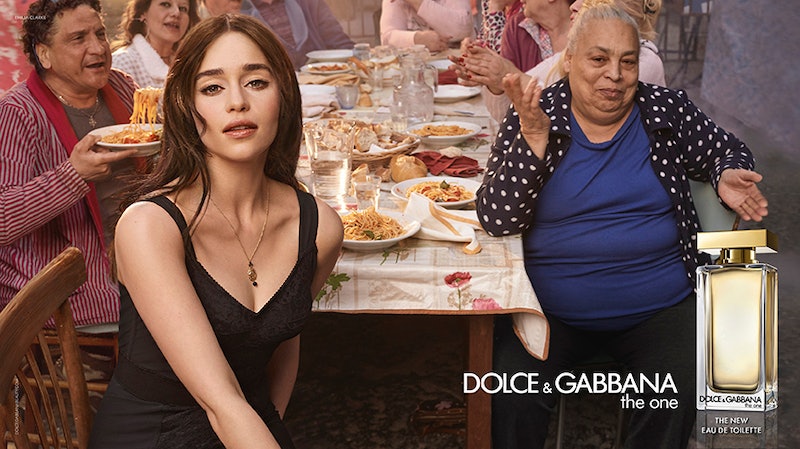 Kit Harington and Emilia Clarke are two of the most talked-about people on the internet right now — or, at least, their Game of Thrones characters Jon Snow and Daenerys Targaryen are. And while the news of Harington and Clarke landing Dolce & Gabbana ads is going to have a tough time topping that scene (you know the one) when it comes to making fans froth, folks are still completely stoked to see the couple again.

Both Harington and Clarke were tapped to become the faces of D&G's The One fragrance line, with Harington starring in an ad for The One for Men and Clarke starring in an ad for The One Eau de Toilette. Clarke's ad went live on YouTube Sept. 1, while Harington's went live Sept. 4 — and, to the disappointment of some fans, there's no crossover between the two.

Harington and his fantastic hair starred in an ad mirroring Clarke's: Both GoT actors filmed their cheery, dancing-filled spots in an open market in Naples, France, according to the ads' official captions.

For fans wanting to see more of Harington and Clarke, there are behind-the-scenes vids available on D&G's website, and on its YouTube channel.

While it's totally possible D&G will drop an ad featuring both Harington and Clarke in the future, for now fans can be content that even if they won't be able to see the pair onscreen until season eight of GoT premieres, they can tide themselves over by basking in Harington and Clarke's IRL friendship.

The two seem to get along fantastically, with Harington telling People in July 2017, "I was sort of bowled over by this absolutely stunning, petite girl with this wicked sense of humor. We became very fast friends quite quickly."

And now, of course, fans are treated to antics like the Instagram video of Harington's hilarious fur-draped version of a dragon flapping its wings. Clarke posted the video, in which she can be heard giggling the whole time, and captioned it, "I mean, JEEEZE, one pet of a dragon and he thinks he's one of them."

The wait for GoT's eighth season is likely to be torturous, but if at any point it becomes too unbearable, take a look at Harington and Clarke's smiling faces and savor their pure, uncomplicated happiness...while you still can.