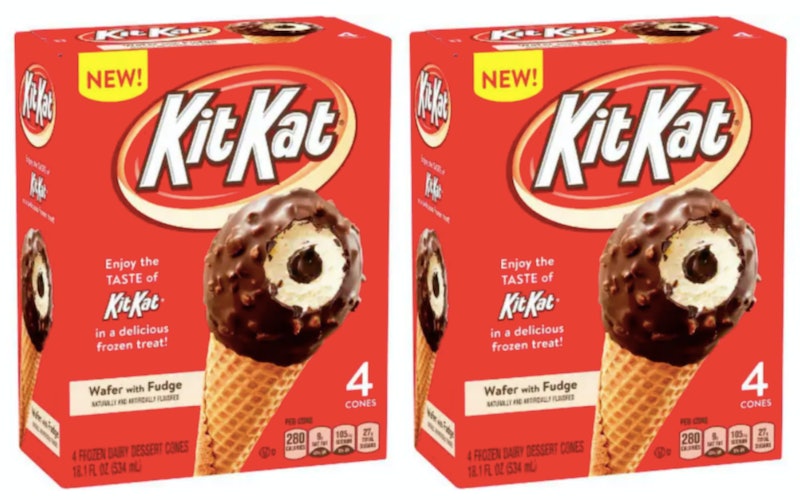 KitKat lovers, your day in the sun is finally here. The iconic line of breakable chocolate bars is branching out into other decadent dessert items — and this time, you'll be able to find the candy brand featured in the frozen aisle. That's right, frozen KitKat Drumsticks, released by Nestlé, are officially on shelves (aka, it's time to drop everything and make an impromptu trip to your local grocery store). If you're someone who firmly supports the presence of chocolate candy in ice cream, this product just might be the latest staple in your freezer.

Over the years, Nestlé's beloved Drumstick line has featured tons of different flavors — from their Classic Vanilla with its chocolate shell sprinkled with roasted peanut bits, Mint and Peppermint chocolate renditions, a toasted S'mores drumstick, and even one that has Butterfinger candies inside of it. The KitKat drumstick, however, is the first of its kind (and will hopefully inspire Nestlé to release more candy-filled flavors). The treats include the bar's signature wafer bits within the chocolate shell, a fudge-filled center, and vanilla ice cream. According to food bloger SnackGator, who recently got their hands on it from Kroger, the newest addition to the Drumstick line is a "game changer." I'll take 12, please.

So far, the only grocery chain that lists the KitKat Drumsticks on their website is Kroger — but since the item is fairly new we can probably expect it to hit the shelves at other retailers in the future. The frozen desserts come in a pack of four, and the packaging honestly looks like one giant KitKat bar (I wouldn't want it any other way).

If this news has inspired you to search for other KitKat-filled sweets, you're in luck. The candy bar line is also featured in Dreyer's Ice Cream in the form of a flavor especially dedicated to the chocolatey wafer bars. Their KitKat ice cream, which includes a wafer swirl and bits of KitKat chocolates, can be found at Target (and definitely looks like it's worth a try). If it's other Drumstick flavors that you've been wanting to get your hands on, you'll also find some delicious gems. SnackGator took to Instagram to post a rare Drumstick flavor that they spotted in store: Dulce de Leche. Yes, it looks as amazing as it sounds, with Dulce de Leche shells that feature vanilla or caramel ice cream and come with a variety of caramel or fudge interiors. It seems like it's been a pretty amazing month for ice cream.

Next time you head for a grocery run, stop by the frozen aisle and see if you can spot any brand new items. When you're the first to discover it, you have the benefit of being able to stock up before everyone else also realizes how delicious they are and they start to sell out. It seems like brands are catching onto the fact that sometimes classic vanilla or chocolate soft serve just won't cut it, and hey — who's going to say no to a bigger variety of sweets?